Footage taken by witnesses and broadcast by Peruvian television channels showed the plane -- an Airbus A320, according to aircraft tracking websites -- taking off at full speed and hitting the fire truck, also travelling at speed. 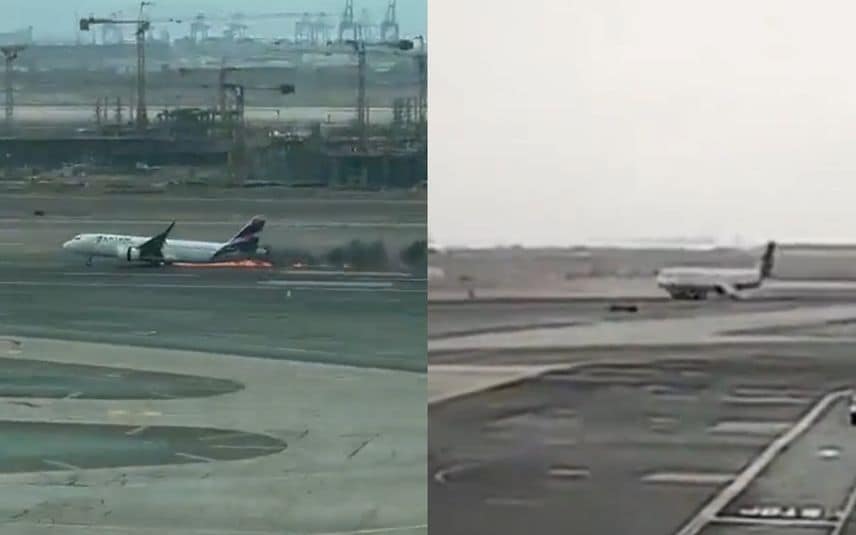 Lima: Two firefighters were killed Friday at Lima's airport when a passenger plane hit their fire truck during takeoff then crashed on the runway, officials said.

The airline LATAM, which operated the domestic flight, said 102 passengers were aboard the plane but added that "no passengers or crew members lost their lives."

Footage taken by witnesses and broadcast by Peruvian television channels showed the plane -- an Airbus A320, according to aircraft tracking websites -- taking off at full speed and hitting the fire truck, also travelling at speed.

The plane continued its course with its right side dragging along the runway, sending up a trail of flames and smoke. The rear of the aircraft was badly burned.

Lima Airport Partners (LAP) which operates the Jorge Chavez airport said it "deeply regrets the loss of life of two members of the LAP Aeronautical Fire Brigade in the accident that occurred between a fire engine and the aircraft operating flight LA2213 from Lima to Juliaca."

LAP added that its "teams are providing the necessary care to all passengers, who are doing well."

"We are also investigating to determine the cause of the incident," it added.

Lima firefighters said the alarm was sounded at 3:25 pm local time (2025 GMT) and four ambulances and rescue units were deployed.

The prosecutor's office said it would launch an investigation into the "possible crimes of culpable homicide and culpable injuries."

Airport operations have been suspended "until further notice," the management company said.

Last month, a LATAM plane with 48 passengers onboard made an emergency landing in Asuncion, Paraguay after flying through a severe storm.