Noting that Barrett was confirmed to the Circuit Court three years ago by a bipartisan vote, Trump said her qualifications are unsurpassed and her record is beyond reproach. 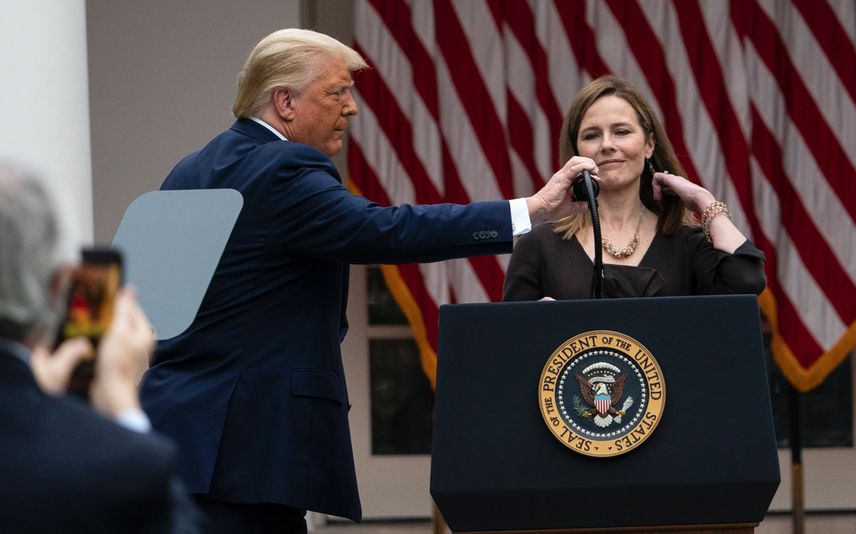 Washington: US President Donald Trump has nominated Judge Amy Coney Barrett for the Supreme Court to fill up the vacancy following the death of Judge Ruth Bader Ginsberg.

Barrett, 48, is currently a judge on the 7th Circuit Court of Appeals, for which she was nominated by Trump in 2017.

"Today it is my honour to nominate one of our nation's most brilliant and gifted legal minds to the Supreme Court. She is a woman of unparalleled achievement, towering intellect, sterling credentials and unyielding loyalty to the Constitution, Judge Amy Coney Barrett," Trump announced in the Rose Garden of the White House on Saturday.

Barrett, who lives in Indiana with her husband and their seven children, needs to be confirmed by the Senate.

Justifying the nomination, less than 40 days before the crucial presidential election on November 3, Trump said this is his highest and most important duties under the United States Constitution.

With Judge Barrett, Trump has nominated three judges on the none-member bench of the US Supreme Court. The other two being justices Neil Gorsuch and Brett Kavanaugh.

A graduate of Rhodes College and the University of Notre Dame Law School, Professor Barrett is a woman of remarkable intellect and character, Trump said.

Trump said Barrett will decide cases based on the text of the Constitution as written.

"As Amy has said being a judge takes courage, you are not there to decide cases as you may prefer, you are there to do your duty and to follow the law wherever it may take you. That is exactly what Judge Barrett will do on the US Supreme Court,” he said.

Noting that Barrett was confirmed to the Circuit Court three years ago by a bipartisan vote, Trump said her qualifications are unsurpassed and her record is beyond reproach.

"This should be a straightforward and prompt confirmation, should be very easy. Good luck. It's going to be very quick. I'm sure it will be extremely non-controversial," he said.

In her brief address, Judge Barrett said that she is truly humbled by the prospect of serving on the Supreme Court.

"Should I be confirmed, I will be mindful of who came before me. The flag of the United States is still flying at half-staff in memory of Justice Ruth Bader Ginsburg, to mark the end of a great American life. Justice Ginsburg began her career at a time when women were not welcome in the legal profession. But she not only broke glass ceilings, she smashed them. For that, she has won the admiration of women across the country and, indeed, all over the world," Berrett said.

Democratic presidential candidate and former vice president Joe Biden has urged the Senate not to act on the vacancy until the American people select their next president and the next Congress.

The Senate is controlled by the Republicans. Senate Majority Leader Mitch McConnell has already said that he will go ahead with the nomination and confirmation process.

"Trump's hand-picked successor to Justice Ginsburg's seat makes it clear: they intend to destroy the Affordable Care Act & overturn Roe. This selection would move the court further right for a generation and harm millions of Americans," she said.

Currently a judge on the US Court of Appeals for the Seventh Circuit since 2017, she was the Diane and MO Miller, II Research Chair in Law and Professor of Law at Notre Dame Law School, where her scholarship focused on constitutional and statutory interpretation and the Federal courts.

Barrett has also served as a Visiting Associate Professor of Law at the University of Virginia Law School and the John M Olin Fellow in Law at George Washington University Law School. Earlier in her career, she practiced at the prestigious law firms Miller, Cassidy, Larroca & Lewin LLP and Baker Botts LLP.

She clerked on the Supreme Court for Justice Antonin Scalia and for Judge Laurence H Silberman on the US Court of Appeals for the DC Circuit.

Barrett is known for her keen intellect, piercing legal analysis and generous spirit.

House Speaker Nancy Pelosi, in a statement, said that Trump is exploiting this vacancy against the clear and overwhelming will of the American people, as he dismantles the pillars of health and economic security in America.

"Every vote to confirm this nominee is a vote to dismantle healthcare. The American people will hold every senator responsible for their vote at the ballot box.

"If this nominee is confirmed, millions of families' healthcare will be ripped away in the middle of a pandemic that has infected seven million Americans and killed over 200,000 people in our country," Pelosi added.