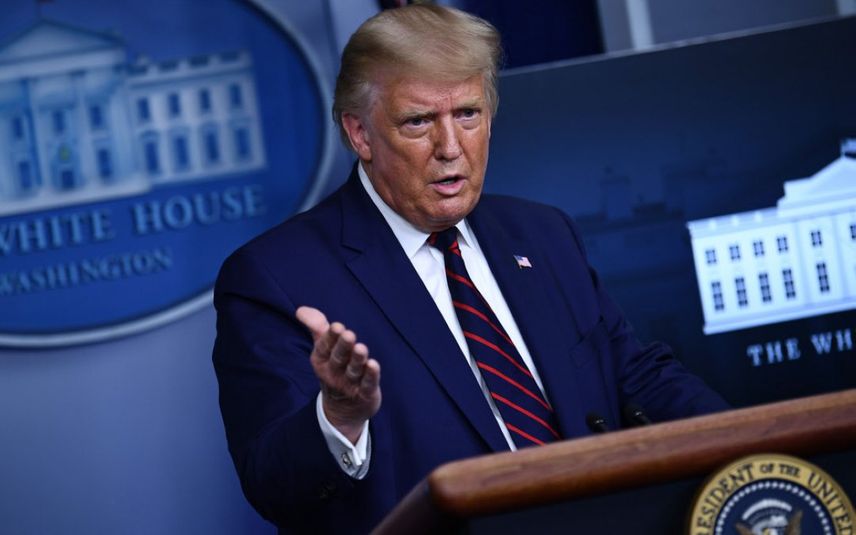 Washington: President Donald Trump was hospitalized Friday and given an experimental Covid-19 treatment, but said he was "well," following bombshell news that the Republican had contracted the virus, knocking him off the campaign trail a month from the US election.

After having not been seen in public since his shock announcement that he and first lady Melania Trump tested positive for the coronavirus, the president walked out of the White House Friday evening, wearing a mask, and flew by helicopter to the Walter Reed military hospital outside Washington.

In an 18-second video recorded inside the White House and released on Twitter, Trump broke his silence, saying he was being hospitalized but "I think I'm doing very well."

"We're going to make sure that things work out," he said, adding that the first lady was also "doing very well."

Press Secretary Kayleigh McEnany said in a statement that medical experts recommended Trump "be working from the presidential offices at Walter Reed for the next few days."

The hospitalization indicated an intense effort to make sure the president's reportedly "mild" symptoms do not deteriorate.

The development also highlighted the uncharted waters for the US election on November 3, with Trump -- who is well behind his Democratic opponent Joe Biden in the polls -- having to freeze much of his campaign.

At first, aides gave rosy assessments, with Trump's chief of staff Mark Meadows saying the president, 74, had only mild symptoms, was in "good spirits" and feeling "very energetic."

Conley said Trump received a single dose of Regeneron's antibody cocktail, a treatment undergoing clinical trials but not yet approved by regulators.

"He's being evaluated by a team of experts, and together we'll be making recommendations to the President and First Lady in regards to next best steps," Conley wrote.

Trump's illness upended the White House race, with Biden suddenly finding himself alone on the campaign trail -- and able to argue that his distinctly more cautious approach to Covid-19 had been vindicated.

Biden has made Trump's frequent downplaying of the pandemic and mixed messaging on mask-wearing a central campaign theme, arguing the president is to blame for the scale of the crisis in the United States, where more than 200,000 people have died.

Trump has tried repeatedly to shift the narrative to areas where he feels stronger, like the economy, only to find himself drawn back into the coronavirus catastrophe in which he is now the country's highest-profile patient.

Biden, who stood in close proximity to Trump for 90 minutes during their ill-tempered first debate Tuesday in Cleveland, announced that he and his wife Jill took tests Friday and were negative.

Underlining his sudden advantage in the bitter race, Biden, 77, traveled to Grand Rapids, Michigan, going ahead with a previously scheduled campaign stop.

Biden said he was praying for Trump and his family, and his campaign announced it would take down all negative ads.

However, Biden also reminded Americans that he has pushed consistently for taking coronavirus seriously, unlike his opponent who has repeatedly mocked the Democrat for his rigorous use of masks yet now finds himself infected.

"Be patriotic," Biden told supporters in Michigan through a blue surgical mask. "It's not about being a tough guy. It's about doing your part."

Trump's shock diagnosis was a huge blow to his reelection effort, triggering a freeze on plans to barnstorm the country in an attempt to catch up in the polls with Biden.

The Trump campaign said all planned events involving the president were either being postponed or going virtual -- starting with the cancellation of a rally Friday in Florida, one Saturday in Wisconsin and others in western states like Arizona next week.

Even the second Trump-Biden debate, scheduled for October 15, is now in some doubt.

Rallies are such a key part of the Trump brand that his sudden inability to travel leaves the campaign scrambling to reinvent its strategy. In addition, Trump has made his argument that coronavirus dangers are overblown a central plank in his reelection platform.

How he can recover momentum will depend first on his health but then how quickly he can come up with a convincing new message in the waning days before November 3.

News of Trump's infection came after one of his closest advisors, Hope Hicks, tested positive -- sparking fears of a cluster of cases emanating from the heart of the White House.

Trump met with dozens of people through the week and reportedly went to a fundraiser in New Jersey after it was known that Hicks had contracted the virus.

The White House said it was carrying out contact tracing, while Melania Trump's spokeswoman said the couple's 14-year-old son Barron had tested negative.

Vice President Mike Pence and other senior figures were tested and announced to be negative. The White House said Supreme Court nominee Amy Coney Barrett was a negative too.

Technically obese and in his 70s, Trump is in a higher-risk category.