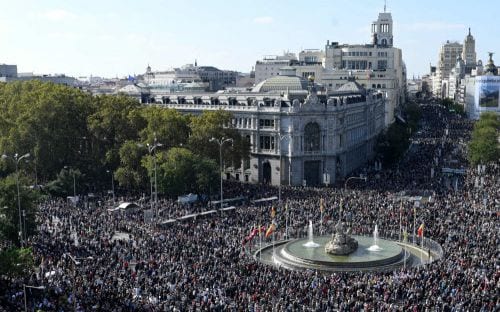 Hundreds of thousands of protesters gather at the Cibeles square during a demonstration called by citizens under the slogan 'Madrid stands up for its public health. Against the destruction of primary health care' in Madrid on November 13, 2022 | Photo: AFP

Madrid: Tens of thousands of Spanish public health workers and their supporters staged a demonstration Sunday to demand more primary health care staff and protest what they claim is the progressive dismantling of the public health system in favor of private providers by the conservative regional government in Madrid.

The protest in the Spanish capital, dubbed the ‘white tidal wave’ because of the white medical coats worn by many protesters, took place under the slogan “Madrid rises up for public health.”

The Madrid region is at the center of the protests. Partial walkouts started in the region last Monday, with an all-out strike called for Nov. 21 for nearly 5,000 Madrid doctors.

The protest was called by neighborhood associations, labor unions and leftist political parties.

The Madrid regional government led by the Popular Party's Isabel Ayuso has come under fire in recent years, and especially since the COVID-19 pandemic started in 2020, for poor staffing in hospitals and primary health care centers.

Organizers say that though Madrid is the Spanish region with the highest income per capita it is also the one that spends the least amount per capita on primary health care. They claim that for every 2 euros spent on health care in Madrid, one ends up in the private sector.

“The people of Madrid deserve quality primary health care and not delays of more than a week to see family doctors or pediatricians,” the AMYTS doctors’ union says.

Ayuso denies there are staff shortages and claims the protests and strikes are being orchestrated by left-wing parties in the run-up to municipal and regional elections next year.