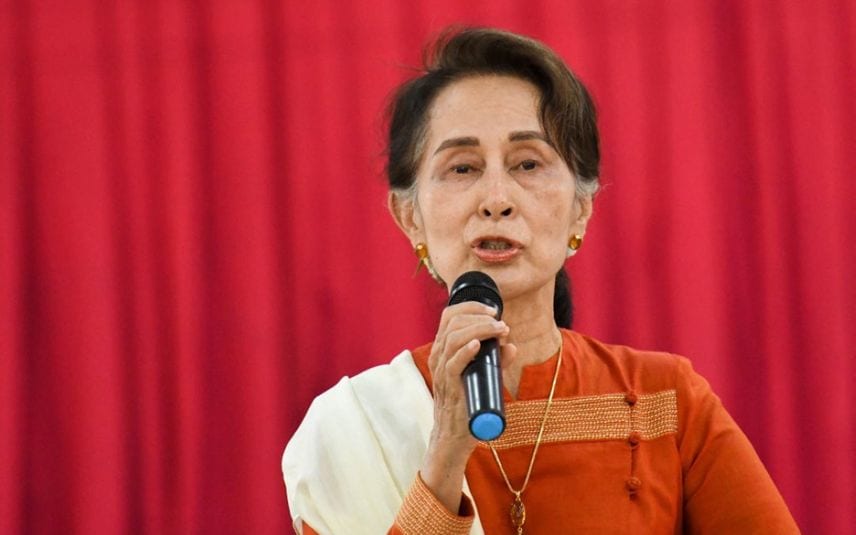 Suu Kyi received a three-year sentence after being convicted with Turnell under the secrets law, said the official, who spoke on condition of anonymity because he is not authorised to release information about the case.

Three members of her Cabinet were also found guilty, each receiving sentences of three years.

Turnell was also convicted of violating immigration law, for which he was given a three-year sentence to be served concurrently with the term for violating the secrets law. The 20 months he has already spent in detention will be deducted from his sentence, leaving him less than a year and a half to serve.

Turnell, 58, an associate professor in economics at Sydney's Macquarie University, had served as an adviser to Suu Kyi, who was detained in the capital Naypyitaw when her elected government was ousted by the army on Feb. 1, 2021.

Family and friends expressed hope he will soon be freed and deported, as has occurred with other foreigners in Myanmar convicted of political offenses, though less serious ones.

“It's heartbreaking for me, our daughter, Sean's 85-year-old father, and the rest of our family to hear that my husband, Professor Sean Turnell, was convicted and sentenced to 3 years' imprisonment," his wife Ha Vu, also an economist, said on her Facebook page. "Sean has been one of Myanmar's greatest supporters for over 20 years and has worked tirelessly to strengthen Myanmar's economy."

“My husband has already been in a Myanmar prison for almost 2/3 of his sentence,” she added. "Please consider the contributions that he has made to Myanmar, and deport him now!"

Australian Foreign Minister Penny Wong's office rejected the court's ruling and called for Turnell's immediate release. Decrying that he had been “unjustly detained,” her office said Australian diplomats were denied access to the court hearing for the verdict.

“We will continue to take every opportunity to advocate strongly for Professor Turnell until he has returned to his family in Australia,” it said in a statement.

Tim Harcourt, a longtime friend, said Turnell is "a great economist, nice bloke and a great human being. His main cause in life is to reduce poverty around the world and he'd developed particular expertise in Myanmar.”

"Hopefully common sense and justice can prevail and Sean can return to his wife and family in Australia soon,” said Harcourt, a professor at the University of Technology Sydney.

Turnell was arrested five days after the military takeover by security forces at a hotel in Yangon, the country's biggest city. He had arrived back in Myanmar from Australia less than a month before that to take up a new position as a special consultant to Suu Kyi. As director of the Myanmar Development Institute, he had already lived in Naypyitaw for several years.

The day after the military's takeover, he posted on Twitter: “Safe for now but heartbroken for what all this means for the people of Myanmar. The bravest, kindest people I know. They deserve so much better.”

The five co-defendants were charged on the basis of documents seized from Turnell. The exact details of their offense have not been made public, though state television said last year that Turnell had access to “secret state financial information” and had tried to flee the country.

Turnell and Suu Kyi denied the allegations when they testified in their defense at the trial in August.

Myanmar's colonial-era official secrets act criminalizes the possession, collection, recording, publishing, or sharing of state information that is “directly or indirectly, useful to an enemy.” The charge carries a maximum penalty of 14 years in prison.

The trial, like the others involving Suu Kyi, was held in a purpose-built prison courtroom and was closed to the media and the public. Defense lawyers were barred by a gag order from revealing details of the proceedings.

The multiple criminal cases brought against the 77-year-old Suu Kyi are widely seen as an effort to discredit her and to prevent her return to politics.

She had already been sentenced to 20 years' imprisonment after being convicted of illegally importing and possessing walkie-talkies, violating coronavirus restrictions, sedition, election fraud and five corruption charges.

Suu Kyi is still being tried on seven counts under the country's anti-corruption law, with each count punishable by up to 15 years in prison and a fine.

Defense lawyers are expected to file appeals in the secrets case in the coming days for Turnell, Suu Kyi and three former ministers: Soe Win and Kyaw Win, both former ministers for planning and finance, and Set Aung, a former deputy minister in the same ministry, the legal official said.

Australia has repeatedly demanded Turnell's release. Last year, it suspended its defense cooperation with Myanmar and began redirecting humanitarian aid because of the military takeover and Turnell's ongoing detention.

Cambodian Prime Minister Hun Sen, when he visited Myanmar in January this year, asked for Turnell's release in a meeting with the leader of ruling military council. Senior Gen. Min Aung Hlaing replied that he “would consider it positively.”

The U.N. Special Envoy on Myanmar Noeleen Heyzer said she conveyed a specific request from Australia for Turnell's release when she met with Min Aung Hlaing in August. Myanmar's government said the general replied that, should the Australian government take positive steps, “we will not need to take stern actions.”

According to the Assistance Association for Political Prisoners, a rights monitoring organization, 15,683 people have been detained on political charges in Myanmar since the army takeover, with 12,540 of those remaining in detention. At least 2,324 civilians have been killed by security forces in the same period, the group says, though the number is thought to be far higher.

Myanmar has been in turmoil since the takeover, which led to nationwide protests that the military government quashed with deadly force, triggering armed resistance that some UN experts now characterize as civil war.