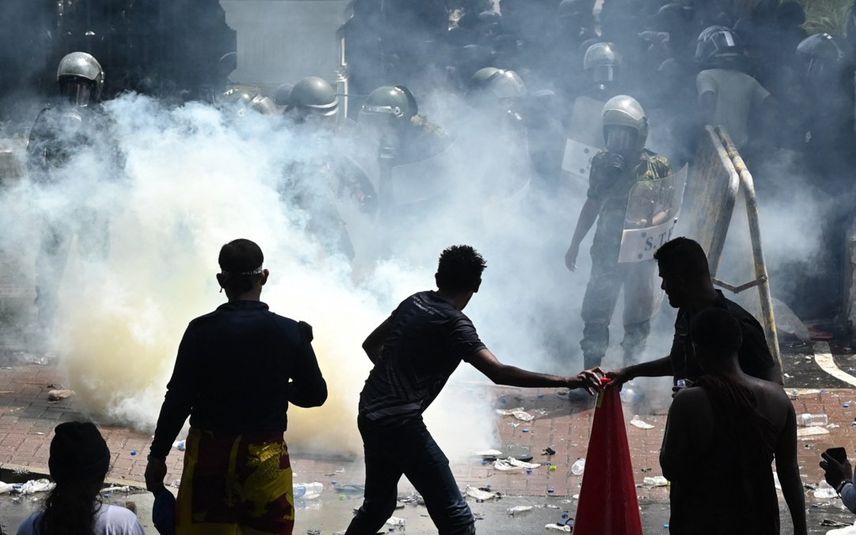 Army personnel use tear gas to disperse demonstrators during an anti-government protest outside the office of Sri Lanka's prime minister in Colombo. Photo: AFP

Colombo: Sri Lanka's military and the police on Wednesday requested the Speaker of Parliament to call an all-party leaders' meeting and inform them of the steps they will take to ensure a political resolution to the "current conflict" in the run up to the appointment of a new president.

In a statement, Chief of Defence Staff General Shavendra Silva made "a special appeal" to the people, especially the youth, to support the three forces -- Army, Navy and Air Force -- and the police to maintain law and order in the county.

He urged protesters not to vandalise state or private property.

“We, the tri-forces commanders and the Inspector General of police have requested the Speaker (Mahinda Yapa Abeywardena) to call an all-party leaders meeting and inform us of the steps they will take to ensure a political resolution to current conflict in the run up to the appointment of a new president," Silva said in a televised address flanked by the heads of Air Force, Army, Navy and Police.

“Until these decisions are made and a new president is elected, we appeal to the public to support the military and police to maintain peace and law and order,” he said.

Sri Lanka is witnessing an escalating political crisis and a fresh wave of protests triggered by the fleeing of embattled President Gotabaya Rajapaksa from the country.

Defying the emergency, thousands of protesters waving Lankan flags surrounded the building of the Prime Minister's Office earlier in the day.

The police fired tear gas on protesters who broke through a barricade and stormed the prime minister's office, calling for his resignation as well as that of the president.

Embattled President Rajapaksa fled to the Maldives on a military jet in the morning, hours before he was supposed to quit in the face of a public revolt against his government for mishandling the economy that has bankrupted the country.

From the Maldives, the 73-year-old leader appointed Prime Minister Wickremesinghe as the Acting President, citing Article 37(1) of the Constitution that allows a premier to "discharge the powers, duties and functions of the office of president" when the president is ill or "absent" from the country.

Speaker Abeywardena has said President Rajapaksa has informed him over telephone that he will resign today as promised. He said the vote for the new president will take place on July 20.

Wickremesinghe has declared a state of emergency in the country and a curfew in the Western province has been imposed as protesters gathered near his office at Flower Road in Colombo.