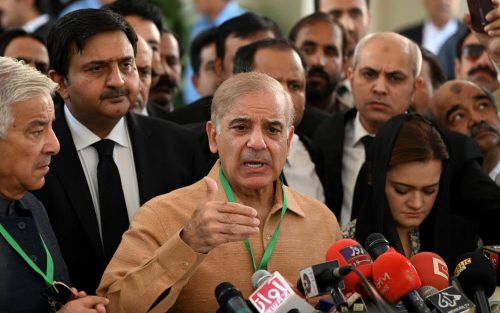 Shehbaz Sharif (C) addresses the members of the media

Islamabad: Imran Khan was dismissed Sunday as Pakistan's prime minister after losing a no-confidence vote, paving the way for an unlikely opposition alliance that faces the same issues that bedevilled the cricket star-turned-politician.

His first task will be to form a cabinet that will draw also heavily from the centre-left Pakistan Peoples Party (PPP), as well as find space for the smaller conservative Jamiatul Ulema-e-Islam-F (JUI-F) group.

The PPP and PML-N are dynastic parties that have dominated Pakistani politics for decades -- usually as bitter rivals -- and their relations are sure to fray in the lead up to the next election, which must be held by October 2023.

Khan's exit was met with a mixture of glee and sympathy.

"Back to the pavilion," screamed the influential Express Tribune newspaper, using a cricket metaphor headline writers have found difficult to resist during Khan's tenure.

No prime minister has ever served a full term in Pakistan, but Khan is the first to lose office via a vote of no-confidence.

There had been high hopes for Khan when he was elected in 2018 on a promise of sweeping away decades of entrenched corruption and cronyism, but he struggled to maintain support with soaring inflation, a feeble rupee and crippling debt.

Militancy is also on the rise, with Pakistan's Taliban emboldened by the return to power last year of the hardline Islamist group in neighbouring Afghanistan.

Khan had vowed to fight "until the last ball", and he certainly took his exit to the wire Sunday.

He tried everything to stay in power -- including dissolving parliament and calling a fresh election -- but the Supreme Court deemed all his actions illegal last week, and ordered the assembly to reconvene and vote.

Still, there was drama right until the midnight deadline ordered by the court, with the speaker of the assembly -- a Khan loyalist -- resigning at the last minute.

The session restarted after midnight with a replacement, and the vote was finally held.

Khan's Tehreek-e-Insaf (PTI) lawmakers stormed out, but the no-confidence motion passed with 174 votes in the 342-seat assembly.

New Pakistan governments frequently have a reckoning with those they replace, but Sharif said there would be no vendettas.

"We will put a balm on the wounds of this nation," he said immediately after the result was announced.

Khan insists he has been the victim of a "regime change" conspiracy involving Washington, and he is certain to tap into anti-US sentiment from the opposition benches.

"His narrative of last few months, that he has been removed through a foreign conspiracy, has earned him some support."

Khan says the PML-N and PPP conspired with the United States to bring the no-confidence vote because of his non-aligned international outlook and opposition to US foreign policy, particularly in Muslim nations such as Iraq and Afghanistan.

He vowed late Friday to never support any incoming new government and has called supporters for a rally in the capital later Sunday.

"From what he has been saying, he seems to want to create problems for the government and pursue a kind of a policy of trying to sort of rebel rather... make things better for the country and society," said Talat Masood, a former general and now political analyst.

Publicly, the military appears to be keeping out of the current fray, but there have been four coups since independence in 1947, and Pakistan has spent more than three decades under army rule. AFP