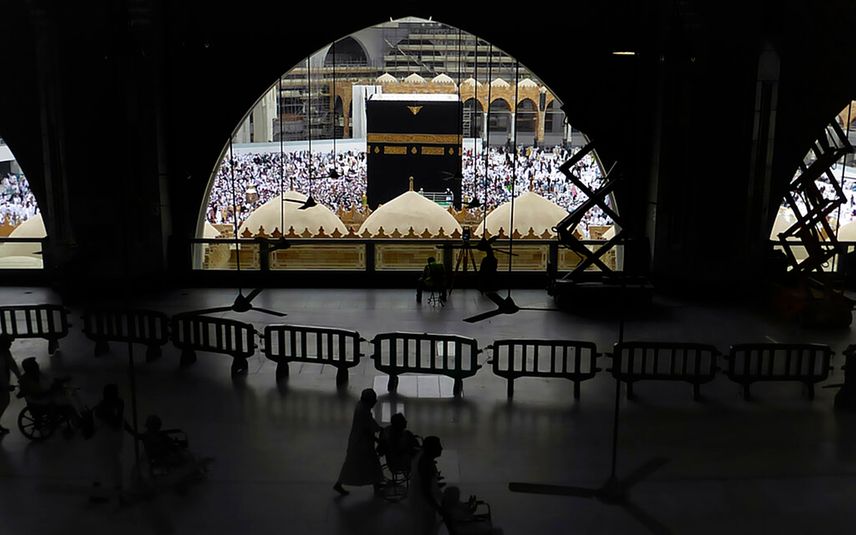 Muslim pilgrims circumambulate around the Kaaba, the cubic building at the Grand Mosque, during Umrah in the holy city of Mecca, Saudi Arabia. (AP photo)

Cairo: Saudi Arabia's unprecedented decision to halt the umrah pilgrimage amid the global outbreak of a new virus could prevent millions of Muslims from undertaking a major religious rite that many spend years saving up for.

Unlike the hajj pilgrimage, which takes place once a year and is required for all Muslims who are able to undertake it, the lesser umrah pilgrimage can be performed year-round. Nearly 20 million Muslims undertake the umrah pilgrimage each year, including more than 7 million foreign travellers.

Here is a look at the umrah pilgrimage and the implications of the decision to halt it.

WHAT IS THE UMRAH?

Just like the five-day hajj, which annually brings 2-3 million pilgrims to Saudi Arabia from around the world, umrah is centered on the holy cities of Mecca and Medina and includes rituals dating back to the Prophet Muhammad, who founded Islam in the 7th century.

Pilgrims begin by entering a state of physical and spiritual purity known as "ihram." Women forgo makeup and perfume and wear loose-fitting clothing and a head covering, while men dress in seamless, white terrycloth garments.

They begin in Mecca, where they circle the black, cube-shaped Kaaba, the holiest site in Islam, seven times. Muslims believe the Kaaba was built on the site where God ordered the prophet Ibrahim to sacrifice his son Ismail in a test of faith before ultimately staying his hand. It's an alternative version of the biblical story of Abraham and Isaac.

Pilgrims then trace the path of Hagar, the wife of Ibrahim, who Muslims believe ran between two hills seven times searching for water for her dying son. Tradition holds that God then brought forth a spring that runs to this day. The sacred well of Zamzam is believed to possess healing powers, and pilgrims often return with bottles of its water as gifts.

Both rites are performed in Mecca's Grand Mosque. Male pilgrims then shave their heads in a sign of purity and completion of the pilgrimage. Pilgrims often perform umrah as part of the hajj, which is one of the five pillars of Islam.

WHAT DOES THE UMRAH MEAN FOR MUSLIMS?

As with the hajj, those who undertake umrah try to shed the trappings of materialism and grow closer to God and their fellow Muslims. The pilgrimage attracts Muslims from all over the world and every walk of life, but once they enter the state of ihram, everyone appears and is treated as an equal.

Poorer Muslims may spend years saving up to perform hajj or umrah, which are seen as major life events. In poorer districts across the Middle East, families decorate the outer walls of their homes with paintings of the Kaaba, airplanes and ships to commemorate the journey.

The umrah has become even more important in recent years as millions of Muslims fall outside the Saudi-imposed quotas for participation in the hajj. In countries with large and rapidly growing Muslim populations, aspiring pilgrims can languish for years on waiting lists. For many of them, umrah may be the only way to pray at Islam's holiest sites.

WHAT DOES IT MEAN FOR SAUDI ARABIA?

The Saudis' custodianship of the two holy cities and hosting of the pilgrimages is a major source of legitimacy and prestige in the Muslim world. An outbreak in Mecca and Medina would not only risk spreading the illness throughout Saudi Arabia and further afield, but would also embarrass the monarchy.

Saudi Arabia's arch-rival Iran has emerged as a major focal point of the global outbreak. At least 26 Iranians have died from the COVID-19 disease, and it has been linked to most of the more than 350 confirmed cases across the region. Iran's death toll is the highest of any country outside of China, where the outbreak began.

Iran has come under heavy criticism over a lack of transparency regarding the virus, especially after its own deputy health minister tested positive for it. The epicenter appears to be in the Shiite holy city of Qom, where pilgrims kiss and touch a famous shrine.

The Saudis risk losing tens of millions of dollars a day as hotels and other establishments empty out, but the cost of containing an outbreak could be much higher.

HAS THIS EVER HAPPENED BEFORE?

The pilgrimage would pose a major risk in the event of an outbreak. The new virus is easily transmitted from person to person, but carriers often show no symptoms. That would allow it to spread like wildfire among pilgrims eating and praying together in crowded areas, who might then unknowingly bring it back to their own countries.

But Mecca's gates remained open throughout even more serious pandemics, such as the 1918 Spanish influenza, according to John Slight, a history professor at Open University U.K. and the author of a book about the British empire and the hajj.

The pilgrimage has long sparked public anxiety about pandemics, dating back to when the second caliph of Islam spotted a woman debilitated by a skin disease at the shrine in 632 and asked her to leave, said Muhammad Abdel-Haleem, director of the Center for Islamic Studies at the School of Oriental and African Studies in London.

Colonial authorities have occasionally barred people from traveling to Mecca and Medina over health concerns, such as fast-spreading cholera. Britain, for instance, imposed mass, controversial quarantines on Indian pilgrims' ships. But "the authorities of the shrines themselves never stopped travellers," said Faisal Devji, history professor at Oxford University.