Ukrainian President Volodymyr Zelenskyy called for “maximum” sanctions against Russia in a video address to world leaders and executives at the World Economic Forum in Davos, Switzerland. 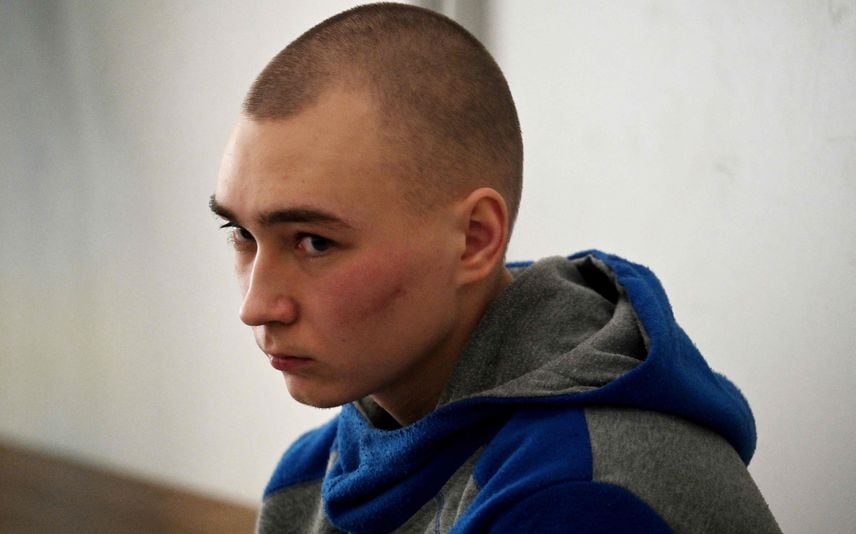 Kyiv: A captured Russian soldier who pleaded guilty to killing a Ukrainian civilian was sentenced Monday to life in prison — the maximum — in the first war crimes trial since Moscow invaded Ukraine three months ago.

Meanwhile, in a rare public expression of opposition to the war from the ranks of the Russian elite, a veteran Kremlin diplomat resigned and sent a scathing letter to foreign colleagues in which he said, “Never have I been so ashamed of my country as on Feb. 24 of this year.”

Ukrainian President Volodymyr Zelenskyy called for “maximum” sanctions against Russia in a video address to world leaders and executives at the World Economic Forum in Davos, Switzerland.

On the battlefield, heavy fighting raged in the Donbas in the east, where Moscow's forces have stepped up their bombardments. Cities not under Russian control were constantly shelled, and one Ukrainian military official said Russian forces targeted civilians trying to flee.

In the first in what could be multitudes of similar prosecutions, Russian Sgt. Vadim Shishimarin, 21, was sentenced for the killing of a a 62-year-old man who was shot in the head in a village in the northeastern Sumy region in the early days of the war. Shishimarin, a member of a tank unit, apologized to the man's widow in court.

His Ukraine-appointed defense attorney, Victor Ovsyanikov, argued his client had been unprepared for the “violent military confrontation” and mass casualties that Russian troops encountered when they invaded. He said he would appeal.

Ukrainian civil liberties advocate Volodymyr Yavorskyy said it was “an extremely harsh sentence for one murder during the war.” But Aarif Abraham, a British-based human rights lawyer, said the trial was conducted “with what appears to be full and fair due process," including access to an attorney

Ukrainian prosecutors are investigating thousands of potential war crimes. Russian forces in Mariupol bombed a theater where civilians were sheltering and struck a maternity hospital. In the wake of Moscow's withdrawal from around Kyiv weeks ago, mass graves were discovered and streets were strewn with bodies in towns such as Bucha.

Other, more difficult cases may need to go to the International Criminal Court at The Hague, in the Netherlands, said Abraham, who specializes in international criminal law at Garden Court North Chambers in Manchester.

Shishimarin had told the court that he at first disobeyed his immediate commanding officer's order to shoot the unarmed civilian but had no choice but to follow the order when it was repeated forcefully by another officer.

Abraham, however, noted that following a order is not a defense under the law.

Before the sentencing, Kremlin spokesman Dmitry Peskov said that Moscow was unable to defend the soldier “on the ground” but will consider trying to do so “through other channels.”

Russia and its allies have threatened to bring war crimes charges against Ukrainian soldiers, including the fighters who defended the steel plant in the ruined city of Mariupol before surrendering last week.

Russian authorities have repeatedly leveled vague accusations of war crimes against the fighters and have seized upon the far-right origins of one of the regiments there.

Family members of the fighters have pleaded for them to be given rights as prisoners of war and eventually returned to Ukraine. Russian Deputy Foreign Minister Andrei Rudenko said he is open to “any possibility that doesn't contradict common sense.”

Meanwhile, Boris Bondarev, a veteran Russian diplomat to the U.N. office at Geneva, resigned and sent a letter railing against the “aggressive war unleashed” by Russian President Vladimir Putin.

In a rare, if not unprecedented, case public criticism from Russia's diplomatic corps, Bondarev, 41, told The Associated Press: “It is intolerable what my government is doing now."

In his letter, Bondarev said those who conceived the war “want only one thing — to remain in power forever, live in pompous tasteless palaces, sail on yachts comparable in tonnage and cost to the entire Russian Navy, enjoying unlimited power and complete impunity.”

He also said Russia's Ministry of Foreign Affairs is all about "warmongering, lies and hatred.”

At the Davos forum, Zelenskyy said sanctions against the Kremlin need to go further. He urged an embargo on Russian oil, a complete cutoff of trade with Russia and a withdrawal of foreign companies from the country.

“This is what sanctions should be: They should be maximum, so that Russia and every other potential aggressor that wants to wage a brutal war against its neighbor would clearly know the immediate consequences of their actions,” said Zelenskyy, who received a standing ovation.

On the battlefield, Russian forces increased bombardments in the Donbas, the eastern industrial heartland of coal mines and factories that Russia is bent on capturing.

The chief of the Donetsk regional military administration, Pavlo Kyrylenko, said heavy fighting continued near the Luhansk region, with Russian forces “trying to break through and capture Lyman city so as to perform its offensive toward Sloviansk and Kramatorsk.” The Donbas consists of the Donetsk and Luhansk regions.

He said the Russian forces were decimating cities in their attempt to take them over. He said: “The main thing is to stop the enemy and then we can think about liberating the territories.”

He said that only about 320,000 people out of the region's prewar population of 1.6 million remain and that Russian forces continue to target evacuation efforts.

“We haven't been able to see the sun for three months. We are almost blind because we were in darkness for three months,” said Rayisa Rybalko, who hid with her family first in their basement and then in a bomb shelter at the local school before fleeing their village of Novomykhailivka. “The world should have seen that.”

Her son-in-law Dmytro Khaliapin said heavy artillery pounded the village. “Houses are being ruined,” he said. “It's a horror.” (AP)