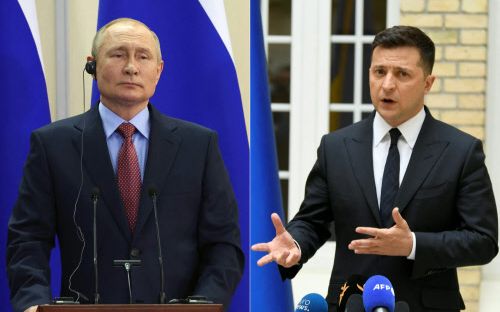 Kyiv: Russian and Ukrainian negotiators will resume face-to-face peace talks as soon as Monday, probing whether a near-stalemate in fighting has forced Moscow to temper its demands.

President Volodymyr Zelensky hailed the new negotiations, saying he hoped they would bring peace "without delay", and lamented a month-long Russian invasion that has already killed thousands and devastated numerous Ukrainian cities.

The new talks are set to start in Turkey on either Monday or Tuesday, with Zelensky desperate to halt the bombardment of cities like Mariupol, where officials said the situation is "catastrophic".

About 170,000 civilians remain trapped in Mariupol without adequate food, water or medicine, as the southern port city is being turned "into dust" by Russian shelling, according to Ukraine's foreign ministry.

France, Greece and Turkey are hoping to launch a "humanitarian operation" to evacuate civilians within days, according to French President Emmanuel Macron, who has sought an OK from Russian counterpart Vladimir Putin.

Several previous rounds of peace talks have failed to halt the fighting or overcome fundamental disagreements about Kyiv's alignment with the West and Russia's occupation of Ukrainian territory.

But with Russia's much-larger military humbled by fierce Ukrainian resistance and forced to abandon efforts to capture Kyiv, there is renewed hope for talks.

"Our goal is obvious -- peace and the restoration of normal life in our native state as soon as possible," Zelensky said in a late-night video message that also set out his negotiating red lines.

"Ukraine's sovereignty and territorial integrity are beyond doubt. Effective security guarantees for our state are mandatory," he said.

Zelensky has previously indicated he is "carefully" considering a Russian demand of Ukrainian "neutrality".

"This point of the negotiations is understandable to me and it is being discussed, it is being carefully studied," Zelensky said during an interview with several independent Russian news organisations.

Putin has avoided being precise about the goals of his invasion, stating only that he wanted to "demilitarise and denazify" but not occupy Ukraine.

Commentators hope that vagueness will now give him more room to accept an agreement, claim victory and end the war.

The UN estimates that at least 1,100 civilians have died and more than 10 million have been displaced in a devastating war that has gone on far longer than Moscow expected.

It remains to be seen whether talks will be hampered by US President Joe Biden's shock declaration that Putin "cannot remain in power".

The ad-libbed remark sparked outrage in Moscow and sowed widespread concern in Washington and abroad, seeming to undercut Biden's own efforts on a European visit to underscore a carefully crafted unity in support of Kyiv.

Asked by reporters Sunday if he had been calling for regime change, Biden responded: "No." German Chancellor Olaf Scholz also told media that was "not the objective of NATO, nor that of the US president."

Macron warned that any escalation "in words or action" could harm his efforts in talks with Putin to agree on evacuating civilians from the devastated port city of Mariupol.

Neither intense diplomacy nor steadily mounting sanctions have persuaded Putin to halt the war.

Many in Ukraine remain suspicious that Moscow could use the talks as an opportunity to regroup and fix serious tactical and logistical problems in the Russian military.

Ukrainian intelligence chief Kyrylo Budanov said Putin could still be aiming to divide the country in a Korea-like fashion -- to "impose a separation line between the occupied and unoccupied regions".

"After a failure to capture Kyiv and remove Ukraine's government, Putin is changing his main operational directions. These are south and east," he wrote on Facebook. "It will be an attempt to set up South and North Koreas in Ukraine."

Russia has de facto control over the southern region of Crimea and the self-proclaimed Donetsk and Lugansk republics in the country's eastern Donbas region.

The head of Ukraine's Lugansk separatist region has indicated it may hold a referendum on becoming part of Russia.

Resistance in besieged Mariupol is the main obstacle preventing Moscow from gaining unbroken control of land from the Donbas to the Crimea -- its residents have recounted harrowing scenes of destruction and death.

But it is clear Russia's original hopes of sweeping across Ukraine undeterred have faded.

Russian forces have made little progress in capturing key cities, prompting a shift to aerial bombardment of civilians.

With Western-supplied weapons, Ukraine's fighters continue to hold off -- or even push back -- the Russian army.

In the southern town of Mykolaiv, under heavy assault for weeks, the bombardments appeared to be easing.

That is a welcome respite for locals like young Sofia, who suffered head injuries during shelling in early March near Mykolaiv.

"Now I can move my arms and legs a little. I still can't get up without my mother's help, but hopefully I can leave soon," she told AFP.

The frontlines appeared to have receded from Mykolaiv, with a counteroffensive being mounted in Kherson, about 80 kilometres (50 miles) to the southeast.

Recent shelling killed two people in a village near Kherson, the only significant city the Russian army claims to have seized.

In Kherson itself, about 500 people took part in anti-Russian demonstrations on Sunday.

Kyrylo, a paramedic who spoke with AFP by telephone, said Russians dispersed the peaceful rally with tear gas and stun grenades.

The Ukrainian defence ministry said its forces had also recaptured Trostianets, a town near the Russian border.

It released images showing Ukrainian soldiers and civilians among heavily damaged buildings and what appeared to be abandoned Russian military equipment.

Hollywood A-listers noted the toll on civilians with a moment of silence at Sunday's Oscars gala in Los Angeles, urging support for "the people of Ukraine currently facing invasion, conflict and prejudice within their own borders".