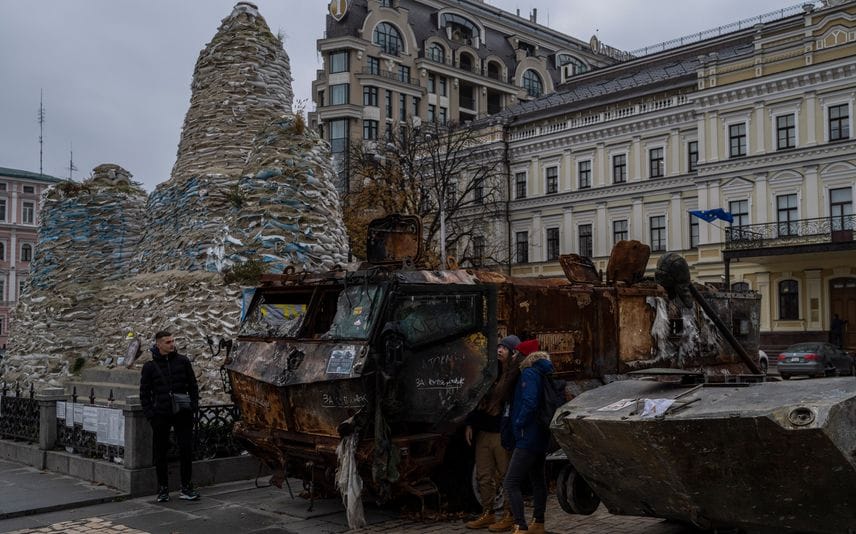 Kyiv: Russia's military said Wednesday it will withdraw from the only Ukrainian regional capital it captured, but Kyiv was skeptical and an analyst warned this could be a ruse to lure the country's forces into a deadly trap. A forced pullout from the city of Kherson would mark one of Russia’s worst setbacks in the 8-month-old war.

Ukrainian authorities cautioned against considering the announced plan to retreat from Kherson, a gateway to the Russian-occupied Crimean Peninsula, and nearby areas as a done deal. President Volodymyr Zelenskyy has warned that the Russians were feigning a pullout from Kherson to lure the Ukrainian army into an entrenched battle in the strategic industrial port city.

If confirmed, the withdrawal from Kherson — in a region of the same name that Moscow illegally annexed in September — would pile on another setback to Russia's early failed attempt to capture the capital, Kyiv, and the chaotic and hasty retreat from the administrative region around Ukraine’s second-largest city, Kharkiv, which itself never fell to the Russians. Russian forces captured Kherson early in the invasion, which began Feb. 24.

Kyiv's forces have zeroed in on the city, whose prewar population was 280,000, and cut off supply lines in recent weeks as part of a larger counteroffensive in eastern and southern Ukraine that has pushed Russian troops out of wide swaths of territory.

Recapturing Kherson could allow Ukraine to win back lost territory in the Zaporizhzhia region and other southern areas, including Crimea, which Russia illegally seized in 2014. A Russian retreat is almost certain to raise domestic pressure on the Kremlin to escalate the conflict.

Speaking in a stern tone and with a steely face on Russian TV, Moscow's top military commander in Ukraine pointed to a blurred map as he reported to Defense Minister Sergei Shoigu on Wednesday that it was impossible to supply the city of Kherson and that its defense would be “futile.”

Gen. Sergei Surovikin said that 115,000 people had been relocated because their “lives are constantly in danger” and proposed a military retreat “in the near future” to the opposite bank of the Dnieper River from where Kherson lies.

Shoigu agreed with Surovikin’s assessment and ordered him to “start with the withdrawal of troops and take all measures to ensure the safe transfer of personnel, weapons and equipment across the Dnieper River.”

But Ukrainian presidential adviser Mykhailo Podolyak told The Associated Press: “So far, we do not see any signs that Russia is completely leaving the city, which means that these statements may be disinformation.”

Yaroslav Yanushevych, Kherson’s Ukrainian-appointed governor, called on residents “not to give in to euphoria” just yet. Another Ukrainian-appointed Kherson regional official, Serhii Khlan, told reporters that Russian forces had blown up five bridges to slow Kyiv’s forces.

Military analyst Oleg Zhdanov told the AP Russia’s announced retreat “could very well be an ambush and a Russian trap to force the Ukrainians to go on the offensive, force them to penetrate the Russian defenses, and in response to strike with a powerful blow from the flanks.”

After a day of his aides' observations about the announced retreat and a meeting he held with his senior military staff in Kyiv, Zelenskyy didn't directly comment, saying in his nightly video address, “Our emotions must be restrained — always during war. I will definitely not feed the enemy all the details of our operations. ,.. When we have our result, everyone will see it.”

In addition to the largely successful counteroffensive, Ukrainian resistance fighters behind the front line have worked inside Kherson, with sabotage and assassinations of Moscow-appointed officials.

With no indication of foul play but against that backdrop, reports surfaced Wednesday that the No. 2 official of the Moscow-installed Kherson regional government was killed in a car crash. The death of Kirill Stremousov — a prominent regional official who posted public updates about the war almost daily — was confirmed by his boss, Vladimir Saldo.

The Russian Defense Ministry said months ago that Saldo himself had been poisoned and hospitalized.

Speaking at a White House news conference, U.S. President Joe Biden said American officials had been expecting the Russian announcement. “It’s evidence of the fact that they have some real problems — the Russian military,” he said.

Asked if a pullout might signal to Kyiv that it now had leverage to begin peace talks with Moscow, Biden said it would “at a minimum lead to time for everyone to recalibrate their positions over the winter period.”

The Russian military appeared to have been preparing for an orderly pullout from Kherson — or an ambush — for months, contrasting with the haphazard retreat from the Kharkiv region when the invading force left behind a large amount of weapons and ammunition.

In October, Surovikin appeared to set the stage for a withdrawal from Kherson, acknowledging the situation was “quite difficult." Evacuations of civilians followed, as did symbolic moves, such as relocation of the remains of Grigory Potemkin, the Russian general who founded Kherson in the 18th century.

In recent months, Ukraine used U.S.-supplied HIMARS rocket launchers to hit a key bridge on the Dnieper in Kherson and a large dam upstream that is also used as a crossing point. The strikes forced Russia to rely on pontoons and ferries that Ukraine also targeted.

The attacks disrupted supply links to Kherson and made Russian forces on the Dnieper's west bank vulnerable to encirclement. The shortages were exacerbated after an Oct. 8 truck bomb blew up part of the strategic Kerch Bridge linking Russia’s mainland to Crimea, which has served as a major supply hub for Russian forces.

Russia wanted to hold onto Kherson and other positions west of the Dnieper so it could press an offensive to other areas and sever Ukraine’s access to the Black Sea. That would damage Ukraine’s economy and enable Moscow to build a land corridor to the separatist Transnistria region of Moldova, home to a major Russian military base.

The loss of Kherson could have painful consequences for Russian President Vladimir Putin: more criticism of Russia’s military command from hawks, a decline in troop morale, and stronger opposition to his troop mobilization. Abroad, China and India could see the loss as a sign of the Kremlin’s weakness just when it needs their support to soften the blow of crippling Western sanctions.

Other Kremlin setbacks have included a chaotic and mistake-ridden troop mobilization, poor training and a shortage of weapons, clothing and other supplies for troops, increase in international sanctions, and intensified Western advanced weapons supplies to Kyiv.

Fresh signs of Ukraine's advance toward Kherson emerged Wednesday. Zhdanov, the analyst, said Ukrainians captured the city of Snihurivka, 50 kilometers (30 miles) north of Kherson, opening a direct road to a Dnieper River crossing and Kherson's suburbs. The Ukrainian Pravda news outlet cited Ukrainian armed forces intelligence as claiming that two other settlements in the Kherson region, Pravdyne and Kalynivske, had been captured,

None of the reports could be independently confirmed.

Nationwide, at least nine civilians were killed and 24 wounded in 24 hours, the Ukrainian president's office said. It accused Russia of using explosive drones, rockets, heavy artillery and aircraft to attack eight regions in the southeast.