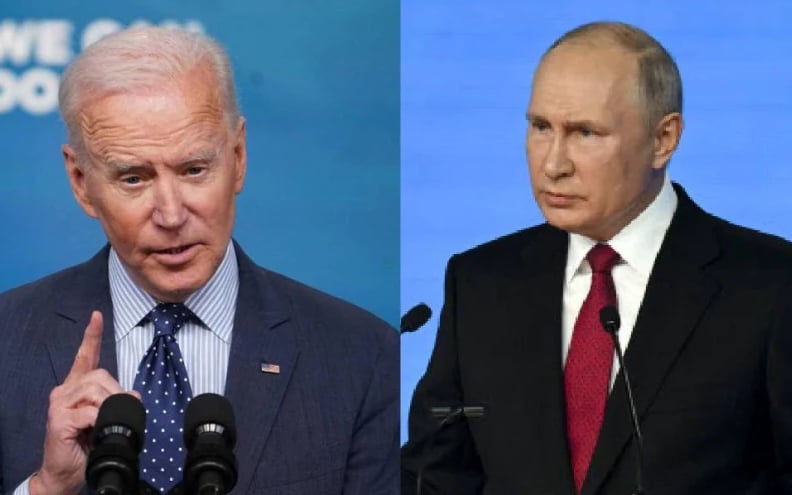 Zaporizhzhia, Ukraine: Russian President Vladimir Putin on Thursday claimed the "liberation" of the flattened city of Mariupol after nearly two months of fighting, demanding that its trapped Ukrainian defenders be sealed up in their underground last stand.

The fate of the besieged port has become totemic as Russia battles to complete a land bridge covering territories of Ukraine already under its control, including Crimea, which would deprive Ukraine of its industrial heartland and most of its coastline.

President Joe Biden, however, said Putin was doomed to failure in Ukraine, as he announced $800 million in extra US military aid including howitzers and tactical drones.

"Our unity at home with our allies and partners, and our unity with the Ukrainian people, is sending an unmistakable message to Putin -- he will never succeed in dominating and occupying all of Ukraine," he said.

Ukraine appealed for an immediate humanitarian corridor to allow civilians and wounded fighters to be evacuated from Mariupol's sprawling Azovstal steel plant.

A flow of Western military aid has helped force Russia to deflect its offensive to eastern Ukraine and accentuated the devastating pressure on places like Mariupol on the shores of the Sea of Azov.

"Mariupol has been liberated," Russian Defence Minister Sergei Shoigu told Putin during a televised meeting. "The remaining nationalist formations took refuge in the industrial zone of the Azovstal plant."

Shoigu said around 2,000 Ukrainian soldiers remained inside the site, where the last pocket of resistance has been sheltering in a network of underground tunnels.

Thousands of civilians are believed to have died in the city, and up to 2,000 others are also sheltering in the plant without access to drinking water or food, according to Ukrainian authorities.

Putin said the "liberation" of Mariupol was a "success" for Russian forces but ordered Shoigu to call off the planned storming of the industrial area, dismissing it as "impractical".

"There is no need to climb into these catacombs and crawl underground through these industrial facilities. Block off this industrial area so that not even a fly can escape," Putin said.

He said Russia had diverted forces further north to reinforce the fight for all of Lugansk and Donetsk, two regions of Ukraine controlled by pro-Moscow separatists.

The West staged another show of support for Zelensky with a visit to Kyiv by the Spanish and Danish prime ministers, a day after European Council leader Charles Michel came and vowed the EU would do "everything possible" to help Ukraine win the war.

Germany, under fire for not giving more to Zelensky's government, said it had reached an agreement with eastern European partners to indirectly supply Ukraine with a new batch of heavy weapons.

"It's about tanks, armoured vehicles, or other options individual countries are able to give," Defence Minister Christine Lambrecht said, explaining that Germany would then replenish those countries' stocks.

The deliveries would happen "in the next few days", she said, because "military experts agree that the next two weeks will be decisive in Ukraine's fight against Russia".

In all, according to new United Nations figures, at least 2,345 Ukrainian civilians have been killed since Russia invaded on February 24.

In morgues around the capital, the bodies of some 1,020 civilians are being stored after Russian troops withdrew from the region, Deputy Prime Minister Olga Stefanishyna told AFP.

The bodies of nine civilians, some showing signs of torture, have been found in the town of Borodyanka outside Kyiv, Ukrainian police said.

"We will not leave the Ukrainian people alone," he said, announcing 200 tonnes of Spanish military supplies.

At a morgue in Bucha near Kyiv, families carefully searched body bags and examined corpses, looking for missing loved ones.

Four hundred bodies have been discovered there since the Russians withdrew on March 31, local police chief Vitaly Lobas told AFP. Around a quarter of them are still unidentified.

But for all its military aid and outrage at alleged war crimes in Ukraine, the West remains nervous about igniting a direct conflict with nuclear-armed Russia.

The Pentagon had said Ukraine was receiving fighter planes to bolster its air force -- but it later said only aircraft parts had been delivered.

The US Treasury said it was extending a $500 million infusion of aid to help Ukraine's government pay salaries and pensions, and provide essential services.

At a meeting of G20 finance ministers in Washington, US Treasury Secretary Janet Yellen led a walkout of Western allies as Russian officials spoke.

In London, organisers of the Wimbledon tennis tournament banned Russian and Belarusian players from the 2022 event in response to the invasion.

And a June meeting of the UN cultural agency's World Heritage Committee scheduled to take place in the Russian city of Kazan has been postponed indefinitely, a senior UNESCO source told AFP.

More than 7.7 million people are estimated to have been internally displaced inside Ukraine, having fled their homes but stayed within the country, the UN said.

More than five million Ukrainians have fled to other countries, it said, in Europe's worst refugee crisis since World War II.

But returns have also accelerated in recent weeks, reaching over one million, according to a spokesman for Kyiv's border force.

Those returning must often take huge risks. Olena Klymenko said Ukrainian soldiers had been de-mining her pummelled village of Moshchun.

"We found a booby trap in our garden. It seems it was disarmed. We don't know," said Klymenko, whose home was destroyed. "Still, we need to look for our stuff."

Obama to Democrats: 'Sulking and moping is not an option'

'Our hearts are with India', Biden on Morbi bridge collapse