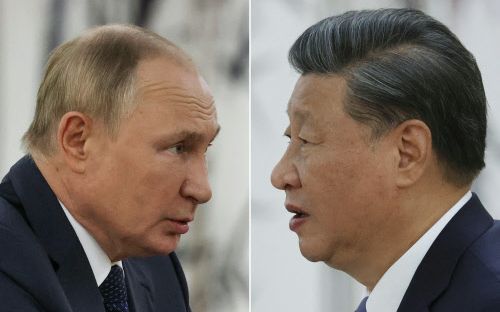 This combination of pictures created on September 15, 2022 shows Russian President Vladimir Putin and China's President Xi Jinping during their meeting on the sidelines of the Shanghai Cooperation Organisation (SCO) leaders' summit in Samarkand | Photo: AFP

Samarkand, Uzbekistan: Russian President Vladimir Putin and Chinese leader Xi Jinping met for their first face-to-face talks since the start of the conflict in Ukraine on Thursday, hailing their strategic ties in defiance of the West.

Sitting across from each other at two long rounded tables and flanked by aides, the two leaders met on the sidelines of a summit of the Shanghai Cooperation Organisation (SCO) in ex-Soviet Uzbekistan.

The meeting was part of Xi's first trip abroad since the early days of the pandemic and for Putin a chance to show Russia has not been fully isolated despite Western efforts.

"China is willing to make efforts with Russia to assume the role of great powers, and play a guiding role to inject stability and positive energy into a world rocked by social turmoil," Xi told Putin at the talks.

Putin took a clear broadside at the United States, which has been leading efforts to support Ukraine and impose sanctions on Russia.

"Attempts to create a unipolar world have recently acquired an absolutely ugly form and are completely unacceptable," Putin said.

"We highly appreciate the balanced position of our Chinese friends in connection with the Ukrainian crisis," Putin told Xi, while reiterating Moscow's backing for China on Taiwan.

"We adhere to the principle of one China. We condemn the provocation of the US and their satellites in the Taiwan Strait," Putin said, after a US Senate committee on Wednesday took the first step towards Washington directly providing billions of dollars in military aid to Taiwan.

It was the first in-person meeting between the two leaders since Putin saw Xi in early February for the Winter Olympic Games, days before the Russian leader launched the military offensive in Ukraine.

The Kremlin has touted the SCO summit in the ancient Silk Road city of Samarkand as showing there is an "alternative" to Western dominated international institutions.

The SCO -- made up of China, India, Pakistan, Russia and the ex-Soviet Central Asian nations of Kazakhstan, Kyrgyzstan, Tajikistan and Uzbekistan -- was set up in 2001 as a political, economic and security organisation to rival Western institutions.

The leaders of those countries were to attend, as well as Iranian President Ebrahim Raisi and Turkish President Recep Tayyip Erdogan.

Putin met with the leaders of Kyrgyzstan and Turkmenistan earlier Thursday, as well as with Raisi and Pakistani Prime Minister Shehbaz Sharif.

With both Raisi and Sharif he said ties were "developing positively", while the Iranian leader told Putin that US-backed sanctions on both countries would only make their relationship "stronger".

"The Americans think whichever country they impose sanctions on, it will be stopped, their perception is a wrong one," Raisi said.

For Putin the summit comes at an important time, as his forces face major battlefield setbacks in Ukraine and amid a continued Western push to make Russia an international pariah.

For Xi, it is an opportunity to shore up his credentials as a global statesman ahead of a pivotal congress of the ruling Communist Party in October.

Formerly Cold War allies with a tempestuous relationship, China and Russia have drawn closer in recent years as part of what they call a "no-limits" relationship acting as a counterweight to the global dominance of the United States.

The defence ministry in Moscow said Thursday that Russian and Chinese warships were on a joint patrol in the Pacific and planning a live-fire artillery exercise at sea.

The main day of the SCO summit will be on Friday, with sessions involving all the attending leaders.

It was not clear who else Xi might meet, although talks with Modi would be their first since 2019. China-India relations turned frosty over deadly fighting in 2020 on their disputed Himalayan border.

Security was tight in Samarkand, a city of grand tiled mosques that was one of the hubs of Silk Road trade routes between China and Europe, with a huge police presence on the streets and armoured vehicles parked downtown.

Still, residents told AFP of their joy at hosting the meeting, pointing to the city's long history as an international crossroads.

"We are proud that so many leaders of various countries are gathering in our city. Samarkand from ancient times was a legendary city," said 26-year-old Shakhboz Kombarov.