Powerful quake of 6.8-magnitude kills over 30 in China, leaves trail of destruction 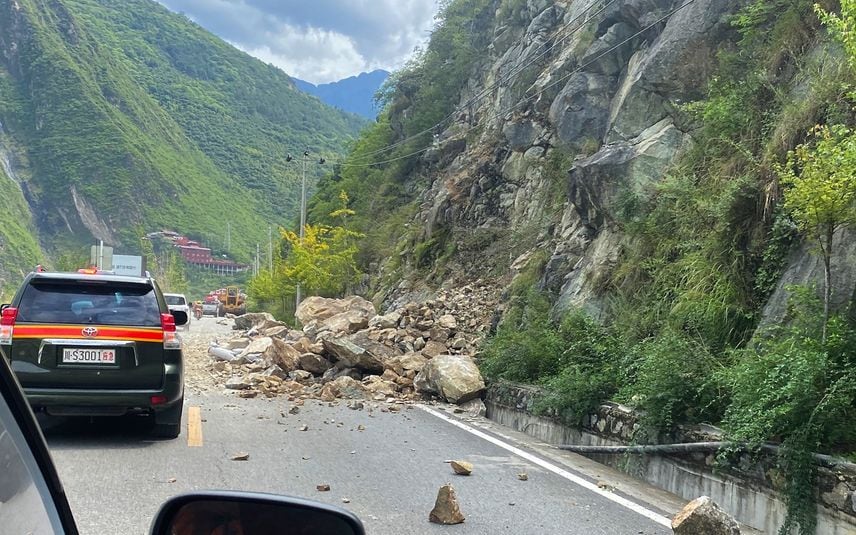 Fallen rocks are seen on road heading to Luding county, the epicentre of a quake in southwest China's Sichuan Province. Photo:AP

Beijing/Chengdu: Over 30 people were killed and several others injured on Monday when a powerful earthquake of 6.8-magnitude jolted Luding County in China's southwest Sichuan province, whose population is already reeling under a rising number of COVID-19 cases and an unprecedented drought.

The epicentre of the quake, which occurred at 12:25 pm local time, was monitored at 29.59 degrees north latitude and 102.08 degrees east longitude at a depth of 16-km, China Earthquake Networks Centre was quoted as saying by the state-run Xinhua news agency.

The epicentre is 39-km away from the county seat of Luding and there are several villages within the 5-km range around the epicentre.

Official media reports quoted local officials as saying that more than 30 people were killed and over 30 others injured. Casualties were expected to go up as rescue teams fanned out into the affected areas.

Most people of the over 21-million strong population of Chengdu spent most part of the day outside their homes as aftershocks continued to shake the area.

"Heartfelt condolences to lives lost in the devastating earthquake in Sichuan on September 5 and prayers for the early recovery of the injured," the Indian Embassy here tweeted.

Chinese President Xi Jinping has ordered all-out rescue efforts to minimize casualties stressing that saving lives should be taken as the primary task.

While calling for utmost efforts to ensure the safety of people's lives and property, Xi asked the Ministry of Emergency Management and other departments to send teams to Sichuan to guide the relief work and ordered the People's Liberation Army and the People's Armed Police Force to actively assist local disaster relief efforts.

The Red Cross Society of China initiated a Level-III emergency response following the earthquake, with the first batch of relief materials consisting of 320 tents, 2,200 relief packages, 1,200 quilts and 300 folding beds dispatched to the affected area.

The society has also sent a working group there to help with the relief and rescue work.

Sichuan province has activated the second-highest level of emergency response for the earthquake and more rescue forces are rushing to the epicentre area.

The tremor was felt in Chengdu, the capital of Sichuan, which is 226-km away from the epicentre. Photos and videos posted on Chinese social media showed buildings shaking in Chengdu. Details of the damage are awaited.

Sichuan province is located adjacent to Tibet. The Tibetan plateau is known to be prone to heavy earthquakes as it sits right over the place where the tectonic Eurasian and Indian plates meet, often colliding with huge force.

Monday's quake struck as the province is grappling with the rising number of COVID-19 cases.

Chengdu was under a snap lockdown due to a growing number of cases. Residents were told to stay home, with one person per household allowed out each day to buy necessities. Daily nucleic acid tests were also mandated until Wednesday, the Hong Kong-based South China Morning Post reported.

More than 1,000 cases have been reported since mid-August in Chengdu alone, a southwestern transport hub of 21 million people. Sichuan reported 105 new symptomatic cases on Monday and another 80 asymptomatic infections.

The province is also reeling under unprecedented drought and heatwaves persisted over vast swathes of China, with farmlands left dry after a month of no rainfall and little to no irrigation equipment available to farmers. PTI

Putting every ounce of its energy to eliminate visa wait times in India, ...