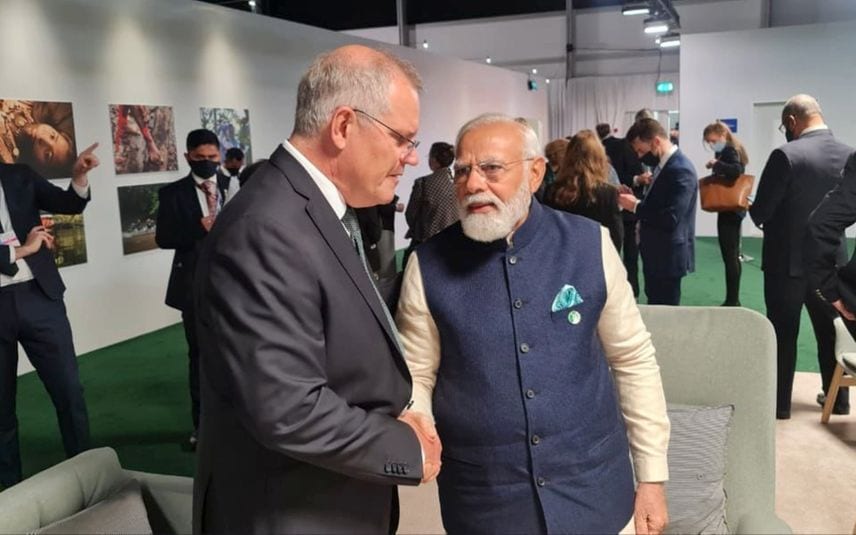 In a series of photos tweeted by Prime Minister Modi, he is seen meeting Australian Prime Minister Scott Morrison, German Chancellor Angela Merkel and other leaders.

"From Rome to Glasgow, the interactions with Chancellor Merkel continue," Modi tweeted.

The two leaders held bilateral talks on the sidelines of the G20 summit in Rome on Sunday.

Prime Minister Modi, who earlier in the day thanked his Australian counterpart Morrison for the recognition of Covaxin, also met him on the sidelines of the COP26 Climate Summit.

"Never a dull moment when you are meeting the one and only @ScottMorrisonMP,” he tweeted.

In a picture, Modi is seen talking with Sri Lankan President Rajapaksa. The two leaders are seen happy to be in each other's company. "Happy to have met you here in Glasgow, President @GotabayaR,” Modi tweeted.

Modi also met his Nepalese counterpart. "Met PM @SherBDeuba in Glasgow. It is important we keep working together for sustainable development. He rightly highlighted the threat of climate change to the Himalayan region,” Modi tweeted.

He also met with Charles, the Prince of Wales. “His passion towards caring for the environment is outstanding. He is at the forefront of many efforts to further sustainable development. Had a great meeting with him in Glasgow,” Modi tweeted.