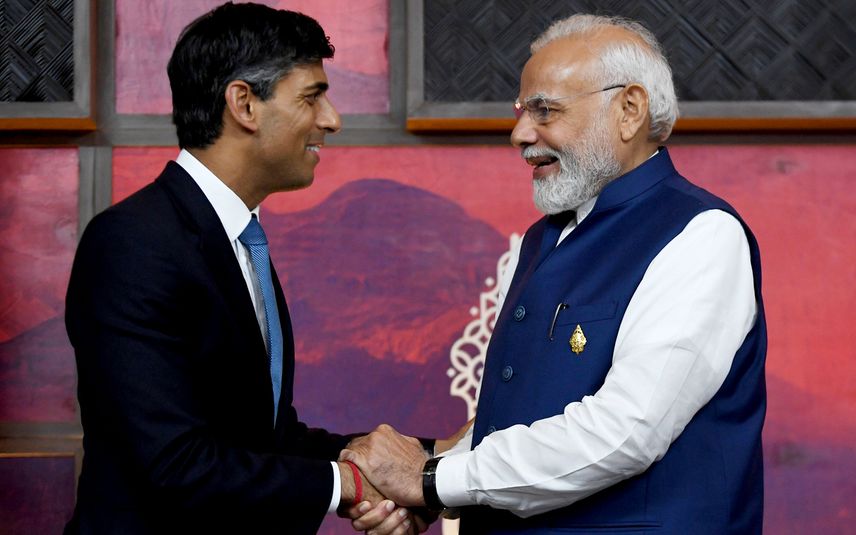 Prime Minister Narendra Modi in a bilateral meeting with the Prime Minister of the United Kingdom Rishi Sunak at G20 summit, in Bali on Wednesday | Photo: ANI

Bali: The UK on Wednesday unveiled a new scheme offering 3,000 places annually to 18 to 30 year-old degree-educated Indian nationals to come to Britain to live and work for up to two years following the first meeting between Prime Minister Narendra Modi and his British counterpart Rishi Sunak on the sidelines of the G-20 summit here.

The British PM's office said the leaders agreed on the "enduring importance" of the UK-India relationship, and of the "living bridge" between our countries and that Sunak passed on his thanks to Modi for the "overwhelming" response of the Indian people to his appointment as the prime minister.

After his talks with Sunak, Modi said India attaches great importance to the robust India-UK ties while the Ministry of External Affairs said the discussions touched upon important sectors of collaboration such as trade, mobility, defence and security.

It said Modi and Sunak looked forward to the agreement of a UK-India free trade deal, which has the potential to unlock investment and increase jobs in both our countries, as well as expanding our deep cultural links.

The British PM's office said Sunak welcomed the opportunity to work together on challenges like ending the war in Ukraine and tackling climate change under India's presidency of the G20 next year.

It was the first meeting between the two leaders after the Indian-origin leader assumed office as the British prime minister around three weeks back.

A British readout said under the new 'UK-India Young Professionals Scheme, the UK will offer 3,000 places annually to 18–30 year-old degree educated Indian nationals to come to the UK to live and work here for up to two years.

It said the scheme will be reciprocal and that it is a "significant moment" both for the UK's bilateral relationship with India and its wider commitment to forging stronger links with the Indo-Pacific region.

"The Indo-Pacific is increasingly crucial for our security and our prosperity. It is teeming with dynamic and fast-growing economies, and the next decade will be defined by what happens in this region," Sunak said, according to the readout.

The British prime minister asserted that the UK will be a firm friend to the Indo-Pacific region.

"I know first-hand the incredible value of the deep cultural and historic ties we have with India. I am pleased that even more of India's brightest young people will now have the opportunity to experience all that life in the UK has to offer -- and vice-versa -- making our economies and societies richer," he added.

Referring to the proposed trade deal, London said, if agreed, it will be the first deal of its kind India has made with a European country.

"The trade deal would build on the UK-India trading relationship, already worth 24 billion pound, and allow the UK to seize the opportunities presented by India's growing economy," the British statement said.

It is learnt that the proposed free trade agreement figured in the talks.

"In parallel to the mobility partnership with India, we are also strengthening our ability to remove immigration offenders," it added.

The Ministry of External Affairs (MEA) said the two leaders expressed satisfaction at the state of the wide-ranging India-UK Comprehensive Strategic Partnership and progress on the 'Roadmap 2030' for future relations.

"The two leaders appreciated the importance of working together in bilateral and multilateral forums including G20 and the Commonwealth," it said.

"Discussions touched upon important sectors of collaboration such as trade, mobility, defence and security," the MEA added.

The India-UK relationship was elevated to a Comprehensive Strategic Partnership during the India-UK virtual summit held between Modi and his then British counterpart Boris Johnson in May last year.

At the summit, the two sides adopted a 10-year roadmap to expand ties in the key areas of trade and economy, defence and security, climate change and people-to-people connections among others.

The British readout also mentioned challenges posed by China, saying they are "systemic" and "long-term".

"China is a country with fundamentally different values to ours, with an authoritarian leadership intent on reshaping the international order," it said.