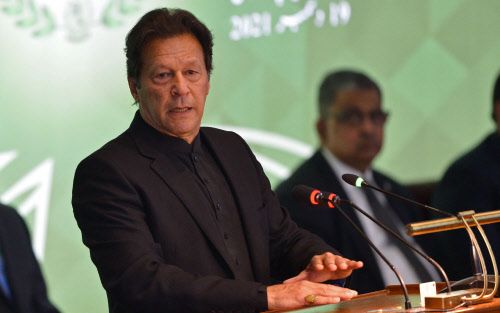 Islamabad: The Supreme Court of Pakistan adjourned Monday without ruling on the dissolution of parliament that has led to the ongoing political and constitutional crisis in the country.

A five-member bench resumed hearing on the case filed a day earlier when the Pakistani lawmakers were prevented from voting on the no-trust motion.

Pakistan Chief Justice Umar Ata Bandial said that even if the speaker of the National Assembly cites Article 5 of the Constitution, the no-confidence motion cannot be rejected.

"Does the speaker not have any option to reject the no-trust motion? Are you saying that the speaker dishonestly rejected the no-confidence motion?" Bandial was quoted as saying by The News International newspaper.

Pakistan Justice Chief made the remarks while hearing the suo moto case related to the prevailing crisis in the country.

"The speaker cannot reject the no-confidence motion even if he refers to Article 5 of the constitution," he said.

Justice Bandial further added that his fellow judges had expressed concern over the constitutional crisis the country was facing.

On Sunday, Pakistani President Arif Alvi dissolved the Pakistani parliament following Khan's advice. Imran Khan made the proposal minutes after parliament's deputy speaker rejected a motion of no confidence in him as "unconstitutional."

The decision to cancel the no-confidence vote angered opposition parties, who said they would appeal the decision in court. Pakistani Information Minister Fawad Hussain had said a snap parliamentary election will be held within 90 days.

Pakistan media has criticised the dissolution of the National Assembly in the country, saying that whatever happened on Sunday violated all rules governing proceedings in the House, particularly those dealing with the motion of no-confidence.

In an editorial published on Monday, the Dawn newspaper said that Imran Khan could have played the political game like a true sportsperson and still emerged stronger from the loss given the sharp narrative he had spun leading up to the vote. ANI