More than a million people have been ill with what Pyongyang refers to as "fever", state media said, despite leader Kim ordering nationwide lockdowns in a bid to slow the spread of disease through the unvaccinated population. 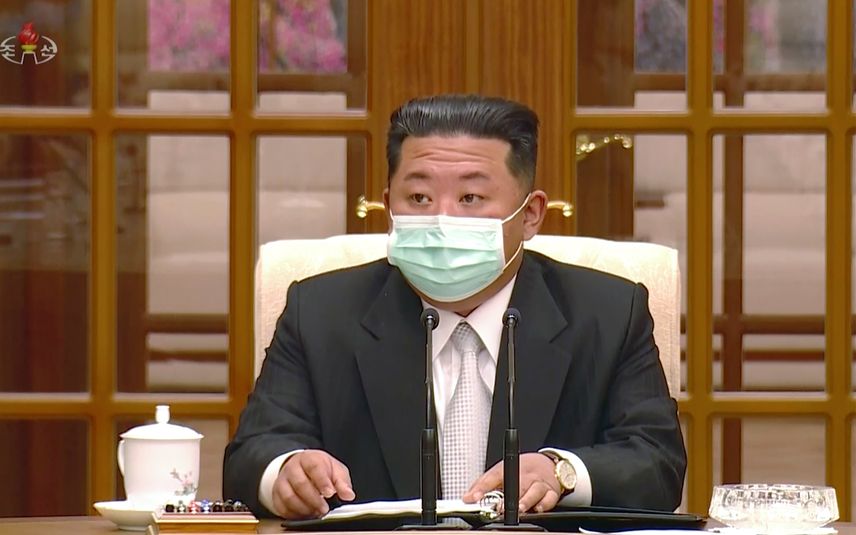 More than a million people have been ill with what Pyongyang refers to as "fever", state media said, despite leader Kim ordering nationwide lockdowns in a bid to slow the spread of disease through the unvaccinated population.

In a sign of how serious the situation may be, Kim "strongly criticised" healthcare officials for what he called a botched response to epidemic prevention -- specifically a failure to keep pharmacies open 24/7 to distribute medicine.

He ordered the army to get to work "on immediately stabilising the supply of medicines in Pyongyang", the capital, where Omicron was detected last week in North Korea's first reported cases of Covid-19.

Kim has put himself front and centre of North Korea's disease response, overseeing near-daily emergency Politburo meetings on the outbreak, which he has said is causing "great upheaval" in the country.

The failure to distribute medicine properly was "because officials of the Cabinet and public health sector in charge of the supply have not rolled up their sleeves, not properly recognising the present crisis", state media KCNA reported Kim as saying.

He also criticised lapses in official legal oversight, flagging "several negative phenomena in the nationwide handling and sale of medicines".

"While visiting a pharmacy, Kim Jong Un saw with his eyes the shortage of medicines in North Korea," Cheong Seong-jang, researcher at the Sejong Institute told AFP.

"He may have guessed but the situation may have been more serious than he had expected."

KCNA said that as of May 15, a total of 50 people had died, with 1,213,550 cases of "fever" and over half a million currently receiving medical treatment.

North Korea had maintained a rigid blockade since the pandemic began, but with massive Omicron outbreaks in neighbouring countries, experts said it was inevitable Covid would sneak in.

Kim's public criticism is a sign that the situation on the ground is grim, said Yang Moo-jin, professor at the University of North Korean Studies in Seoul.

"He is pointing out the overall inadequacy of the quarantine system," he said.

North Korea is likely to need international assistance to get through the massive Omicron surge, Yang said, and will turn to China first -- but maybe the United States or South Korea if it gets desperate.

South Korea's new President Yoon Suk-yeol said Monday that he would "not hold back on providing necessary assistance to the North Korean people".

"If the North Korean authorities accept, we will not spare any necessary support such as medicine -- including Covid-19 vaccines, medical supplies and healthcare personnel," he told South Korea's National Assembly.

Pyongyang has not responded to Seoul's most recent official communication detailing the Covid aid offer, the unification ministry said.

The decision on whether to accept help may depend more on Kim's nuclear testing plans than the medical situation, said the Sejong Institute's Cheong.

The World Health Organization said on Monday it was concerned about the situation and willing to provide both technical support and medical supplies.

"With the country yet to initiate Covid-19 vaccination, there is risk that the virus may spread rapidly among the masses unless curtailed with immediate and appropriate measures," regional WHO director Poonam Khetrapal Singh said in a statement.

The United States and South Korea have warned that Kim is preparing to conduct another nuclear test -- the regime's seventh.

"Receiving help from South Korea will hurt its ego," Cheong told AFP. "If Kim Jong Un is determined to conduct a test, he will not accept South Korea's help."

Analysts have warned Kim could speed up testing plans to distract the population from the coronavirus outbreak.

US President Joe Biden is set to visit Seoul later this week, with discussions of Pyongyang's weapons programs and Covid-19 outbreak likely to top the agenda.