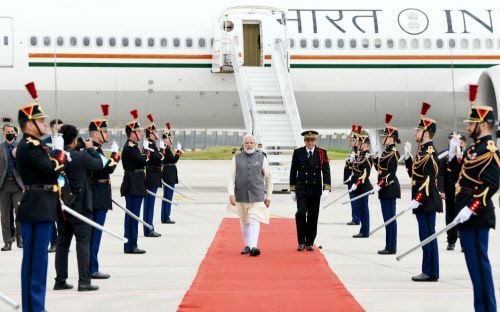 Prime Minister Narendra Modi arrives in Paris on the third and final leg of his visit to three European nations, on Wednesday | Photo: ANI/Arindam Bagchi Twitter)

Paris: Prime Minister Narendra Modi arrived here on Wednesday on the final leg of his three-nation European tour during which he would meet French President Emmanuel Macron and discuss issues of bilateral and mutual interests.

“Landed in Paris. France is one of India's strongest partners, with our nations cooperating in diverse areas,” Modi said on Twitter.

“Congratulations to my friend @EmmanuelMacron on being re-elected. I look forward to continue working together to deepen the India-French Strategic Partnership," Modi had tweeted.

The meeting between the two leaders will set a more ambitious agenda for the strategic partnership, Bagchi said in a tweet.

His visit comes during the French presidency of the European Union. It also coincides with the 75 years of diplomatic relations between India and France.

President Macron visited India in March 2018. Both leaders also met on the sidelines of the G20 Rome Summit in October 2021, G20 Osaka Summit in June 2019 and G20 Buenos Aires Summit in December 2018.

India and France, which are strategic partners since 1998, have a multifaceted partnership across the spectrum in defence, civil nuclear, economy, space and maritime security, clean energy and environment, counter-terrorism, people-to-people ties.

India and France are founding members of the International Solar Alliance announced by Prime Minister Modi at UN Climate Change COP21 in November 2015.

Both the countries enjoy a robust economic partnership with a bilateral trade of USD 7.86 billion (2020-21) and cumulative Foreign Direct Investment (FDI) of USD 9.83 billion since April 2000.

Over a thousand French businesses are present in India across sectors like defence, IT, consulting, engineering services and heavy industries. Over 150 Indian companies in France employ more than 7,000 people.

A thriving Indian diaspora in France deepens the cultural connect between both countries.

In a statement before leaving for Europe, Modi had said: "President Macron has very recently been re-elected, and my visit just ten days after the result will not only allow me to convey my personal congratulations in-person, but also reaffirm the close friendship between the two countries. This will also give us the opportunity to set the tone of the next phase of the India-France Strategic Partnership."

"President Macron and I will share assessments on various regional and global issues and will take stock of ongoing bilateral cooperation. It is my firm belief that two countries that share such similar vision and values for the global order, must work in close cooperation with each other," he had said.

Modi, who arrived here from Copenhagen, held “productive talks” with his Danish counterpart Mette Frederiksen on Tuesday and also attended a business summit to discuss economic linkages. He also addressed the Indian community and interacted with Denmark's Royal Family.

On the sidelines of the summit, Prime Minister Modi held separate bilateral meetings with his counterparts from Norway, Sweden, Iceland and Finland during which he discussed with them ways to further deepen bilateral ties and also exchanged views on regional and global developments. PTI