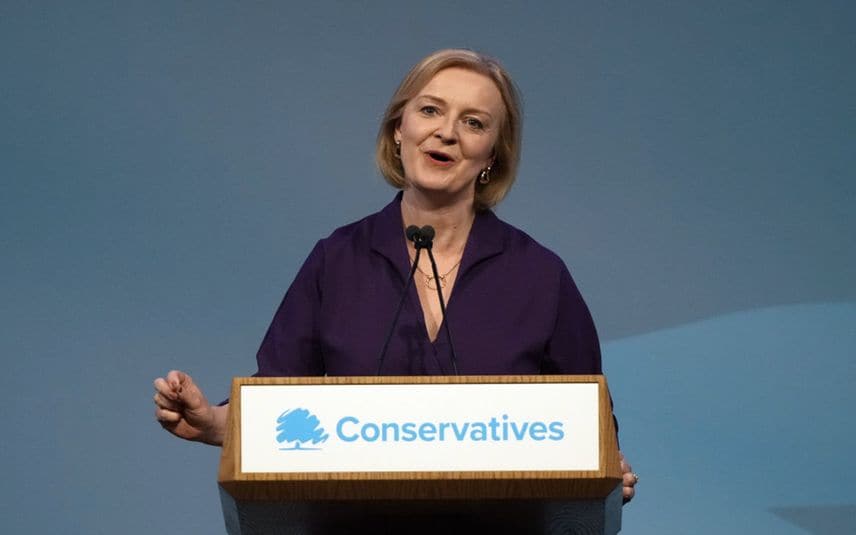 LONDON: Liz Truss became prime minister on a promise to open a new era of growth by shaking up Britain's economy. But the tumult that resulted was not exactly what she had in mind: Markets recoiled, the pound currency dived, her party revolted — and, in the end, she announced her resignation just 45 days after taking office.

Truss, 47, was forced to quit after an ill-conceived economic stimulus plan she drew up caused economic and political chaos and wiped out her support in the Conservative Party.

Truss, a libertarian who fervently believes in small government and free-market economics, came to office on Sept. 6 after 172,000 Conservative Party members voted in an internal leadership contest to pick a successor to the scandal-plagued Boris Johnson.

Truss was in many ways the opposite of the populist, people-pleasing Johnson. Serious and stiff as a public speaker, she called herself a “disruptor," ready to upend existing economic “orthodoxy.” On the campaign trail, Truss, who was then foreign secretary, vowed to slash taxes and red tape “from day one,” boost investment and turn Britain’s faltering economy around.

Her views appealed to many Conservatives, who backed her with a 57% majority over rival Rishi Sunak, a former Treasury chief who warned against radical tax cuts. Many saw in her echoes of former Prime Minister Margaret Thatcher, whom Truss admired — and sometimes emulated in her style of dress and poses on Instagram.

In the first days of her premiership, she gave a taste of things to come when she said she wasn’t afraid to make “unpopular” decisions — such as removing a cap on bonuses for bankers — to boost the U.K.’s competitiveness.

On Sept. 23, Treasury chief Kwasi Kwarteng unveiled the Truss government's vision for growth: a huge package of tax cuts worth 45 billion pounds ($50 billion) that the government said would create jobs and improve living standards. But the so-called mini budget didn’t explain how the government planned to pay for the tax cuts, leading investors to worry that public borrowing would balloon out of control.

The market's verdict was immediate and devastating.

The pound plunged to a record low against the U.S. dollar, the cost of government borrowing soared, and the Bank of England was forced to step in to buy government bonds to avert a wider financial crisis.

Many also questioned Truss' political judgment in slashing taxes for Britain's top earners while millions of people struggled to make ends meet with the cost of everything from heating to groceries soaring.

Truss stuck to her guns — for a while.

Two weeks after her package was unveiled, she insisted that she was determined to deliver her priorities: “Growth, growth and growth.” But party members were incensed about the damage she had done to their credibility.

By Oct. 14, she had fired Kwarteng, her longtime ally, and reversed course — twice — on her tax-cutting plans. Kwarteng’s replacement as Treasury head, Jeremy Hunt, then dumped almost all of Truss’ flagship policies. Truss apologized for going “too far and too fast,” but her authority was in tatters, and a growing number of Conservatives openly called for her to go.

In recent days, Britain’s lively, partisan press was unusually united in the opinion that Truss was doomed. The Conservative-backing tabloid The Sun called her “a ghost PM.” The left-leaning Guardian compared the Conservatives to a mutinous ship’s crew.

After The Economist said Truss’ time in control of the government would have “roughly the shelf-life of a lettuce,” the tabloid Daily Star set up a livestream featuring a photo of the prime minister beside a head of iceberg. It asked “Can Liz Truss outlast this lettuce?” — and reported triumphantly that she had not when Truss quit on Thursday.

She will stay prime minister until the party chooses a replacement in the coming week and will have the dubious distinction of being the shortest-serving British prime minister in history. She topped George Canning, who was prime minister for just 119 days in 1827 before he died.

Born in Oxford in 1975, Mary Elizabeth Truss is the daughter of a math professor and a nurse, who took her on antinuclear and anti-Thatcher protests as a child, where she recalled shouting: “Maggie, Maggie, Maggie — out, out, out!”

As an adult, however, she came to admire Thatcher and rebelled against her parents' left-wing views.

She attended a public high school in Leeds in northern England — something that set her apart from her many privately educated Conservative colleagues — and went on to Oxford University.

There, she was president of the university branch of the Liberal Democratic Party. The economically centrist Lib Dems back constitutional reform and civil liberties, and Truss was an enthusiastic member, putting up “Free the Weed” posters that called for decriminalization of marijuana.

After Oxford, Truss joined the Conservative Party — “when it was distinctly unfashionable,” she later said.

She worked as an economist for energy company Shell and telecommunications firm Cable and Wireless, and for a right-of-center think tank. She served as a local councilor in London and ran unsuccessfully for Parliament twice before being elected to represent the eastern England seat of Southwest Norfolk in 2010.

Truss got her first Cabinet job as food and environment secretary in 2014, making her biggest impression with a much-mocked speech in which she thundered that it was “a disgrace” that Britain imports two-thirds of its cheese.

In Britain’s 2016 referendum on whether to leave the European Union, Truss backed the losing “remain” side, though she says she was always a natural euroskeptic. In the years after the vote, she won over Brexiteers with her uncompromising approach to the EU.

When Johnson came to power, he made Truss trade secretary, a role that considerably boosted her profile as she signed post-Brexit deals around the world. She was appointed foreign secretary in September 2021.

A year later she achieved her dream of becoming prime minister — a triumph that proved short-lived.