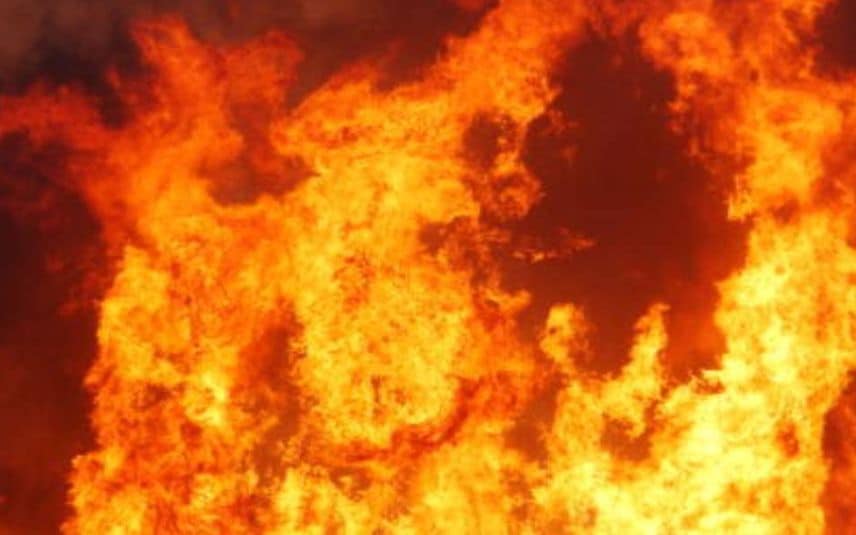 Senior Emirati diplomat Anwar Gargash blamed the Houthis for the attack, saying on Twitter that Emirati authorities were handling the rebel group's “vicious attack on some civilian facilities" in the United Arab Emirates' capital with “transparency and responsibility.”

“The tampering of the region's security by terrorist militias is too weak to affect the stability and safety in which we live," he said.

Three transport tankers caught fire at the oil facility, while another fire was sparked at an extension of Abu Dhabi International Airport.

Police said preliminary findings indicate there were small flying objects, possibly belonging to drones, that fell in the two areas and may have caused the explosion and fire. They said there was no significant damage from the incidents, without offering further details.

Yemen’s Iranian-backed Houthi rebels claimed they were behind an attack targeting “sensitive Emirati facilities." In a press conference late Monday, military spokesman Yehia Sarea said, without offering evidence, that the Houthis targeted the airports of Abu Dhabi and Dubai, as well as an oil refinery and other sites in the UAE with ballistic missiles and explosive-laden drones.

Although the UAE has largely withdrawn its own forces from Yemen, it is still actively engaged in the conflict and supports Yemeni militias fighting the Houthis.

The incident comes as the Houthis face pressure and are suffering heavy losses. Yemeni government forces, allied and backed by the UAE, have pushed back the rebels in key provinces. Aided by the Emirati-backed Giants Brigades, the government forces took back the province of Shabwa earlier this month in a blow to Houthi efforts to complete their control of the entire northern half of Yemen.

Condemnations of the attack on the UAE poured in from across the world.

U.S. National Security Advisor Jake Sullivan said the United States would work with the UAE and international partners to hold the Houthis accountable, saying “we stand beside our Emirati partners against all threats to their territory.”

U.N. Secretary-General Antonio Guterres denounced the assault as “prohibited by international law” and urged all sides “to prevent any escalation amid heightened tensions in the region,” said spokesman Stephane Dujarric. The U.N. special envoy for Yemen Hans Grundberg was headed to Riyadh for meetings with Saudi and Yemeni officials on “the recent military uptick" in Yemen, Dujarric added.

Saudi Arabia and a host of other Arab states decried the assault as “a cowardly terrorist attack." The kingdom, as well as the U.S., U.N. experts and others have accused Iran of supplying arms to the Houthis.

The UAE was a key member of the Saudi-led coalition that has waged war against the Houthis since 2015, trying to restore to power the internationally backed government, ousted by the rebels the previous year.

While Emirati troops have been killed over the course of the conflict, now in its eight year, the war has not directly affected daily life in the wider UAE, a country with a vast foreign workforce that is also home to Dubai, a glitzy city of skyscrapers and five-star hotels.

The airport fire in Abu Dhabi was described by police as “minor” and took place at an extension of the international airport that is still under construction. For years, the airport home to Etihad Airways has been building its new Midfield Terminal, but it was not clear if that was where the fire took place.

Etihad Airways said “precautionary measures resulted in a short disruption for a small number of flights” and that airport operations have returned to normal. Abu Dhabi Airports did not immediately respond to a request for comment.

The other blast struck three petroleum transport tankers near a complex for the Abu Dhabi National Oil Co. in the Musaffah industrial area. The company describes it as a pipeline and terminal facility located some 22 kilometers (13 miles) from the center of the city of Abu Dhabi, where 36 storage tanks also supply transport trucks carrying fuel.

It is also a short distance from Al-Dhafra Air Base, a military installation that hosts U.S. and French forces. U.S. Air Force Brig. Gen. Andrew Clark, the Al-Dhafra Air Base commander for American forces, said in a statement to The Associated Press that “no incidents” affected the base amid the attack.

“U.S. forces are ready and available to assist and support their Emirati partners if requested,” he said.

The location of the ADNOC facility where the tankers caught fire is approximately 1,800 kilometers (1,100 miles) northeast of Saada, the Houthis’ stronghold in Yemen.

The incident comes as South Korea’s President Moon Jae-in is visiting the UAE. The two countries reportedly reached a preliminary deal valued at some $3.5 billion sell mid-range South Korean surface-to-air missiles to the UAE during his trip.

At an event attended by the South Korean president earlier in the day, Emirati Energy Minister Suhail al-Mazrouei declined to comment on the attack but told the AP that investigations were ongoing.

The Houthis have used bomb-laden drones to launch crude and imprecise attacks aimed at Saudi Arabia and the UAE. The group has also launched missiles at Saudi airports, oil facilities and pipelines, and used booby-trapped boats for attacks in key shipping routes.

Earlier this month, the Houthis seized an Emirati-flagged ship in the Red Sea, a crucial route for international trade and energy shipments.

Though there have been civilian deaths in Saudi Arabia from Houthi attacks, there had been no deaths previously reported in the UAE.

The overwhelming number of civilian deaths in the conflict have been in Yemen. The war has killed 130,000 people in Yemen — both civilians and fighters — and has exacerbated hunger and famine across the impoverished country.

Torbjorn Soltvedt, an analyst at the risk intelligence company Verisk Maplecroft, noted that while the Houthis have claimed responsibility for an attack on the UAE, Iraqi-based militias have also threatened the UAE in response to alleged Emirati interference in Iraqi politics.

He said the attack highlights the missile and drone threat faced by the UAE and the region’s other main oil producers. Without a solution to diffuse wider regional tensions, Gulf Arab states “will remain vulnerable to attacks," he added. (AP)