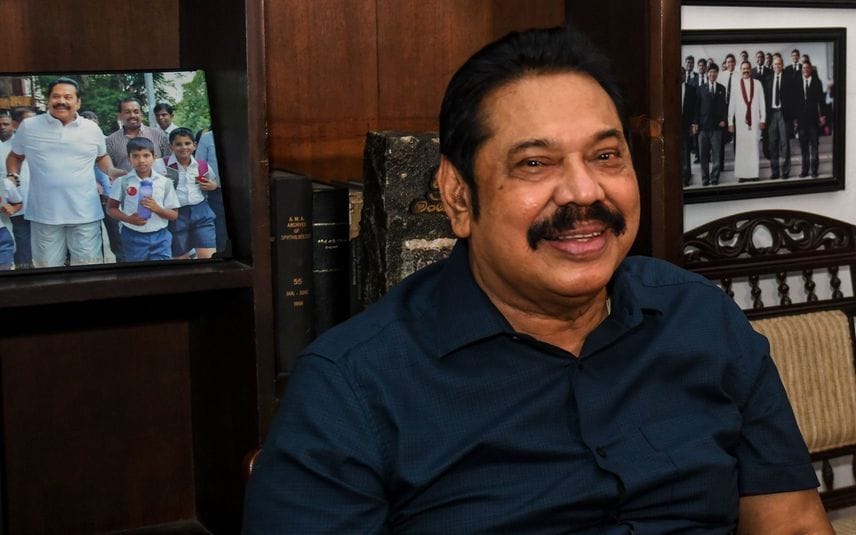 Colombo: Sri Lanka's ex-Prime Minister Mahinda Rajapaksa, who was evacuated from his Temple Trees official residence here, is being protected at the Trincomalee naval base, Defence Secretary Kamal Guneratne said on Wednesday, two days after the country witnessed unprecedented mob violence after the former strongman resigned.

The 76-year-old Sri Lanka People's Party (SLPP) leader, known for his brutal military campaign against the Liberation Tigers of Tamil Eelam (LTTE) during his presidency from 2005 to 2015, is being given protection amidst nationwide protests over the government's failure to tackle the worst economic crisis.

He is also facing calls for his arrest from Opposition politicians for inciting violence against peaceful anti-government protesters who were seeking his resignation as well as that of his elder brother and President Gotabaya Rajapaksa for mismanaging the country's economy.

“He (Mahinda Rajapaksa) was evacuated to the Trincomalee naval dockyard,” Guneratne told reporters in an online briefing.

The Defence Secretary said that Mahinda Rajapaksa was evacuated from his Temple Trees residence in Colombo to the naval dockyard facility in the eastern port town of Trincomalee.

“We saw how they (protesters) tried to get inside Temple Trees that night, we prevented it,” he said.

Gunaratne said Mahinda Rajapaksa will be kept there until the security situation improved, “thereafter he could go to any place of his choice”.

Mahinda Rajapaksa's defiance on Monday not to resign while addressing his grassroot supporters caused mayhem in the country. His supporters suffered a wave of backlash after they attacked anti-government protesters.

He resigned as prime minister on Monday amid unprecedented economic turmoil in the country, hours after his supporters attacked anti-government protesters, prompting authorities to impose a nationwide curfew and deploy Army troops in the capital. The attack triggered widespread violence against pro-Rajapaksa politicians.

At least 9 people died with over 200 being hospitalised. Some 58 of Mahinda Rajapaksa's government colleagues have seen arson attacks on their personal properties.

Mahinda Rajapaksa, who served as the country's prime minister thrice, saw his residence set on fire on Monday.

Mahinda Rajapaksa, along with his wife and family, fled his official residence - Temple Trees - and took shelter at the naval base in Trincomalee.

Throughout the night on Monday, the police fired teargas shells to quell mobs trying to enter the Temple Trees residence. In the early hours of Tuesday, police fired tear gas and warning shots to hold back mobs as security forces moved Mahinda and his family out of his official residence.

As word spread about his reported presence at the Trincomalee naval base, people started a protest near the key military facility.

A curfew is in force across the island nation after mobs burned down the ancestral home belonging to the ruling Rajapaksa family amid mounting anger for their mishandling of the economy, leading to the island nation's worst economic crisis.

Sri Lanka is facing its worst economic crisis since gaining independence from Britain in 1948. The crisis is caused in part by a lack of foreign currency, which has meant that the country cannot afford to pay for imports of staple foods and fuel, leading to acute shortages and very high prices.

Thousands of demonstrators have hit the streets across Sri Lanka since April 9 seeking the resignation of President Gotabaya and his brother Mahinda, as the government ran out of money for vital imports; prices of essential commodities have skyrocketed and there are acute shortages in fuel, medicines and electricity supply.