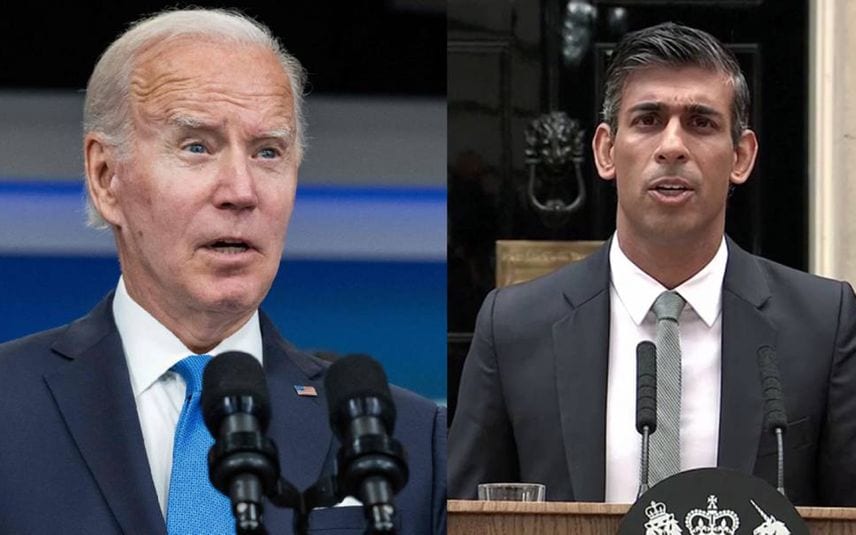 Washington: US President Joe Biden and Britain's new Prime Minister Rishi Sunak agreed in talks Tuesday to work together to support Ukraine and stand up to China, the White House said.

They spoke for the first time hours after Sunak became Britain's third prime minister this year, inheriting an economic crisis after the resignation of Liz Truss after a mere 49-day tenure.

The two leaders also reaffirmed the "special relationship" that exists between the United States and Britain, and said they would work together to advance global security and prosperity, the White House said in a read-out of the conversation.

"The leaders agreed on the importance of working together to support Ukraine and hold Russia accountable for its aggression," the statement said of the war triggered by the Russian invasion of its pro-Western neighbor in February.

The White House said Biden and Sunak also agreed to "address the challenges posed by China," which Washington has identified as its top geopolitical and economic rival on the world stage today.

Downing St had earlier released its own read-out of the call in wich it said the pair "discussed the extent of UK-US cooperation, both bilaterally and in regions such as the Indo-Pacific," as well as the more contentious issue of Northern Ireland.

Earlier on Tuesday Biden had congratulated Sunak in a tweet.

Britain has been a key European ally of the United States in arming and supporting the Ukrainian military as it tries to repel the Russian invasion, which began last February.