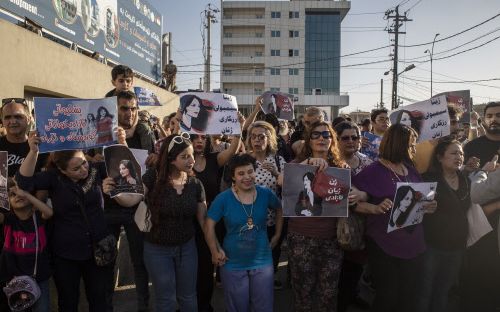 Paris, France: Iranian security forces have killed at least 448 people in a crackdown on protests that began in mid-September, over half in ethnic minority regions, a rights group said on Tuesday.

Of the 448 people confirmed to have been killed, 60 were children aged under 18, including nine girls, and 29 women, the Norway-based Iran Human Rights (IHR) group said.

It said 16 people were killed by security forces in the past week alone, of whom 12 were slain in Kurdish-populated areas where protests have been particularly intense.

The toll has also risen after the deaths of people killed in previous weeks were verified and included, it added. The toll only includes citizens killed in the crackdown and not members of the security forces.

Brigadier General Amirali Hajizadeh of the Islamic Revolutionary Guard Corps earlier Tuesday said more than 300 people had been killed, the first time the authorities have acknowledged such a figure.

The UN Rights Council last week voted to establish a high-level fact-finding mission to probe the crackdown in a move angrily rejected by Iran.

"Islamic republic authorities know full well that if they cooperate with the UN fact-finding mission, an even wider scale of their crimes will be revealed," said IHR director Mahmood Amiry-Moghaddam.

"That's why their non-cooperation is predictable," he added.

The protests erupted after the September 16 death of Kurdish Iranian Mahsa Amini who had been arrested by the Tehran morality police and have become the biggest challenge to the regime since the 1979 revolution.

Amiry-Moghaddam said more than half the deaths were recorded in regions populated by the Sunni Baluch or Kurdish ethnic minorities.

The most deaths were in the southeastern region Sistan-Baluchistan where 128 people were killed after protests which had a separate spark but have fed into the nationwide anger, IHR said.

After that the most deaths were recorded in the western Kurdish-populated Kurdistan and West Azerbaijan provinces where 53 and 51 people were killed respectively, it said.