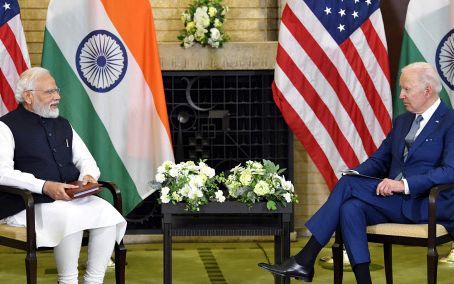 Tokyo: India and the US on Tuesday announced a major partnership to boost cooperation in critical and emerging technologies between their leading security agencies after Prime Minister Narendra Modi and President Joe Biden vowed to work together for a more prosperous, free, connected and secure world.

In a meeting with Biden on the sidelines of the Quad summit in Tokyo, Modi described the India-US relationship as truly a "partnership of trust" and said he was confident that the friendship will continue to be a "force for good" for global peace and stability as well as for the well-being of mankind.

In another significant move, India and the US also extended the longstanding Vaccine Action Programme (VAP) until 2027. Separately, the White House announced India joining the Combined Military Forces-Bahrain as an associate member.

In the talks, Modi invited the US industries to partner with India to manufacture in the defence sector under the Make in India and self-reliant India programmes, adding bilateral trade and investment are expanding continuously, but it is still much below their potential.

The Ministry of External Affairs (MEA) said the meeting "resulted in substantive outcomes" which will "add depth and momentum" to the bilateral partnership.

"The India-USA strategic partnership is truly a partnership of trust. Our shared values, and our common interests in many areas, including security, have strengthened the bonds of this trust," Modi said.

"Our people-to-people relations and close economic ties also make our partnership unique. Trade and investment between us is also expanding continuously, although it is still much below our potential," he said.

The MEA said the iCET would forge closer linkages between the government, academia and industry of the two countries in areas such as artificial intelligence, quantum computing, 5G and 6G, biotech, space and semiconductors.

It said India and the US also extended the longstanding Vaccine Action Programme (VAP) until 2027 to continue joint biomedical research which had resulted in the development of vaccines and related technologies.

A White House readout said Biden condemned Russia's "unjustifiable war" against Ukraine and that the leaders discussed how to cooperate to manage disruptions caused by the war, especially the rise in energy and food prices to protect their respective citizens and the world.

It said the two leaders committed to deepening the "major defence partnership", encourage economic engagement that benefits both countries, and expanding the partnership on global health, pandemic preparedness, and critical and emerging technologies.

It said they looked forward to enhancing partnership to accelerate India's just energy transition, including through the US-India Climate and Clean Energy Agenda 2030 Partnership, especially in the areas of renewables deployment, decarbonising the energy and industrial sectors, zero-emissions vehicles and mobilising related investment in India.

"President Biden condemned Russia's unjustifiable war against Ukraine. The leaders committed to continue providing humanitarian assistance, and discussed how to cooperate to manage disruptions caused by the war in Ukraine, in particular the rise in energy and food prices, to protect their respective citizens and the world," the White House said.

It said the two sides announced India's joining the Combined Military Forces-Bahrain as an associate member.

The White House readout said the US plans to join six of India's Technology Innovation Hubs to support at least 25 joint research projects in 2022 in areas such as artificial intelligence and data science to advance progress in applications such as agriculture, health and climate.

In a tweet, Modi described the meeting as "productive" and said discussions were wide-ranging and covered multiple aspects of India-USA ties including trade, investment, defence as well as people-to-people linkages.

In his televised remarks, Modi said the two countries have shared values and common interests in many areas, including security, and they have strengthened the bonds of trust.

"I am sure that the India-USA Investment Incentive Agreement between us will see concrete progress in the direction of investment. We are increasing our bilateral cooperation in the field of technology, and also strengthening mutual coordination on global issues," Modi said.

The prime minister said both the US and India share the same vision about the Indo-Pacific region and are working to safeguard the shared values and common interests not only at the bilateral level but also with other like-minded countries.

"Quad and IPEF announced yesterday are active examples of this. Today our discussion will impart greater speed to this positive momentum," he said.

"I am confident that the friendship between India and the USA will continue to be a force for good for global peace and stability, for the sustainability of the planet, and for the well-being of mankind," the prime minister said.

In line with Washington's long-term vision for the region, Biden on Monday launched the ambitious Indo-Pacific Economic Framework for Prosperity (IPEF), which is an initiative aimed at deeper cooperation among like-minded countries in areas like clean energy, supply-chain resilience and digital trade.

"Noting that defence and security cooperation is a crucial pillar of the India-US bilateral agenda, both sides discussed how they can further strengthen collaboration," the MEA said.

"In this context, the Prime Minister invited the US industry to partner with India to manufacture in India under the Make in India and Aatma Nirbhar Bharat or self-reliant India programmes which can be of mutual benefit to both countries," it added.

"The Prime Minister welcomed the launch of Indo-Pacific Economic Framework for Prosperity (IPEF) and stated that India is ready to work closely with all partner countries to shape a flexible, and inclusive IPEF taking into consideration the respective national circumstances," it said.

According to a senior official, during a closed session of the Quad summit, Biden praised Modi for handling the Covid pandemic successfully in a democratic manner.

He contrasted India's success with China's failure to handle the pandemic, though both countries are of comparable size, the official said.

US to continue engaging with India over Ukraine: White House