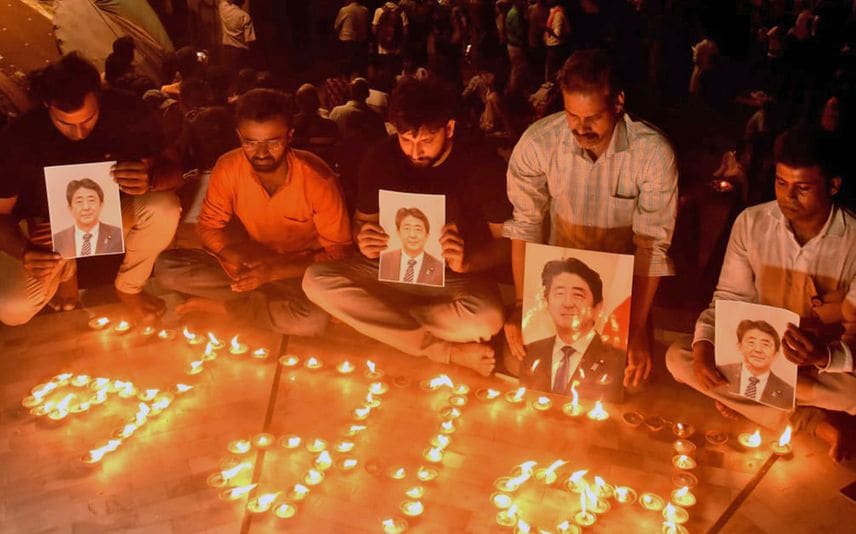 New Delhi: The national tricolour at Red Fort, Rashtrapati Bhavan and Parliament House flew at half-mast on Saturday to observe the day-long state mourning announced in the country as a mark of respect for former Japanese PM Shinzo Abe who was assassinated on July 8.

Abe was shot in Nara city in western Japan on Friday, while he was delivering a campaign speech.

Prime Minister Narendra Modi expressed his shock over the tragic demise of Abe and in a tweet said: "As a mark of our deepest respect for former Prime Minister #ShinzoAbe, a one-day national mourning shall be observed on 9 July 2022,"

PM Modi wrote, "I am shocked and saddened beyond words at the tragic demise of one of my dearest friends, Shinzo Abe. He was a towering global statesman, an outstanding leader, and a remarkable administrator. He dedicated his life to make Japan and the world a better place."

In a blog post titled "My Friend, Abe San" PM Modi wrote, "In the passing away of Abe, Japan and the world have lost a great visionary. And, I have lost a dear friend."

"I first met Abe San in 2007 and since then, we have had so many memorable interactions. I will cherish each of them. Abe San energised the India-Japan relationship. He ensured that Japan is there side by side as New India accelerates its growth," wrote PM Modi.

After the attack on him, Abe was rushed to hospital and initial media reports citing authorities said that it appeared that the former Japanese PM was shot at in the chest. They described his condition as in "cardiopulmonary arrest" and said he showed no vital signs.

Japanese Police arrested a suspect identified as Tetsuya Yamagami, a 41-year-old resident of Nara City, according to local media. A gun that appeared to be handmade was retrieved from the site where Abe was campaigning for a candidate ahead of Sunday's elections for Japan's upper house of Parliament.

Abe, Japan's longest-serving prime minister, stepped down in 2020 citing health reasons. He was prime minister of Japan twice, from 2006-07 and again from 2012-20. He was succeeded by Yoshihide Suga and later by Fumio Kishida.

Japanese prime minister Fumio Kishida earlier in his live address to the country yesterday said "this is not a forgivable act," and that authorities would "take appropriate measures to handle the situation." Kishida further said that the motive behind Abe's shooting is not known. The media outlet citing government sources also reported that Abe's shooting suspect is an ex-member of Japan's Self-Defense Forces.

The Japanese PM also requested everyone to not speculate about any political ramifications at the time.