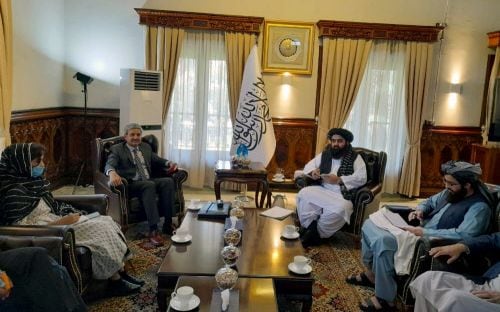 Washington: New Delhi has a set of interests when it comes to engaging with the Taliban regime, the United States said on Monday, days after the first-ever Indian delegation visited Kabul since the hardline group took control over Afghanistan last year.

Last week, India sent a team led by a senior diplomat to Afghanistan to oversee the delivery of its humanitarian aid and meet with senior members of the Taliban regime.

“There are a number of countries around the world that have a discrete set of interests in Afghanistan and who predicate their engagement with the Taliban on those interests,” State Department spokesperson Ned Price told reporters at a press conference on Monday.

The United States will continue to monitor and take steps to increase pressure on the Taliban government to reverse some of its recent decisions in restricting the rights of women and girls, Price explained.

India has no formal diplomatic ties with the Taliban government, but its envoys have met previously with Taliban representatives in Doha, where they have an office.

The template behind India's engagement with the Taliban is based on India's historic ties with Afghanistan, India's Foreign Ministry spokesman Arindam Bagchi has said.

India had sent 20,000 tonnes of wheat, 13 tonnes of medicines, 500,000 doses of COVID-19 vaccines and winter clothing to Afghanistan as humanitarian aid.

New Delhi has been pitching for providing unimpeded humanitarian aid to Afghanistan to address the unfolding humanitarian crisis in the country.

The Taliban rulers captured power in August 2021 following the withdrawal of the US troops after two decades in the war-torn country.