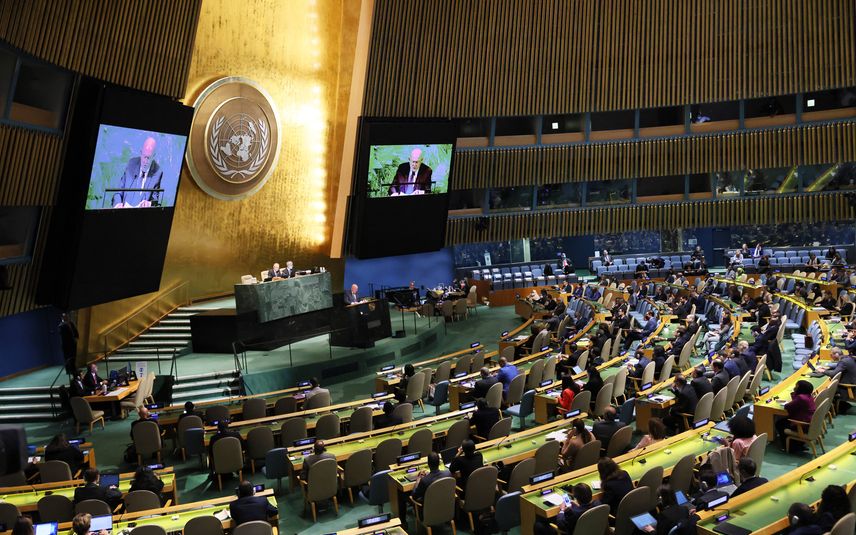 United Nations: India voted to reject Russia's demand for a secret ballot in the UN General Assembly on a draft resolution to condemn Moscow's “illegal” annexation of four regions of Ukraine, with New Delhi favouring a public vote on the text along with over 100 other nations.

The 193-member UN General Assembly on Monday voted on a motion by Albania that action on the draft resolution that would condemn Russia's “illegal so-called referendums” and “attempted illegal annexation” of the Donetsk, Kherson, Luhansk, and Zaporizhzhia regions of Ukraine be taken by a recorded vote.

Russia had demanded that the resolution be voted upon by secret ballot.

Moscow's demand for a secret ballot was rejected after 107 UN member states, including India, voted in favour of a recorded vote.

Only 13 nations voted in favour of Russia's call for a secret ballot while 39 abstained. Russia and China were among the countries that did not vote.

After the motion to hold a recorded vote was adopted, Russia appealed against the ruling of the president of the general assembly.

A recorded vote on Russia's appeal was held and India was among the 100 nations who voted against the challenge made by Moscow.

Russia then sought reconsideration of the decision to adopt the motion submitted by Albania for a recorded vote.

The General Assembly decided not to reconsider the motion after 104 nations, including India, voted against such a reconsideration, while 16 voted in favour and 34 abstained.

Russia's Permanent Representative Vassily Nebenzia said the UN membership had “become witnesses to an outrageous fraud in which the president of the general assembly, unfortunately, played a key role".

"We were not given the floor to make a point of order (the indicator light at our seat is still on), our statement was distorted, and now UN member states are being robbed of their right to express their opinion freely.

“This is an unprecedented manipulation undermining the authority of the general assembly and the United Nations as a whole. Of course, in such circumstances we opted to not take part in the vote,” he said.

India last month had abstained while Russia vetoed a draft UN Security Council resolution tabled by the US and Albania to condemn Moscow's “illegal referenda” and declared the annexation of four Ukrainian territories as invalid.

The 15-nation UN Security Council had voted on the draft resolution on “Illegal So-Called Referenda in Ukraine”, hours after Russian President Vladimir Putin in a ceremony in the Kremlin had signed treaties to annex the Ukrainian regions of Luhansk, Donetsk, Kherson, and Zaporizhzhia.

The resolution failed to get adopted as permanent UNSC member Russia vetoed it.

Of the 15-nation council, 10 nations voted for the resolution and China, Gabon, India, as well as Brazil abstained.

Following Russia's veto, US Ambassador to the UN Linda Thomas-Greenfield vowed to continue to pursue accountability at the United Nations in the General Assembly, where every country has a vote.

UN General Assembly President Csaba Korosi reconvened the emergency special session on Ukraine where a senior US administration official had said that the European Union, on behalf of a cross-regional drafting group of several dozen UN member states, was working on a resolution to be introduced in the assembly and considered at the emergency special session to condemn Russia's actions as a clear violation of the UN Charter and the principles of sovereignty and territorial integrity.

The draft resolution would repeat the demand that Russia withdraws its forces from Ukraine and from the war-torn country's internationally recognised borders and cease its unprovoked war of aggression against Ukraine.

The resolution would also call upon all states, international organisations, and United Nations specialised agencies not to recognise any alteration by Russia of the status of any or all of the Donetsk, Kherson, Luhansk or Zaporizhzhia regions of Ukraine, and to refrain from any action or dealing that might be interpreted as recognising any such altered status.

The action in the UNGA came hours after Russia carried out strikes against multiple Ukrainian cities, including Kyiv where at least 10 people were killed and around 60 others wounded across Ukraine.

In New Delhi, External Affairs Ministry Spokesperson Arindam Bagchi said the escalation of hostilities was in no one's interest and noted that India stood ready to support all such efforts aimed at de-escalation of the situation.

"India is deeply concerned at the escalation of the conflict in Ukraine, including the targeting of infrastructure and deaths of civilians," he said, urging the immediate cessation of hostilities.

India has not yet condemned the Russian invasion of Ukraine and maintained that the crisis must be resolved through diplomacy and dialogue.

India has abstained on votes on the Ukraine conflict in the UN General Assembly and the Security Council. PTI

U.S. approves up to $675M in further military aid to Ukraine