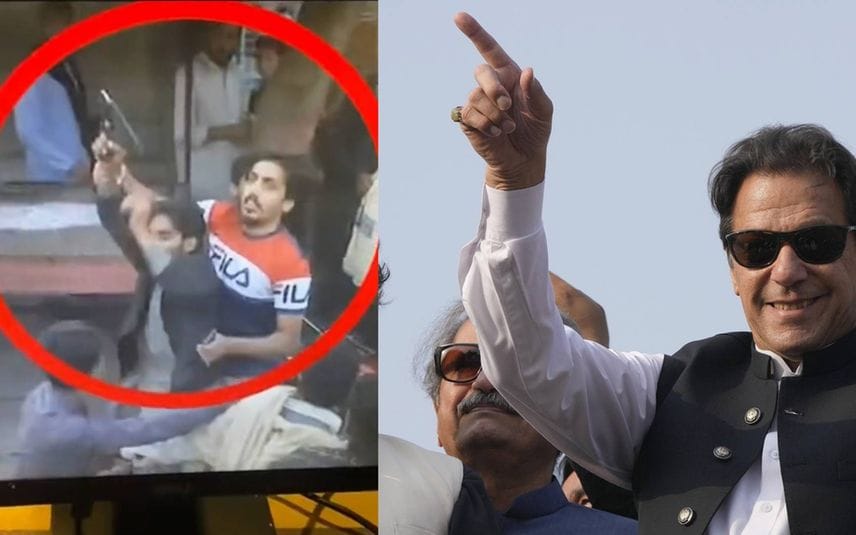 Islamabad: Imran Khan was injured on Thursday when a gunman opened fire on the container-mounted-truck carrying him during his protest march in Pakistan's Punjab province killing at least one person, but the former prime minister was out of danger in what his party claimed was an "assassination attempt."

The incident occurred near Allahwala Chowk of Wazirabad town in Punjab when Khan was leading the long march to Islamabad demanding early elections.

In a statement, the Punjab police said that seven people were injured and one person was killed during the attack on Khan. It added that a suspect has been taken into custody.

Asad Umar, the senior leader of Khan's Pakistan Tehreek-e-Insaf party, told the media that a bullet hit Khan's leg. He, however, didn't blame anyone for the attack.

Senior party leader Shah Mahmood Qureshi said that Khan is out of danger now and added that the "attack was not just on Imran Khan but on the Pakistani nation."

Former information minister Fawad Chaudhry said that the attack on Khan was a "well-planned assassination attempt”.

"It was not 9mm [pistol], it was burst from an automatic weapon, no two opinions about that it was a narrow escape,” he tweeted.

No group has claimed responsibility for the attack on the 70-year-old cricketer-turned politician.

Senator Faisal Javed was injured when a bullet grazed his face during the attack.

According to eyewitnesses, a gunman fired on the container-mounted truck carrying Khan from a close range. They said one person has been arrested from the spot and police took him to an unknown location.

"Imran Khan was shot in the leg but was stable while being taken to hospital. He waved at supporters too," his party said in a tweet.

Geo TV reported that the attacker was identified as Naved. The attacker, in his early 20s and wearing salwar-kameez, had been walking along the container and fired from the left side, the channel said.

The suspect caught by police has said that he wanted to kill Khan because “he was misleading the public.”

"He (Khan) was misleading the people and I could not bear watching it so I… attempted to kill him,” he said in a video confession.

PTI leader Imran Ismail said that he was standing with Khan when he was attacked. "It was a straight fire... the bullet was meant to kill, not to scare," he claimed.

Senior PTI leader Shahbaz Gill said that "Imran Khan is our red line and an attempt has been made to cross that red line." He said that Khan will fight till his last breath.

Prime Minister Shehbaz Sharif condemned the attack and directed the Interior Minister for an immediate report on the incident.

"I pray for the recovery and health of PTI chairman & other injured people. Federal government will extend all support necessary to Punjab govt for security & investigation. Violence should have no place in our country's politics," Sharif tweeted.

He has instructed Interior Minister Rana Sanaullah to seek an immediate report on the incident from the police.

"I thank Allah that he is safe but injured with few bullets in his leg & hopefully non-critical. This attack is shocking, alarming, disgraceful, deceitful & cowardly. May Allah give him health & to all those injured," tweeted Alvi, who belonged to Khan's party before assuming presidency.

The Pakistan Army has issued a statement condemning the attack on Khan. “Firing incident during Long March near Gujranwala is highly condemnable. Sincere prayers for precious life lost and speedy recovery and well being of Chairman PTI Mr Imran Khan and all those injured in this unfortunate incident,” it said.

"I condemn the firing incident on Imran Khan and his companions and pray for their recovery of all those injured,” he tweeted.

Bilawal's mother, former prime minister Benazir Bhutto, was killed during an election rally in Rawalpindi in 2007.

Defence Minister Khawaja Asif said that the firing incident is a manifestation of increasing violence in the politics of the country, in an apparent reference to Khan's aggressive approach in politics.

"I believe today's incident shows the deterioration in our politics,” he said while speaking on the floor of the National Assembly. “The entire nation is condemning this incident”.

He also said use of words like killing and burning in politics by politicians give a licence to their followers to use such methods. He urged the politicians to realise that when they say such things, they sow seeds which will result in a bitter harvest.

Meanwhile, there are reports that supporters of Khan are holding protests in different cities to condemn the attack and show solidarity for their leader.

In Quetta, protesters blocked traffic at the airport road leading to a massive traffic jam in the area. The protesters in Mardan also took to the streets.

In Karachi, protests were reported in several parts of the city such as Sharae Faisal, North Nazimabad, Landhi, Quaidabad, North Karachi, Hub River road and Mauripur.

PTI leader Hammad Azhar has said that party member Ahmad Chattha, who was injured by two gunshots during an attack, is out of danger.

A video footage showed a PTI worker tackling the attacker from behind and trying to grab the gun of the attacker.

Ehtisam, who tackled the attacker, told the media that he forced the gun of the attacker downward and stopped further mayhem.

Initially, it was reported that Khan was safe while some people were injured.

She also said: “The string pullers, the Establishment will also be held responsible by the nation for this murderous attack on Imran Khan.”

Khan, who was ousted from power in April after losing a no-confidence vote in his leadership, has talked about a 'threat letter' from the US and claimed that it was part of a foreign conspiracy to remove him as he was not acceptable for following an independent foreign policy. The US has bluntly rejected the allegations.

He has been demanding early elections and he is leading the long march towards Islamabad to force his demands. The term of the National Assembly will end in August 2023 and fresh elections should be held within 60 days.