The chief secretary said that the Pakistan Army, Frontier Constabulary, and civil administration were conducting rescue operations, but damaged roads are hampering the efforts. 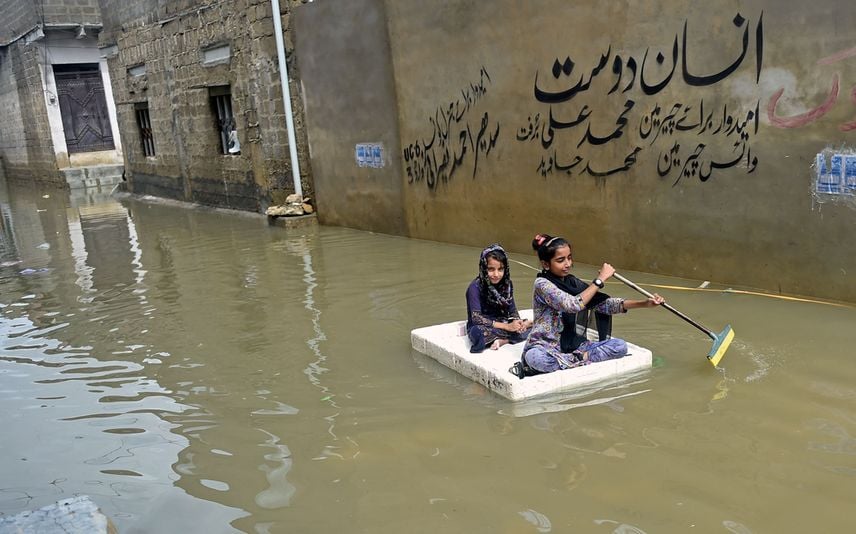 Girls use a temporary raft across a flooded street in a residential area after heavy monsoon rains in Karachi | Photo: AFP

Quetta: The recent spell of monsoon rains, which started on June 1 has claimed as many as 111 lives in Balochistan, the Chief Secretary of the country, Abdul Azai Aqili revealed on Thursday.

Addressing a press conference, Aqili said that heavy downpour in the province completely tore down 6,077 houses and partially damaged more than 10,000 homes -- and these are just the official statistics, the News International reported.

He further said that 16 dams sustained minor or major damages during the rains, while crops and gardens stretching over two acres of land were also harmed.

He said that at least 10 districts in Balochistan were affected due to the rain and around 650 km of roads were damaged in the rains.

Rainwater has accumulated on the main roads and streets and has caused a disruption in the flow of traffic, and the accumulated water has caused several vehicles and motorcycles to break down on the streets.

The downpour across the province has caused several houses and villages to be submerged, standing crops and infrastructure was damaged and many remote areas were cut off from the rest of the population due to destroyed roads, the News International reported.

"The route from Karachi to Quetta has been closed for heavy traffic," he said, urging people to refrain from unnecessary travels, as it was in their best interest.

A National Highway Authority official mentioned that the Hub Bridge was built in 1962 and after the heavy rains filled the dam, it overflowed and in turn, damaged the bridge. He said that new bridges will be constructed on an "emergency basis" in Hub.

The chief secretary said that the Pakistan Army, Frontier Constabulary, and civil administration were conducting rescue operations, but damaged roads are hampering the efforts.

Rescue and relief activities are in full swing in the province, according to the PDMA, adding that camps, ration bags, blankets, and other everyday life necessary stuff have been dispatched to the flood-hit areas.

The top official added that the leaves of all government employees have been cancelled in the wake of the disastrous rains, the News International reported.

But Balochistan's plight might not end there as the Pakistan Meteorological Department (PMD) has forecast more rains in various districts of the province, advising all concerned authorities to remain alert and take necessary precautionary measures during the forecast period. Due to heavy rainfalls across Pakistan, several incidents of people getting electrocuted have come to light.