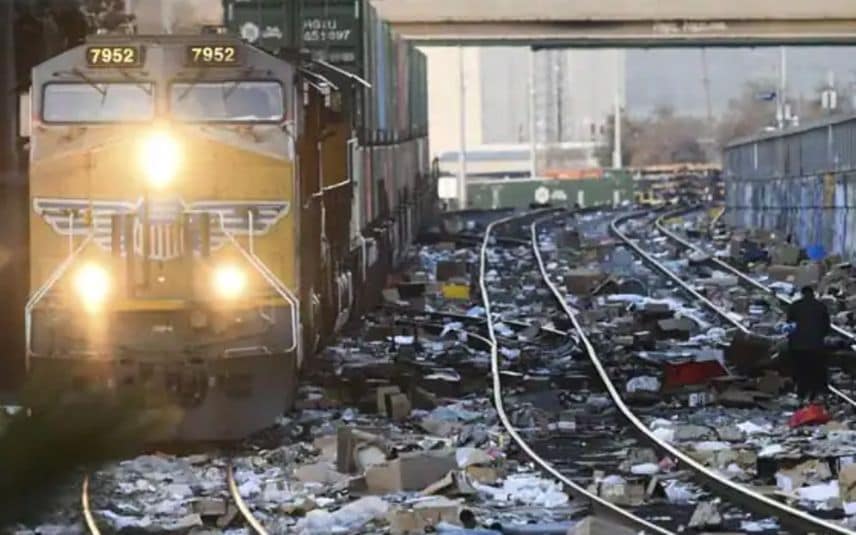 Los Angeles: Dozens of guns have been stolen from freight trains that have been looted in Los Angeles, the city's police chief has said.

Images of the detritus left behind by thieves who break into stationary wagons in the middle of the second biggest city in the United States swept around the world this month.

Now the city's top policeman has said that the bandits got away with more than just Amazon packages.

"People were... breaking into these containers and stealing firearms, tens of firearms," Michael Moore told the Police Commission this week.

"That gave us great concern as a source again of further violence in the city."

An AFP team filmed thousands of gutted boxes on the stretch of tracks near the city center, many from major retailers like Target, and being shipped by carriers including UPS and FedEx.

The thieves wait until the long freight trains stop on the tracks and break the locks with bolt cutters.

They then help themselves to parcels, ditching anything too difficult to sell.

The haul could include anything that moves around the country from or to retailers.

And, the police now say, guns.

Firearms purchased online in the United States cannot legally be shipped to the customer, but can be sent instead to a licensed dealer for pick-up.

Since December 2020, rail operator Union Pacific (UP), whose convoys are being targeted, has seen a 160 percent increase in thefts in Los Angeles County.

"In October 2021 alone, the increase reaches 356 percent compared to October 2020," the operator said in a letter to local authorities seen by AFP.

The phenomenon was accelerated in the run-up to Christmas, as freight volumes rocketed.

According to figures reported by UP, more than 90 containers were vandalized on average each day in Los Angeles County in the last quarter of 2021.

The operator, which manages nearly 280 miles (450 kilometers) of track in Los Angeles County, puts the cost of the damage incurred over the course of 2021 at about $5 million.

The figure does not include losses to customers affected by the thefts.

Houston: Two people were killed and three others critically injured in a shooting at a flea market in Houston, the largest city of the US state Texas, ..

Helsinki: The Finnish government officially announced its intention to join NATO on Sunday, as Sweden's ruling party was to hold a decisive meeting that ..

Colombo: Embattled Sri Lankan President Gotabaya Rajapaksa on Sunday called on all lawmakers to unite and work immediately for a solution to the people's ..