"It was an honour of a lifetime," he said before departing the White House. 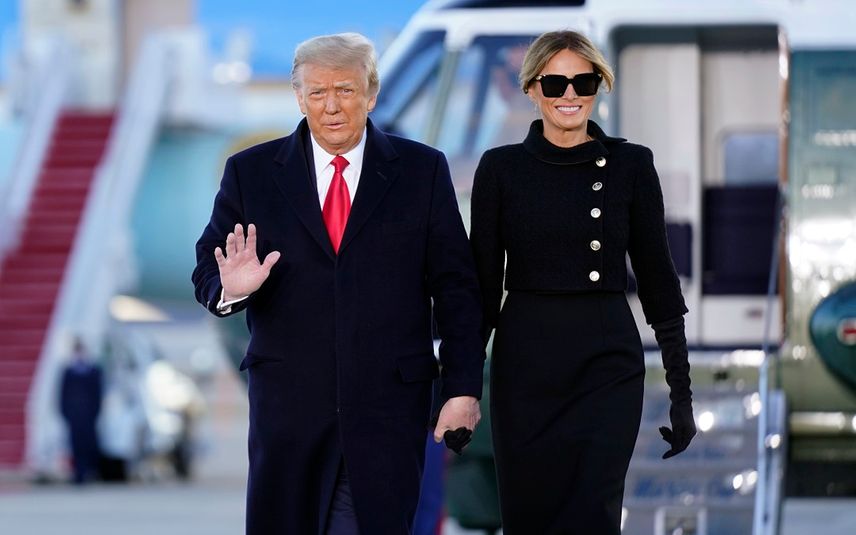 Washington: Donald Trump on Wednesday skipped his successor Joe Biden's inauguration and exited the White House for the last time as the US president to board a flight to his Mar-a-Lago estate in Florida, which will be his permanent home after he failed to win his re-election bid.

Trump, 74, has already announced that he will not attend the inauguration of Biden as President and Kamala Harris as the Vice President, becoming the first president to skip his successor's inauguration since Andrew Johnson in 1869.

He left the White House on the Marine One presidential helicopter along with his wife Melania.

"It was an honour of a lifetime," he said before departing the White House.

Trump, a Republican, became the first US president to lose a re-election bid since 1992. In 1992, George HW Bush failed to win his second bid for the White House.

He will host a farewell ceremony at Joint Base Andrews in Maryland before catching a final flight on Air Force One to begin post-presidential life at his Mar-a-Lago golf club in Palm Beach.

Vice President Mike Pence will not attend Trump's farewell and is instead scheduled to attend Biden's inauguration.

In his last hours, Trump granted clemency to more than 140 people, including his former adviser Steve Bannon, who is facing fraud charges.

He departed when Washington DC is under militarised fortification meant to prevent a repeat of the riot by his supporters earlier this month.

Trump, who has ignored many of the farewell traditions of former administrations, on Tuesday released a video farewell address instead of the typically live, prime-time speech given by past presidents.

Extending his "best wishes" and praying for the success of the new administration in keeping America safe and prosperous, Trump in his farewell address has said that Americans must unify around their shared values and rise above partisan rancour to forge their common destiny.

Trump said he embarked on a mission to make America great again— for all Americans.

"I took on the tough battles, the hardest fights, the most difficult choices because that's what you elected me to do. Your needs were my first and last unyielding focus.

"As I conclude my term as the 45th President of the United States, I stand before you truly proud of what we have achieved together. We did what we came here to do—and so much more," he said.

Trump said to serve as the President has been an honour beyond description.

“This week, we inaugurate a new administration and pray for its success in keeping America safe and prosperous. We extend our best wishes, and we also want them to have luck -- a very important word,” Trump said on the eve of his departure from the White House for his Mar-a-Lago resort in Florida.

In his message that lasted a little less than 20 minutes, Trump addressed the storming of the US Capitol by his supporters on January 6, which is considered as one of the darkest days in the history of American democracy and sought unity from his fellow Americans.

Listing out some of the key accomplishments of his administration from January 20, 2017 to January 20, 2021, Trump said it was more than anyone thought possible.

Trump said as he leaves the White House, he has been reflecting on the dangers that threaten the priceless inheritance all Americans share.

Trump, who lost his re-election bid to Democratic opponent and former US vice president Biden, 78, in a bitterly-fought campaign marked by a resurgent COVID-19 pandemic, never conceded his defeat.

Instead, he made unsubstantiated allegations of fraud in elections, charges dismissed by authorities and some senior members of his own Republican Party.

Trump, who is the only person to assume the US presidency without first having served in public office or in a high military rank, heavily relied on Twitter to deliver his messages to his supporters.

However, his social media accounts were blocked after the deadly attack on the Capitol, leaving him with little alternatives such as friendly news networks to get his message out at the time of leaving the White House.

He was impeached for a second time on the charges of "incitement of resurrection" for the violent storming of the US Capitol by his supporters just days before the end of his four-year term.

He left the White House with a tainted legacy never seen before in American political history.

Meanwhile, some US media outlets reported that Trump may start a new political party as he was disgusted with Senate Republicans who will soon decide whether the ex-president should be convicted during his impeachment trial.

In his farewell message video, Trump vowed his movement will carry on.

The Wall Street Journal first reported Trump's interest in a new party, saying he would call it the Patriot Party."