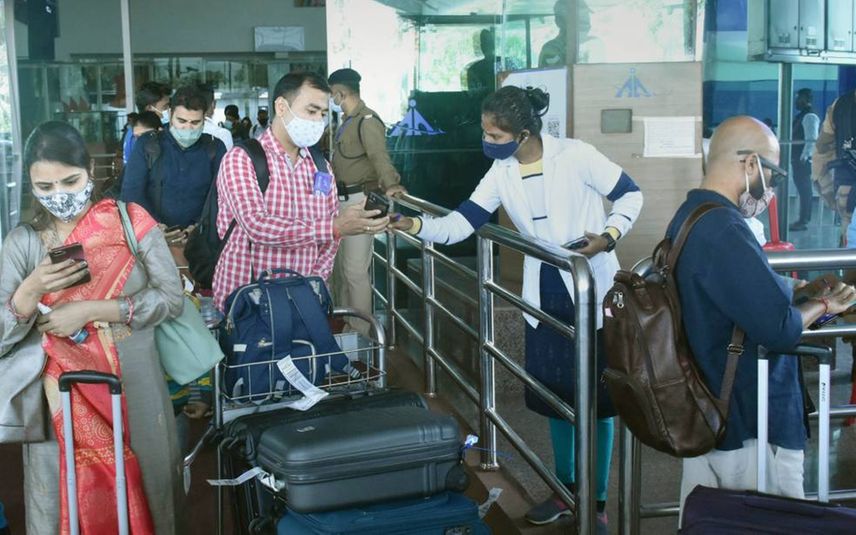 Geneva/Johannesburg: The World Health Organization (WHO) said on Monday the Omicron coronavirus variant carried a very high risk of infection surges, while border closures by more countries cast a shadow over an economic recovery from the two-year pandemic.

Big airlines acted swiftly to protect their hubs by curbing passenger travel from southern Africa, where the new Omicron variant was first detected, fearing that a spread of the variant would trigger restrictions from other destinations beyond the immediately affected regions, industry sources said.

But shares in carriers bounced back with the rest of the market on Monday following Friday's rout as hopes grew that the variant might prove to be milder than initially feared.

The rise in COVID-19 cases and the emergence of the new variant "pose downside risks to employment and economic activity and increased uncertainty for inflation," Powell said in testimony prepared for delivery on Tuesday to the U.S. Senate. Health-related concerns could "reduce people's willingness to work in person, which would slow progress in the labor market and intensify supply-chain disruptions."

U.S. President Joe Biden urged Americans not to panic and said the government was working with pharmaceutical companies to make contingency plans if new vaccines were needed.

Biden said the country would not go back to lockdowns this winter, but urged people to get vaccinated, get their boosters and wear masks.

"This variant is a cause for concern, not a cause for panic," Biden said in remarks at the White House following a meeting with his COVID-19 team. "We're going to fight and beat this new variant."

The United States has blocked entry for most visitors from eight southern African nations. Biden said the travel restrictions would give the U.S. time to get more people vaccinated.

Vaccine hesitancy in the United States and elsewhere has thwarted public health officials' attempts to control the virus.

On Monday, a federal judge ruled that the Biden administration's vaccine requirement for healthcare workers likely exceeded its authority.

The WHO advised its 194 member nations that any surge in infections could have severe consequences, but said no deaths had yet been linked to the new variant.

"Omicron has an unprecedented number of spike mutations, some of which are concerning for their potential impact on the trajectory of the pandemic," the WHO said. The overall global risk related Omicron is "very high," it said.

Further research was needed to understand Omicron's potential to escape protection against immunity induced by vaccines and previous infections, the WHO said.

An infectious disease expert from South Africa, where scientists first identified Omicron, said it was too early to say whether symptoms were more severe than previous variants, but the variant did appear to be more transmissible.

The expert, Salim Abdool Karim, also a professor at Columbia University's Mailman School of Public Health in New York, said existing vaccines were probably effective at stopping Omicron from causing severe illness. Scientists have said it could take weeks to understand the severity of Omicron.

South African cases were likely to exceed 10,000 a day this week, up from barely 300 a day two weeks ago, Karim added.

Health ministers from the Group of Seven bloc of wealthy nations praised South Africa for its "exemplary work" in detecting the variant and alerting others.

Fears the new variant might be resistant to vaccines helped wipe roughly $2 trillion off global stock markets on Friday, but markets calmed on Monday, even after Japan said it would close its borders to foreigners, following a similarly wide ban by Israel. read more

The prospect of a fast-spreading variant has raised fears of a return of the sort of restrictions that shut down a swathe of industries in 2020.

"This is new," said Nissan Motor Co's (7201.T) U.S. spokeswoman, Lloryn Love-Carter. "We're monitoring of course, but we still have a lot of pretty strict COVID protocols in place."

"The people of Africa cannot be blamed for the immorally low level of vaccinations available in Africa – and they should not be penalized for identifying and sharing crucial science and health information with the world," he said.

Guterres has long warned about the dangers of vaccine inequality globally and the risk that low immunisation rates are a breeding ground for variants.

More than 261 million people in over 210 countries have been reported to be infected by the coronavirus since the first cases were identified in China in December 2019 and 5,456,515​ have died, according to a Reuters tally.