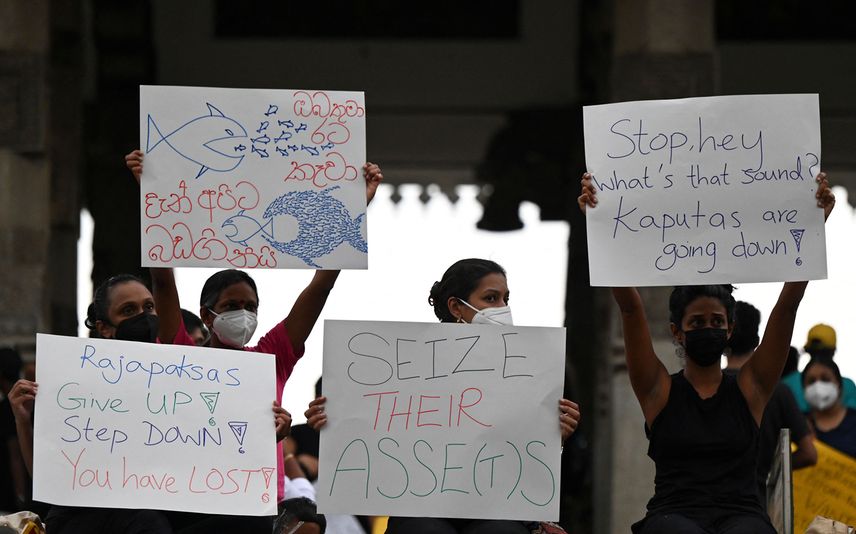 From a protest in Sri Lanka I Photo: AFP

Tel Aviv: The ongoing crisis in Sri Lanka and Pakistan, fueled by the economic mismanagement by the incumbent governments, has once again brought the focus back to the Chinese "debt trap."

Writing for the Times of Israel, Fabien Baussart said the crises are undoubtedly fed by politicians trying to enrich themselves while sticking to power. However, they get short term support from Chinese projects financed by the latter's banking institutions.

These factors add up to become an economic noose around the beneficiary's neck, said Baussart, who is the President of CPFA (Center of Political and Foreign Affairs).

He argued that it is the Belt and Road Initiative (BRI) in Sri Lanka where the government collapsed in the face of street protests caused by severe shortages of essential commodities.

"In Pakistan, it is the much-bigger China Pakistan Economic Corridor (CPEC) is infamously called the "Chinese East India Company", a symbol of colonization. That voice, muted through media's suppression, promises to return as Pakistan goes to the polls later this year," Baussart wrote.

Further, the CPFA President further how the list of countries 'trapped' by Chinese debt is growing.

More than forty countries have sorely felt the impact of the Chinese benevolence ready to pull their people out of poverty, but land them into debts that multiply and become difficult to be serviced, leave alone repaid, he said.

Among them are Laos, Zambia and Kyrgyzstan. They include most less-developed economies, but some like Malaysia are intermediary.

The report has analysed more than 13,000 aid and debt-financed projects worth more than USD 843 billion across 165 countries. According to AidData, over 40 LMIC now have levels of debt exposure to China higher than 10 per cent of their national gross domestic product.

The number of "mega-projects"--financed with loans worth USD 500 million or more--approved each year tripled during the first five years of BRI implementation. Despite larger loans and expanded loan portfolios, BRI has not led to any major changes in the sectoral or geographical composition of China's overseas development finance program, the report said.

As per the report, 35 per cent of the BRI infrastructure project portfolio has encountered major implementation problems, such as corruption scandals, labour violations, environmental hazards, and public protests. By comparison, only 21 per cent of the Chinese government's infrastructure project portfolio outside of the BRI has encountered similar implementation problems, according to AidData.