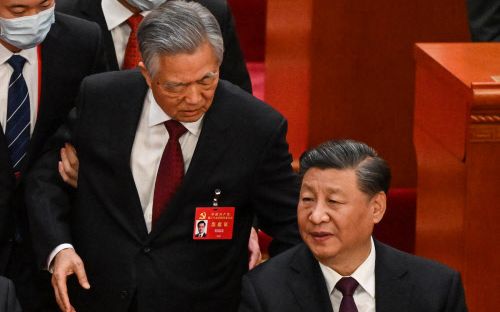 China's President Xi Jinping (R) talks to former president Hu Jintao as he is assisted to leave from the closing ceremony of the 20th Chinese Communist Party's Congress at the Great Hall of the People in Beijing on October 22, 2022 | Photo: AFP

Beijing: China's former President, Hu Jintao was "not feeling well" when he was unexpectedly removed from the closing ceremony of the 20th Congress of China's Communist Party on Saturday, according to Chinese state media.

"Xinhuanet reporter Liu Jiawen has learned that Hu Jintao insisted on attending the closing session... despite the fact that he has been taking time to recuperate recently," Xinhua said on Twitter. "When he was not feeling well during the session, his staff, for his health, accompanied him to a room next to the meeting venue for a rest. Now, he is much better," added Xinhua.

The 79-year-old former leader, Xi Jinping's predecessor, was unexpectedly led out of the hall by two men during the closing ceremony. The circumstances around his departure are unclear, but he appeared reluctant to leave. He has been seen in increasingly frail health in public in recent years.

Xi warns China will not renounce use of ...

Jintao was unexpectedly escorted out of the 'Great Hall of the People in Beijing on Saturday during the closing ceremony of a congress of the ruling Communist Party.

As Hu was being removed, the former leader looked at Xi Jinping and had a conversation that was not audible to the cameras that captured the moment.

Chinese Premier Li Keqiang was also seen next to Xi.

The week-long Communist Party Congress concluded Saturday with the ushering in of a new Central Committee - the party's 200-member central leadership - which will in turn select a new slate of top leaders on Sunday.

China's top leader Xi Jinping is set to begin a norm-breaking third term with an even greater concentration of power, after retiring key party leaders from the top ruling body to make room for his own allies.

Xi is widely expected to be appointed the party's general secretary for another five years on Sunday, paving the way for the potential lifelong rule. At 69, he has exceeded the informal retirement age of 68 for senior party leaders. Xi's name is included in the list of new Central Committee members.

Premier Li Keqiang and Wang Yang - neither of whom is perceived to be close to Xi - are not included in the new Central Committee, meaning they have left China's top ruling body and will go into full retirement. (ANI)