Officers were on the scene investigating the crash at the German chancellery, police spokesman Hartmut Paeth said, but there were no immediate details about injuries or arrests. 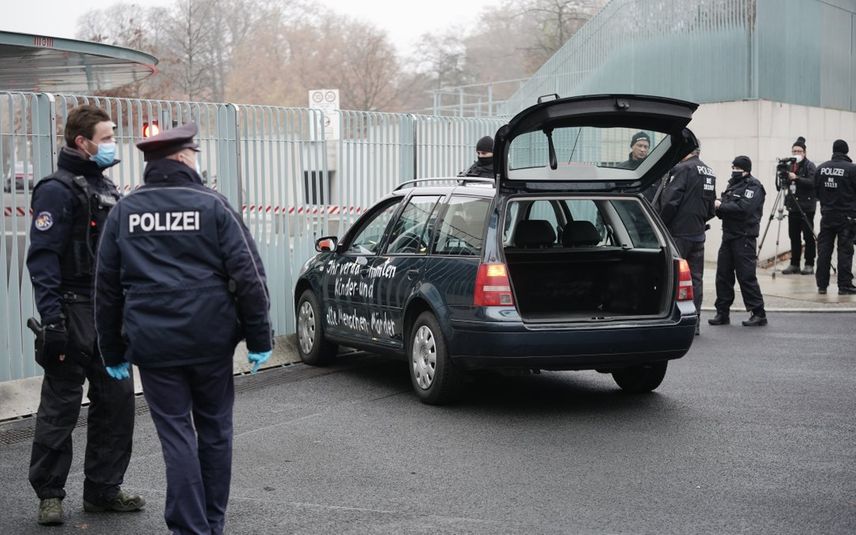 Berlin: A car crashed into the front gate of the building housing German Chancellor Angela Merkel's offices on Wednesday morning, but appeared to have caused little damage, Berlin police said.

Officers were on the scene investigating the crash at the German chancellery, police spokesman Hartmut Paeth said, but there were no immediate details about injuries or arrests.

Rescue crews on the scene confirmed the man driving the car was being treated in an ambulance that remained in front of the chancellery.

The car, a Volkswagen sedan, had the slogan “You damned murderers of children and old people” scrawled in white paint on one side. On the other it said “stop the globalization policies.”

It had license plates from the North Rhine-Westphalia area of Lippe and was driven away by the Berlin fire department showing little sign of damage beyond a few scratches. The metal gate to the chancellery appeared slightly bent.

The chancellery sits in downtown Berlin next to the Swiss Embassy and across from the capital's parliamentary offices. The exterior gate that was hit, which is next to a security office outside the main building, can be accessed from public streets.

There was no immediate indication of what prompted the incident, but it came on the day that Merkel was to meet with state governors to talk about extending a partial coronavirus shutdown that started on Nov. 2.

The government's approach toward slowing the coronavirus pandemic and the restrictions enjoy widespread support among most Germans but they have also prompted occasionally violent protests in some major cities.

Merkel's office had no immediate comment on the incident.