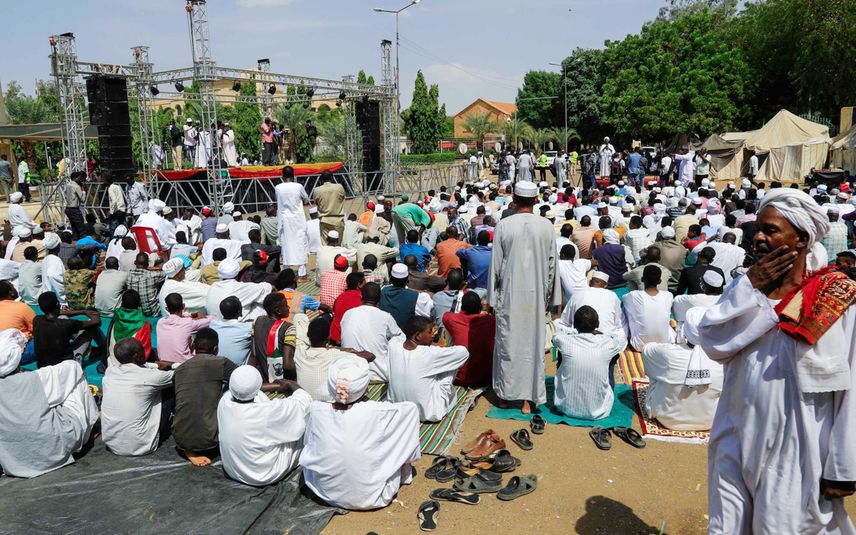 Sudanese pro-military protesters listen to the prayers sermon in front of the presidential palace in the capital Khartoum | Photo: AFP

Washington: The Biden administration on Monday suspended USD 700 million in financial assistance to Sudan following a coup in the African nation that US officials roundly condemned.

The State Department said the full amount of the aid package had been put on "pause" pending a review of the developments in Khartoum that saw the military oust a civilian-led transitional authority and detain many of its members. Spokesman Ned Price called for the immediate release of those arrested, including Prime Minister Abdalla Hamdok, and the restoration of the civilian authority.

"The civilian-led transitional government should be immediately restored. It represents the will of the Sudanese people, as evidenced by the significant, peaceful demonstrations of support," Price said.

"We recognise the legitimate grievances about the pace of the transition, but (the) dismissal of government officials and dissolution of government institutions, both violate Sudan's constitutional declaration and abandon the democratic aspirations of the Sudanese people."

"Military officials should immediately release and ensure the safety of all detained political actors, fully restore the civilian led transitional government and refrain from any violence against protesters, including the use of live ammunition," Price said.

"Any change to the transitional government by force risks assistance and our bilateral relationship more broadly."

The suspended aid was direct financial support intended to help the country transition to a fully civilian government. Price said additional US aid to the country could also be at risk, along with the broader relationship.

Ties between Washington and Khartoum had been warming since Sudan agreed to pay compensation to the victims of the 1998 embassy bombings in neighbouring Kenya and nearby Tanzania that were planned on Sudanese soil by Osama bin Laden's al-Qaida network. Sudan had been removed from the US list of "state sponsors of terrorism" late last year.

It was not immediately clear how much aid the US is providing Sudan in addition to the USD 700 million that was suspended. Many forms of U.S. assistance, including military aid, are still barred due to a decades-old determination that a coup had brought Sudan's now-deposed authoritarian leader Omar al-Bashir to power in 1989. That determination had not been rescinded despite the recent thaw in relations.

Price said the administration was watching developments "very closely" and "will not hesitate" to hold those responsible for the coup to account, including through the restoration of sanctions that had been lifted or eased after Sudan's removal from the terrorism sponsor list.

The coup unfolded just hours after the US special envoy for the Horn of Africa, Jeffrey Feltman, left Khartoum where he had met senior Sudanese military and civilian officials to try to urge a calming of tensions and reconciliation to keep the transition on track.

Price said Feltman warned military chief General Abdel-Fattah Burhan and others that any unconstitutional changes in the government would have consequences. US officials said Feltman had departed about three hours before the arrests began without any knowledge of what was about to happen.

"To be clear, we were not given any heads up about this," Price said. "Clearly an action like this is something that the United States would, and now does, oppose and condemns in the strongest possible terms." (AP)

US says it is expelling 12 Russian diplomats for espionage

Pak to host US, China, Russia meet on Afghanistan on Thursday