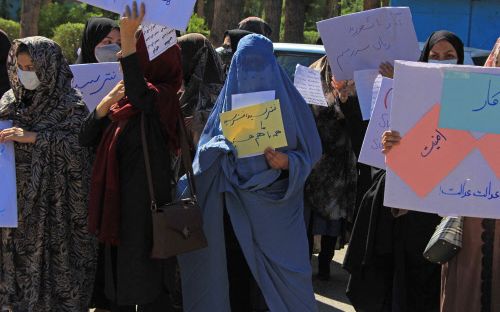 Kabul: After seizing control of Afghanistan in August 2021 the Taliban promised a softer version of the harsh rule that characterised their first stint in power, when women were stripped of most of their rights.

This time around the movement has largely refrained from issuing rigid national edicts, but authorities at a provincial level have introduced rules and guidelines dictating how women should live.

Here are some areas of women's lives impacted by the Taliban's return:

The Taliban say they allow women to work as long as they are segregated from men.

In practice, however, women are effectively barred from employment -- particularly for the government -- apart from in specialised sectors such as health care and education.

Even women working in the private sector complain of being harassed going to and from their offices, while Taliban intelligence operatives frequently visit commercial enterprises to make sure strict segregation is enforced.

Many bosses have also fired women staff out of caution.

In some places, however, small women-only cooperatives have been able to continue -- such as a jasmine processing facility in the ancient western city of Herat, long considered liberal by Afghan standards.

Still, tens of thousands of Afghan women have been made jobless by the Taliban's return, overturning two decades of progress in diversifying all aspects of their employment -- from the police to courts.

The Taliban say all girls are entitled to an education, but the majority of secondary schools at least -- for those aged from 13 to 18 -- have not reopened since August.

Officials now say education for all will resume by the end of March, but an exodus of teachers and a ban on men leading classes for girls means it will be difficult for them to meet that target.

Most private universities have resumed, also while suffering a teacher shortage. But classes must be segregated by sex and there can be no mingling of men and women between lessons.

Some government universities resumed under similar constraints two weeks ago, but there was only a trickle of attendance by women at most facilities.

During their first stint in power, the Taliban made it compulsory for women to wear an all-covering burqa in public, and agents of the feared Ministry for the Promotion of Virtue and Prevention of Vice would lash anyone caught without.

The ministry put up posters across Kabul last month "suggesting" women should at least wear the less restrictive hijab -- but the message was accompanied by pictures of the burqa.

An order was also issued saying women could not travel between cities and towns unless accompanied by a male relative, and taxi drivers were told not to pick up female passengers unless they wore head coverings.

Beauty parlours and fashion boutiques in the capital were booming before the Taliban's return, but they have largely disappeared.

Meanwhile shop mannequins have been beheaded in Herat and billboards featuring the human form taken down because they are deemed un-Islamic.

Television channels have been ordered to stop showing dramas and soap operas featuring women actors, while female journalists must wear a hijab in front of cameras.

A senior Taliban official has said it is "unnecessary" for women to play sport, but they have been wary of formalising that philosophy because funding from the organisations that govern world sport -- including football and cricket -- depends on allowing all sexes to play.

Many of the country's leading singers, musicians, artists and photographers have fled since the Taliban's return, while those who couldn't escape have gone into hiding or are keeping a very low profile.