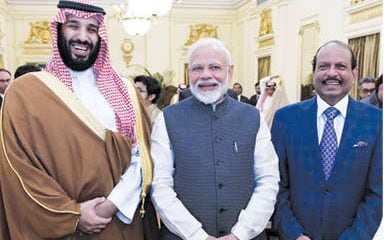 Kochi: The Public Investment Fund (PIF) under the Saudi Arabian government is planning to invest in the Lulu Group International owned by NRI businessman M A Yusuff Ali. This could be a historical achievement as Abu Dhabi government's holding company ADQ invested in Lulu Group only a month ago.

The PIF chaired by Saudi Crown Prince Mohammed bin Salman manages a total fund of 36,000 crore Dollars (approximately Rs 26 lakh crore). This is one of the largest sovereign wealth funds in the world. Sovereign funds are the funds owned by the government. Reliance Retail of Mukesh Ambani also is trying to get PIF funding.

It is yet to clarify how much amount PIF would invest in Lulu Group or how many shares will be purchased. Lulu Group Director of Marketing and Communications V Nandakumar told Mathrubhumi that they cannot respond on the basis of mere assumptions.

Abu Dhabi government's company ADQ had invested Rs 8000 crore (110 crore Dollars) in Lulu Group one month ago. The fund will be used to set up many hypermarkets in Jordan, Morocco and Iraq. ADQ is chaired by Sheikh Tahnoun bin Zayed, the national security advisor and brother of Abu Dhabi Crown Prince Sheikh Muhammed bin Zayed.

Apart from PIF and ADQ, more companies from the Gulf region will invest in Lulu Group and the discussions in this regard is progressing. The arrival of funds proves that Lulu Group and Yusuff Ali have earned trust of the royal families in Gulf countries.

Lulu Group owns 194 hypermarkets in 9 countries and 15 logistics centres in 15 countries. Apart from this, the Group also owns many large scale shopping malls and hotels. The annual turnover is around Rs 55,800 crore. Among the 58,000 staff in the Group, 30,000 are Keralites.