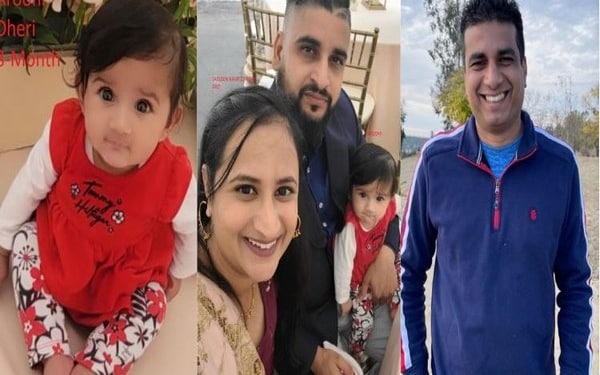 An Indian-origin family of four, incl an 8-month-old child, kidnapped in California, US

Hoshiarpur (Punjab): There has been no call for ransom till now, said a relative of the Indian-origin family who were abducted in California on Monday.

In a conversation with ANI, one of the relatives, residing in Hoshiarpur, Punjab, said, "Their car was found burnt 20-25 km away from their office. Their mobile phones have been found. Till now, no call for ransom received."

Earlier, the California authorities located the missing uncle, Amandeep Singh's truck on fire in a rural area outside Merced on Monday.

Fox News reported that authorities released a photo of a potential suspect wearing a grey sweatshirt with black sleeves and a black hood, a blue surgical mask, dark-coloured pants and dark-coloured shoes and socks.

Police have described the suspect as being armed and dangerous. The site of the alleged abduction is a roadway lined with retailers and restaurants.

"We're asking the public not to approach the suspect or victim," the sheriff's office said in its statement on Monday.

Authorities asked that people not approach the suspect or victims and call 911 if they are seen.

Back in 2019, Indian-origin techie Tushar Atre was found dead in his girlfriend's car hours after the owner of a digital marketing company in the US was allegedly kidnapped from his posh California home. (ANI)

Dream Kerala Project for rehabilitation of expats; selected proposals to be implemented in 100 days