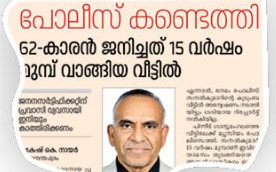 Thiruvananthapuram: Sanal Kumar, a 62-year-old expat businessman has been waiting for his birth certificate from Thiruvananthapuram corporation for the last three years. City police commissioner Sparjan Kumar assured that he will examine whether any lapses occurred in the investigation over the issues that emerged in connection with the birth certificate. The Commissioner said that he is unaware of the reason behind Corporation's decision to approach the police for an investigation on the expat.

Meanwhile, Dr Gopakumar, the registrar for birth and death certificates at Thiruvananthapuram Corporation said that no complaints have been received yet over the three-year-long delay in issuing the birth certificate. If any such complaints were lodged, appropriate action will be taken after a detailed examination, added the registrar.

Nemom native Sanal Kumar applied for his birth certificate in Thiruvananthapuram Corporation on July 18, 2019. After three years, the officials at the Corporation and police reported that Sanal Kumar was born and brought up in another house, which he had bought only 15 years back.

Sanal Kumar, who is currently residing in Jordan told Mathrubhumi that the birth certificate is the right of all and officials must change their mindset while meeting such basic rights of the public.

"All the information regarding me is available in the agencies of the Central government as I own many institutions in various nations. I don't understand why the Corporation could not issue my birth certificate," he questioned.

Meanwhile, the minister for local self-governments MV Govindan said that immediate action will be taken to issue the birth certificate after contacting the corporation.