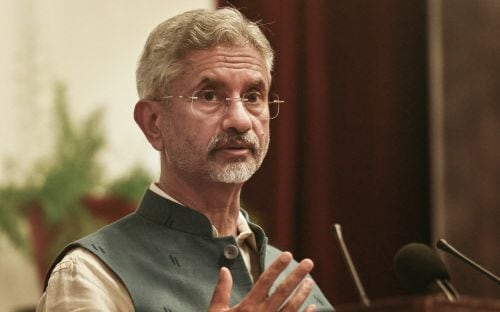 New Delhi: The union government told an all-party meeting on Tuesday that India is naturally worried over the Sri Lankan crisis and there are "very strong" lessons of fiscal prudence, responsible governance and not having "a culture of freebies" to be drawn from it.

At the meeting attended by the representatives of 28 political parties, including those from the Congress, the Left parties and the DMK, External Affairs Minister S Jaishankar, however, dismissed suggestions about such a situation arising in India.

"The ball is in the court of Sri Lanka and the International Monetary Fund (IMF), and they are holding discussions. They need an agreement, then we (India) will see what supportive role we can play," Jaishankar said after the meeting.

He also said Sri Lanka is still in a "very delicate and fragile condition".

Two presentations were made at the meeting -- one by Foreign Secretary Vinay Mohan Kwatra on the Sri Lankan crisis and its political implications and another by Economic Affairs Secretary Ajay Seth on the fiscal health of all the Indian states.

The presentation made by Seth saw some regional parties such as the YSR Congress, the Telangana Rashtra Samiti (TRS) and the Dravida Munnetra Kazhagam (DMK) raise objections, according to sources.

"We do not think that a Sri Lanka-like situation can arise in India. But there was a logic to what we were trying to do, we were trying to highlight the importance of fiscal prudence. So it was not that we highlighted one or two states, we had almost every state. There was no political intent in this," Jaishankar said about the presentation on the states' fiscal health.

"It was a data-based presentation of a comparative situation in India so that every political party and leader leaves with a good and clear message," he said.

Jaishankar concluded the meeting emphasising on the lessons that need to be drawn from the Sri Lankan crisis and said the big lessons to be learnt from it are fiscal prudence and good governance.

"Fortunately, in the leadership of Prime Minister Narendra Modi, we have both in ample amounts," he said.

When reporters asked him about the lessons that are to be learnt from the neighbouring country, Jaishankar said, "Lessons of Sri Lanka are very very strong. They are of fiscal prudence, responsible governance and that there should not be a culture of freebies."

"The reason we took the initiative to request you all to join an all-party meeting was...this is a very serious crisis and what we are seeing in Sri Lanka is in many ways an unprecedented situation," Jaishankar said in his initial remarks at the meeting.

"It is a matter which pertains to a very close neighbour and given the near proximity, we naturally worry about the consequences, the spillover it has for us," he added.

Later, talking to reporters, Jaishankar said longstanding issues such as those related to fishermen also came up during the meeting.

He said the leaders were also informed that the support that India has extended to Sri Lanka since January amounts to USD 3.8 billion.

"No country has given this level of support to Sri Lanka and the initiative that we are taking to help them facilitate their engagement with others such as the IMF," he said.

From the government's side, eight ministers attended the meeting, including Parliamentary Affairs Minister Pralhad Joshi and Minister of Fisheries Parshottam Rupala.

Jaishankar also said there have been some "misinformed comparisons" in the context of Sri Lanka, wherein some people have asked whether "such a situation can happen in India".

"So what we have done is we have asked the finance ministry to make a presentation and brought out a state-wise revenue-to-expenses comparison...unpaid dues of discoms," he said.

The external affairs minister asserted that it was a very open discussion with the leaders of all political parties speaking their mind.

The meeting was attended by P Chidambaram and Manickam Tagore of the Congress, Nationalist Congress Party's (NCP) Sharad Pawar, T R Baalu and M M Abdulla of the DMK, M Thambidurai of the AIADMK, Telugu Desam Party's Ram Mohan Naidu and K Ravindra Kumar, among others.

In the presentation on the situation in Sri Lanka, the government talked about the origin of the crisis, including political turbulence, the economic scenario, unsustainable debt and a decline in foreign reserves.

It also cited data to say that India's lending to Sri Lanka was USD 859.3 million, amounting to 2 per cent of the island nation's debt stock as on April 2021. China accounted for 10 per cent at nearly USD 3.4 billion.

Sri Lanka is facing its worst economic crisis in seven decades, with a severe foreign exchange shortage hampering the import of essentials, including food, fuel and medicines.

The economic downturn has also sparked a political crisis in the island nation after a popular uprising against the government. Acting president Ranil Wickremesinghe has declared a state of emergency in the country.