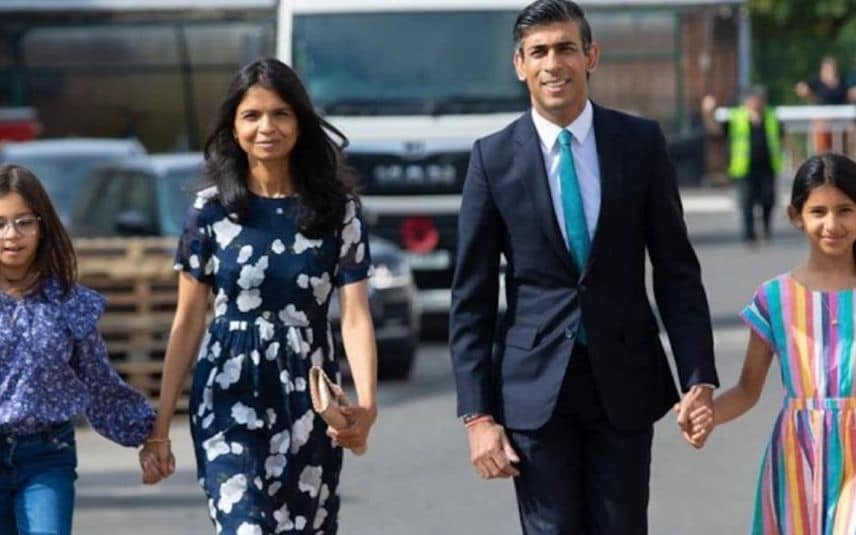 New Delhi: Akshata Murty, Britain's incoming Prime Minister Rishi Sunak's wife whose tax status on income from outside the UK had triggered a controversy, earned Rs 126.61 crore (USD 15.3 million) in dividend income in 2022 from her shareholding in India's second-largest IT firm Infosys.

Murthy, daughter of Infosys co-founder Narayana Murthy, held 3.89 crore shares, or 0.93 per cent, of Infosys at the end of September, according to company filings with the stock exchanges.

Infosys paid Rs 16 per share final dividend for 2021-22 fiscal on May 31, this year. For the current year, the firm this month announced an interim dividend of Rs 16.5, according to the company's stock exchange filings.

Infosys is among the best dividend-paying companies in India. In 2021, it paid a total of Rs 30 per share dividend, which would have given Akshata a total of Rs 119.5 crore in that calendar year.

Sunak, 42, on Sunday won the race to lead the Conservative Party and is now set to become Britain's first prime minister of Indian origin and its youngest leader in modern times.

While Sunak is a British national, his wife Akshata is an Indian citizen. Her non-domiciled status, which allows her to earn money abroad without paying taxes in Britain for a period of up to 15 years, has been a divisive issue in the UK.

Non-domiciled status of Akshata became an issue of discussion in Britain when Sunak first entered the race to become the prime minister in April this year.

At that time, her spokesperson had stated that as a citizen of India, she was unable to hold citizenship of another country and that "she has always and will continue to pay UK taxes on all her UK income."

As the controversy snowballed, she at that time announced that she would pay UK tax on all of her worldwide earnings out of a "British sense of fairness".

Born in her mother Sudha Murthy's hometown of Hubballi in northern Karnataka, Akshata did her schooling in Bengaluru, before moving to Claremont McKenna College in California, where she graduated with a dual major in economics and French.

She did a fashion designing diploma from the Fashion Institute of Design and Merchandising in Los Angeles, which followed a short work stint at Deloitte and Unilever.

She thereafter went on to pursue her MBA at Stanford where she met Rishi Sunak.

The two married in 2009. The couple, who own a vast real estate portfolio, has two children, Krishna and Anoushka.

They live in a £7 million townhouse in Kensington. They also own a flat in Kensington, a mansion in Rishi's Yorkshire constituency and a penthouse in California.

The son of a pharmacist mother and doctor father, Sunak was educated at one of England's most renowned schools, Winchester, and then Oxford. He spent three years at Goldman Sachs Group Inc. and later gained an MBA from Stanford in California, where he met his wife Akshata Murthy.

According to Infosys filings, the promoters hold 13.11 per cent of the company. Of this, the Murty family owns 3.6 per cent (Narayana Murthy holds 0.40 per cent stake, his wife Sudha 0.82 per cent, son Rohan 1.45 per cent and daughter Akshata 0.93 per cent).

Other promoters include co-founder S Gopalakrishnan, Nandan M Nilekani and S D Shibulal and their families.