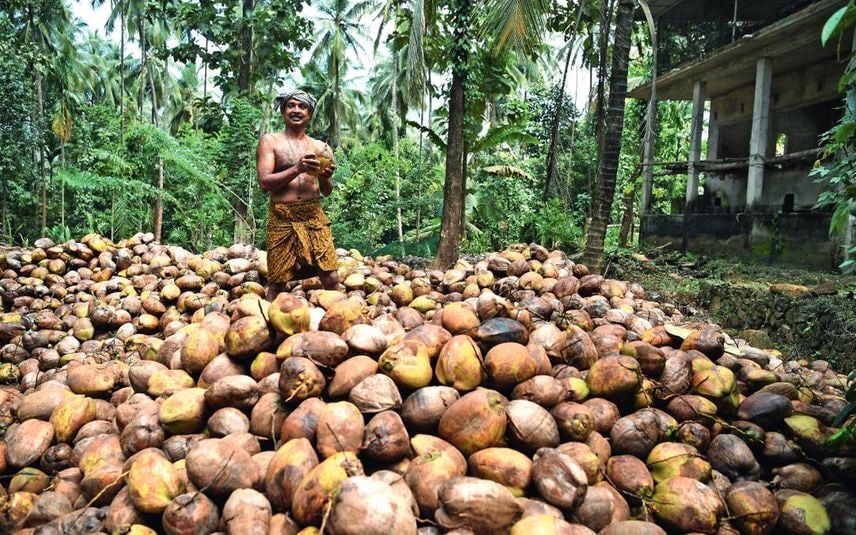 Vadakara: Lapses in Agriculture department in the effective procurement of coconuts surfaced with the steep decline in the cost of raw coconuts in state. Raw coconut price plummeted to Rs 23 for the first time within five years. The coconut price was Rs 46 per kilogram in March 2021.

It has been the first time that the price of coconut has witnessed a steep decline since the government commenced the procurement of raw coconuts at Minimum Support Price.

Farmers receive only Rs 7.66 per coconut, according to the current market price. As per the data prepared by the government, the production cost of a coconut is Rs 9.55 and the actual figures may even hit Rs 13 or more. Hence, the farmer incurs a loss of Rs 900 per quintal in accordance with the present price of coconut.

The government decided to procure coconut at Rs 32 per kilogram when the price dropped to Rs 29 in 2021. However, the inefficient procurement could not make any influence in the market price.

Raw coconuts were procured via Krishi Bhavans when the price of coconut decreased below Rs 14 and soon the price increased to Rs 38 by this.

Price of raw coconut, copra, coconut oil per quintal for the past four years

Though the Centre fixed an MSP of Rs 10,590 for copra (dried coconut kernels), the market price of the same plummeted to Rs 8300 per quintal. With this, the farmers incurred a loss of Rs 2290 for a quintal.

As per government estimates, the production cost of copra touched Rs 8642 per quintal. However, the actual cost may exceed Rs 10,000. The state government had initiated procurement of copra at Rs 10,590. However, the programme expired even before its effective implementation. Even though the farmers demanded to extend the duration of the procurement programme, no action has been taken to address the request.

Raw coconut price plummets to half due to lapses in procurement procedures ...

K Radhakrishnan moves next to CM Pinarayi in Assembly; Rajesh gets seat ...