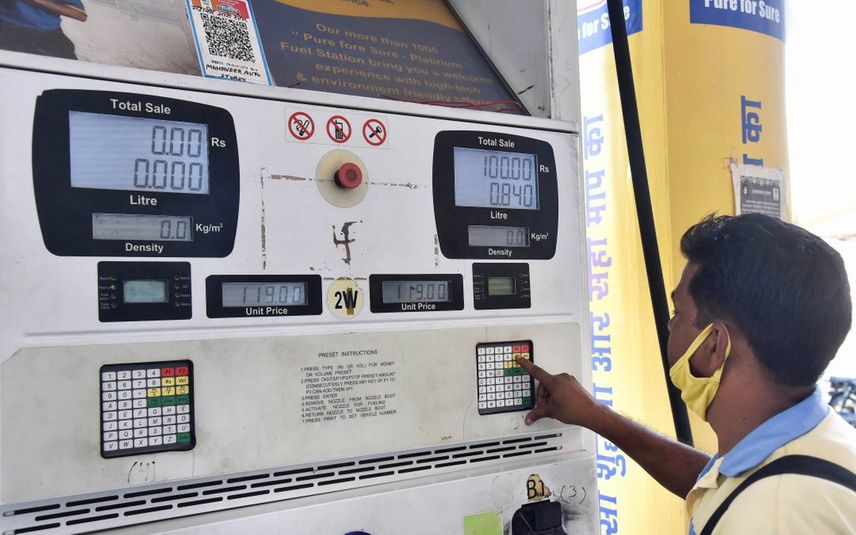 New Delhi: Petrol price has been further reduced by as much as Rs 8.7 per litre and diesel by Rs 9.52 in BJP ruled states and UTs - from Ladakh to Puducherry - as they matched the central government's announcement of a cut in excise duty with slashing of local sales tax (VAT) rates.

Buckling under pressure, the Union government had on Wednesday cut excise duty on petrol by Rs 5 per litre and that on diesel by Rs 10 a litre to give reprieve to consumers battered by record-high retail fuel prices.

This announcement was matched by 22 states and Union Territories cutting VAT rates in different proportions.

This has led to BJP and its partner ruled states witnessing steeper reductions in petrol and diesel prices in comparison to Maharashtra, Delhi, West Bengal and other states that are governed by other political parties, according to a price chart of different locations prepared by state-owned oil firms.

For diesel, the additional reduction warranted by VAT cuts, ranging from Rs 17.5 a litre in Uttarakhand to Rs 9.52 in the case of Ladakh.

Karnataka saw Rs 8.62 a litre cut in petrol price due to VAT reduction and Rs 9.40 in diesel rates, while Madhya Pradesh gave its citizens an additional Rs 6.89 price relief on petrol and Rs 6.96 on diesel. Uttar Pradesh lowered VAT on petrol by Rs 6.96 and diesel by Rs 2.04 a litre.

Wednesday's excise duty cut had translated into a reduction in the price of petrol in the range of Rs 5.7 to Rs 6.35 per litre across the country and diesel rates by Rs 11.16 to Rs 12.88.

In Delhi, the reduction in petrol price was Rs 6.07 per litre, and that on diesel was Rs 11.75, according to the price chart.

The cheapest diesel is in Mizoram at Rs 79.55 a litre.

VAT rates differ from state to state, leading to differential rates of fuel.

The excise duty cut announced on Wednesday night was the highest-ever reduction in excise duty. It rolls back a part of the Rs 13 and Rs 16 per litre increase in taxes on petrol and diesel effected between March 2020 and May 2020 to avoid passing on to consumers the sharp fall in international oil prices at the onset of the COVID-19 pandemic.

That hike in excise duty had taken central taxes on petrol to their highest level of Rs 32.9 per litre and that on diesel to Rs 31.8 a litre.

The tax cut follows an unrelenting hike in international oil prices, pushing pump rates across the country to their highest-ever levels. While petrol soared to above Rs 100-a-litre-mark in all major cities, diesel had crossed that level in more than one-and-a-half dozen states.

The total increase in petrol price since the May 5, 2020, decision of the government to raise excise duty to record levels had totalled Rs 38.78 per litre. Diesel rates have, during this period, gone up by Rs 29.03 per litre.

The relentless increase in fuel prices had been severely criticised by the Opposition parties, particularly Congress, which had demanded that the government reduce its excise duty.

Based on April to October consumption numbers, the loss of revenue to the government due to the excise duty cut will be Rs 8,700 crore per month. This totals to an annual impact of over Rs 1 lakh crore, industry sources said. For the remainder of the current fiscal, the impact would be Rs 43,500 crore.

Data available from the Controller General of Accounts (CGA) in the Union Ministry of Finance showed excise duty collections during April-September 2021 surged to over Rs 1.71 lakh crore, from Rs 1.28 lakh crore mop-up in the same period of the previous fiscal.

After the introduction of the Goods and Services Tax (GST) regime, excise duty is levied only on petrol, diesel, ATF and natural gas. All other goods and services are under the GST regime.

Minister of State for Petroleum and Natural Gas Rameswar Teli had in July told Parliament that the Union government's tax collections on petrol and diesel jumped by 88 per cent to Rs 3.35 lakh crore in the year to March 31, 2021 (2020-21 fiscal) from Rs 1.78 lakh crore a year back.

Rupee falls 22 paise to record low of 79.48 against US dollar