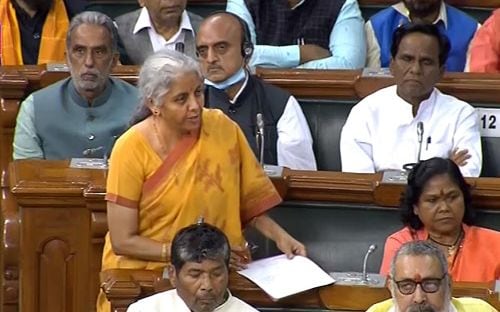 New Delhi: The government on Thursday proposed to tighten the norms for taxation of cryptocurrencies by disallowing set off of any losses with gains from other virtual digital assets.

As per the amendments to the Finance Bill, 2022, circulated among the Lok Sabha members, the ministry proposes to remove the word 'other' from section relating to set off of losses from gains in virtual digital assets.

According to the Finance Bill, 2022, a VDA could be a code or number or token which can be transferred, stored or traded electronically.

The VDAs will include prevailing cryptocurrencies and non-fungible tokens (NFTs) which has gained fad over the past couple of years.

The 2022-23 Budget has brought in clarity concerning the levy of income tax on crypto assets. From April 1, a 30 per cent I-T plus cess and surcharges, will be levied on such transactions in the same manner as it treats winnings from horse races or other speculative transactions.

Also, while computing the income from transfer of VDA, no deduction in respect of any expenditure (other than the cost of acquisition) or allowance will be allowed.

The Budget 2022-23 also proposed a 1 per cent TDS on payments towards virtual currencies beyond Rs 10,000 in a year and taxation of such gifts in the hands of the recipient. The threshold limit for TDS would be Rs 50,000 a year for specified persons, which include individuals/HUFs who are required to get their accounts audited under the I-T Act.

The provisions related to 1 per cent TDS will come into effect from July 1, 2022, while the gains will be taxed effective April 1.

Separately, the government is working on legislation to regulate cryptocurrencies, but no draft has yet been released publicly.

The amendments to the Finance Bill also propose to dilute the penalty provision relating to publication of export-import data.

The Finance Bill had proposed to insert a new Section 135AA in the Customs Act which stated: “if a person publishes any information relating to the value or classification or quantity of goods entered for export from India, or import into India, or the details of the exporter or importer of such goods under this Act, unless required so to do under any law for the time being in force, he shall be punishable with imprisonment for a term which may extend to six months, or with fine which may extend to fifty thousand rupees, or with both”.

The amendments seeks to do away with six-month imprisonment and the Rs 50,000 penalty.

The amendment now reads: "if a person publishes any information, that is furnished to Customs by an exporter or importer under this Act, relating to the value or classification or quantity of goods entered for export from India, or import into India, along with the identity of the persons involved or in a manner that leads to disclosure of such identity unless required so to do under any law for the time being in force, or by specific authorisation of such exporter or importer, he shall be punishable with imprisonment".