5 years of demonetisation: What Modi claimed and what Manmohan predicted

'Mere pyare desvasiyom', Narendra Modi began his historical speech on November 8 of 2016 at 8.00 PM. Not many in the country would have thought it would be a life-changing moment. After five years, we recall Modi's speech and the important reactions of former prime minister Manmohan Singh. 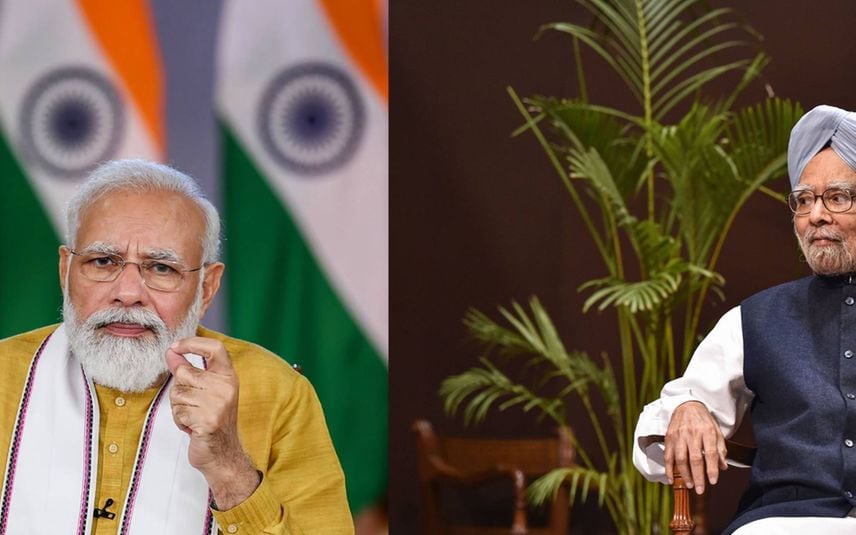 'Mere pyare desvasiyom', Narendra Modi began his historical speech on November 8 of 2016 at 8.00 PM. Not many in the country would have thought it would be a life-changing moment. After five years, we recall Modi's speech and the important reactions of former prime minister Manmohan Singh.

Today I want to make a special request to all of you. You may recall the economic situation in May 2014 when you entrusted us with an onerous responsibility.

We are now No. 1 in the rate of economic growth. But on the other hand, we were ranked close to one hundred in the global corruption perceptions ranking two years back. In spite of many steps taken, we have only been able to reach a ranking of seventy-six now. Of course, there is improvement. This shows the extent to which corruption and black money have spread their tentacles.

The evil of corruption has been spread by certain sections of society for their selfish interest.

Terrorism is a frightening threat. So many have lost their lives because of it. But have you ever thought about how these terrorists get their money? Enemies from across the border run their operations using fake currency notes.

On the one hand is the problem of terrorism; on the other is the challenge posed by corruption and black money. We began our battle against corruption by setting up an SIT headed by a retired Supreme Court judge, immediately upon taking office. Since then

• a law was passed in 2015 for disclosure of foreign black money;

• agreements with many countries, including the USA, have been made to add provisions for sharing banking information;

• a strict law has come into force from August 2016 to curb benami transactions, which are used to deploy black money earned through corruption;

• a scheme was introduced for declaring black money after paying a stiff penalty;

Through all these efforts, in the last two and a half years, we have brought into the open nearly 1 lakh 25 thousand crore rupees of black money belonging to the corrupt. Honest citizens want this fight against corruption, black money, benami property, terrorism and counterfeiting to continue. Which honest citizen would not be pained by reports of crores worth of currency notes stashed under the beds of government officers? Or by reports of cash found in gunny bags?

The magnitude of cash in circulation is directly linked to the level of corruption. Inflation becomes worse through the deployment of cash earned in corrupt ways. The poor have to bear the brunt of this.

High circulation of cash also strengthens the hawala trade which is directly connected to black money and illegal trade in weapons.

To break the grip of corruption and black money, we have decided that the five hundred rupee and thousand rupee currency notes presently in use will no longer be legal tender from midnight tonight, that is 8th November 2016.

This step will strengthen the hands of the common man in the fight against corruption, black money and fake currency.

There may be temporary hardships to be faced by honest citizens. Experience tells us that ordinary citizens are always ready to make sacrifices and face difficulties for the benefit of the nation.

So, in this fight against corruption, black money, fake notes and terrorism, in this movement for purifying our country, will our people not put up with difficulties for some days?

Secrecy was essential for this action. It is only now, as I speak to you, that various agencies like banks, post offices, railways, hospitals and others are being informed. The Reserve Bank, banks and post offices have to make many arrangements at very short notice. Obviously, time will be needed.

In a country’s history, there come moments when every person feels he too should be part of that moment, that he too should make his contribution to the country’s progress. Such moments come but rarely.

I am confident in the 125 crore people of India, and I am sure the country will get success.

Thank you very much. Thanks a lot.

Former prime minister Manmohan Singh on November 24 called the demonetisation a "monumental mismanagement, organized loot, and legalized plunder." Here are the major points from his speech delivered in the Rajya Sabha. To those who said the hardships are only for a short term and in the long-run we can achieve many, he reminded the quote of J M Keynes: “In the long run we are all dead”.

Mr. Chairman sir, I rise to highlight some of the problems that have arisen after the decision to demonetise 500 rupees in 1000 rupee currencies. Prime Minister has been arguing that this is the way to curb black money, to prevent growth of forfeited currency notes, and also to help in control of terrorist financing activities. I do not disagree with these objectives. But what I do want to point out is that in the process of demonetisation, monumental mismanagement has been undertaken with about which today there is no two opinions in the country as a whole.

It is important to take note of the grievances of the ordinary people who have suffered as a result of this imposition on the country overnight by the Prime Minister. And I say so, with all responsibility that we do not know what will be the final outcome. Prime Minister has said that we should wait for 50 days. Well, 50 days is short period. But for the deprived sections of the community, even 50 days of torture can bring about disastrous effects. And that's why about 60 to 65 people have lost their lives.

What has been done can weaken and erode our people's confidence in the currency system and in the banking system. I would love to know from the Prime Minister the names of any countries, he may think of where people have deposited their money in the banks, but they are not allowed to withdraw their money. This alone, I think, is enough to condemn what has been done in the name of greater result in the long run.

And, sir, I would further like to point out that in my opinion, this scheme of monetization, the way it is being implemented, will hurt agricultural growth in our country will hurt small industry will hurt all those people who are in the informal sectors of the economy.

And my own feeling is that the GDP of the country can decline by about two percentage as a result of what has been done. This is an underestimate, not an over estimate.

After all, 90% of our people who are in the informal sector and 55% of our workers in agriculture are feeling distressed. The cooperative banking system, which serves a large number of people in the rural areas is non functional. All these have convinced me that the way the scheme has been implemented, which is a monumental management failure, in fact, is a case of organized loot, and legalized plunder.

On the first anniversary of the demonetisation, Manmohan said demonetisation and GST were badly designed and hastily implemented.

I say it with immense pain and a sense of deep responsibility, that the 8th of November was a ‘Black Day’ for our economy, and indeed our democracy.

It has been suggested many times in the past as one of the methods to eradicate black money. But as a responsible government, we never took such a drastic measure because in our reasoned analysis, the costs of demonetisation always exceeded the benefits substantially.

One must also remember that nowhere in the world has any democracy undertaken such a coercive move, withdrawing 86% of legal tender in one single swoop. Neither would anyone advise to bring out an even more high-value currency note of rupees 2000 after invalidating 500 and 1000 rupee notes.

We know by now that none of the stated objectives of eliminating black money, terror financing and counterfeit currency have been met. To promote a less-cash economy, coercive steps like demonetisation are ineffective. The Cash in Circulation after one year is close to 90% of previous levels. The fact that more than 99% of the demonetised currency came back into the banking system, has punctured the government’s claims. There are also widespread reports of the rich converting their black money into white while the poor suffered.

We saw the impact of demonetisation on the economy when the GDP growth rate dropped to 5.7% under the new calculations. Even this is bound to be a gross underestimate as the pain of the informal sector is not adequately captured in the GDP calculation. Every one percent loss of GDP annually costs our nation 1.5 lakh crore rupees. Think of the human impact from this lost growth -- the lost jobs, the youth whose opportunities have vanished, the businesses who had to shut down and the entrepreneurs whose drive to succeed has turned into discouraged disappointment.

Demonetisation and GST were two blows that have probably pushed millions back into terrible hardship. So they had to turn to the social safety net provided by the MGNREGA, brought in by the UPA.

Domestic interests should not be forgotten while taking global goals, says SC judge to PM