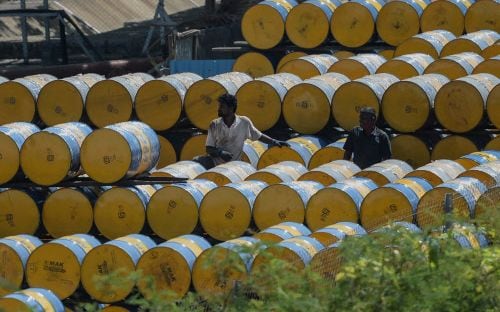 New Delhi: Crude oil prices soared to a 14-year high of $140 a barrel on Monday. With the Ukraine conflict showing no signs of a thaw, the crude oil price is set to surpass its record high of $147.50 a barrel sooner rather than later. How will it impact the Indian economy?

India is heavily dependent on imports to meet its energy requirements. Around 86 per cent of the country's crude oil requirements are met through imports. So clearly, the country's import bills are set to surge. The trade deficit will widen putting pressure on the country's current account balance.

The current account records the value of exports and imports of both goods and services along with international transfers of capital. The trade deficit has widened in recent months. This is expected to lead to a sharp jump in the current account deficit.

However, it's not just the current account balance that will get hurt due to the surge in crude oil prices. It is set to have a much wider impact on the Indian economy.

Brent crude oil price at $120 a barrel would add $60 billion to India's import bills, according to Credit Suisse estimates.

Due to the ongoing Russia-Ukraine conflict, the prices of other commodities like gas, edible oils, fertilisers and coal have also surged. This could add another $35 billion to India's import bills. High import bill of crude oil and other commodities is estimated to stoke inflation by at least one percentage point.

The Economic Survey tabled in Parliament by Finance Minister Nirmala Sitharaman on January 31, projects GDP growth of 8 to 8.5 per cent for the year beginning April 2022 assuming that crude oil prices will average $70 to $75 per barrel during 2022-23.

The crude oil price has reached a level of almost double the government's assumptions of $70 to $75 per barrel.

In fact, the situation seems to be getting worse. Russia has warned that the crude oil price may soar to $300 a barrel if the US and European countries completely ban imports of Russian oil.Crude oil prices in the international markets are inching closer to the all-time high. Brent crude, also known as London Brent, hit an all-time high of $147.50 a barrel in July 2008 during the global financial crisis. The record high for the US West Texas Intermediate (WTI) crude oil stands at $145.29. It was also hit in July 2008.

The crude oil price has more than doubled in the past year. It has risen by more than 30 per cent since Russia started a military operation in Ukraine on February 24.

If the crude oil price remains above $100 a barrel during 2022-23, it will considerably upset India's Budget math. It will have a considerable impact on almost all macro-economic projections made in the Union Budget 2022-23.

As far as managing the high crude oil prices is concerned, there are two possibilities. One, the rise in crude oil prices is passed on to the consumers by a corresponding increase in retail prices of petrol, diesel and other petroleum products. It will have a cascading inflationary impact.

The second possibility is that the government absorbs the entire oil price shock rather than passing it to the end-user. This will lead to an increase in deficits. If the government decides to maintain its fiscal and other deficits commitments, then it would be required to lower the spending on the areas like social welfare and infrastructure development.

According to a Mint Street memo published by the Reserve Bank of India (RBI) in January 2019, a $10 per barrel increase in oil price will raise inflation by roughly 49 basis points (bps) or increase the fiscal deficit by 43 bps (as a percentage of GDP) if the government decides to absorb the entire oil price shock.

Retail prices of diesel and petrol have not been increased in India for the past four months. Analysts say the oil marketing companies, which are controlled by the government, have not hiked the retail prices of diesel and petrol since November 2021 due to state elections. It might have been because of an unofficial diktat. As the elections in the five states are now over, oil prices would be increased sooner rather than later.

The retail price of petrol in Delhi rose to an all-time high of Rs 110.04 a litre and that of diesel to Rs 98.42 a litre on November 2. On November 4, the Central government cut excise duty on petrol by Rs 5 a litre and on diesel by Rs 10. The state governments also reduced Value Added Tax (VAT). This led to a substantial decrease in petrol and diesel prices across the country.

Oil prices have a multiplier impact on inflation. The headline inflation has already crossed the tolerance limit of the RBI and any further increase would force the central bank to tighten the monetary policy. The monetary policy tightening like an increase in policy rates would negatively impact economic recovery.