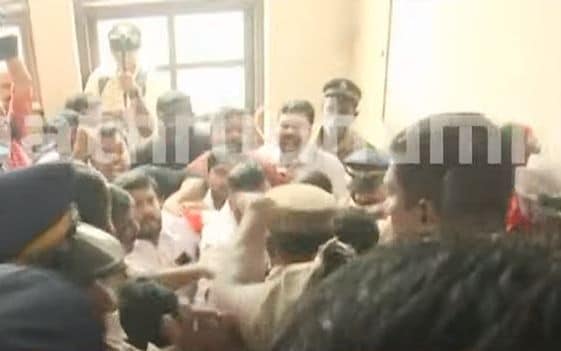 Thiruvananthapuram: Youth Congress workers staged a protest in front of Thiruvananthapuram Municipal Corporation demanding the resignation of Mayor Arya Rajendran following the release of a letter allegedly written by her to CPM district secretary Anavoor Nagappan, seeking a list of candidates for 295 temporary vacancies.

The development comes in the wake of the release of a letter allegedly written (on official letterhead) by her to CPM district secretary Anavoor Nagappan, which sought a list of candidates for 295 temporary vacancies.

However, both Rajendran and Nagappan denied the matter. While, the latter agreed to look into it.

BJP and Congress have decided to seek the resignation of the Mayor for breach of her oath.

This incident has rocked the ruling CPM, which is having its high-level meetings of the state party unit here on Saturday and Sunday.

The letter with the salutation, Comrade, requested the CPM leader to submit a list of party members to be appointed in 295 vacancies in various posts in the health department.

Incidentally, this controversy surfaced at a time when the Mayor was away in Delhi to attend a protest march against the BJP national government by the CPM under the hashtag, "Where is my job,".

"We are told that she is away in Delhi to attend a protest asking for jobs, while in her own domain, jobs are given to their own party members, and these back door appointments have been going on for a while," said Youth Congress leader KS Sabarinathan.

State BJP president KSurendran said the Mayor has to resign for this grave act of corruption.

BJP councillor and Thiruvananthapuram district president VV Rajesh said now that the Mayor has said she has not written such a letter, then she should immediately complain to the Cyber wing and see if the person who did this is brought to book.

"The CPI-M is known for placing its stooges in crucial posts, and the top leadership of the party runs the show, and this is one place where such a thing happens," said Rajesh.