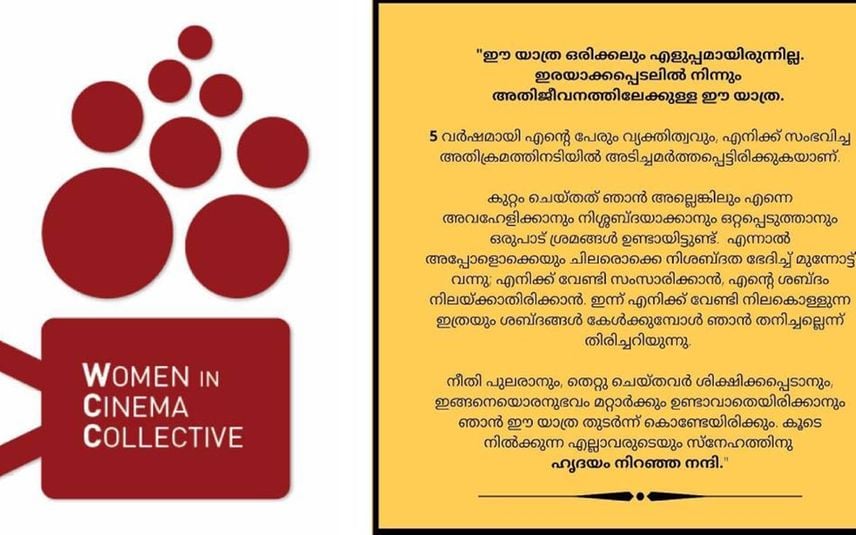 Kochi: Following the offers of 'support' from the big shots of Mollywood, including Mammootty and Mohanlal, to the survivor of the actor abduction case, Women in Cinema Collective has raised some pertinent questions.

While acknowledging the 'newly emerged' support to the actor, WCC flagged its disappointment over the 'delay' in the support.

“We'd still like to make our disappointment known about how this support wasn't forthcoming to her when she needed it most,” WCC said in a Facebook post on Tuesday. Along with that, WCC has put forth some pertinent questions to the film fraternity to know about the scope of their newly emerged support and the future course. The collective pinpoint that they are expecting support and respect beyond social media posts.

Will Malayalam film producers implement POSH guidelines in their companies?

Will the Associations and Unions ensure that their women members are given equal opportunity and treated equitably at work?

Will our male colleagues remain constant allies by using their privilege and power to make sure that our workplaces are fair, healthy and that women are not marginalised?

Meanwhile, WCC also praised the actor for the courage and self-respect she exhibited over the five years. It also points that collective “have no intention of letting go” of the momentum provided by the supporters.